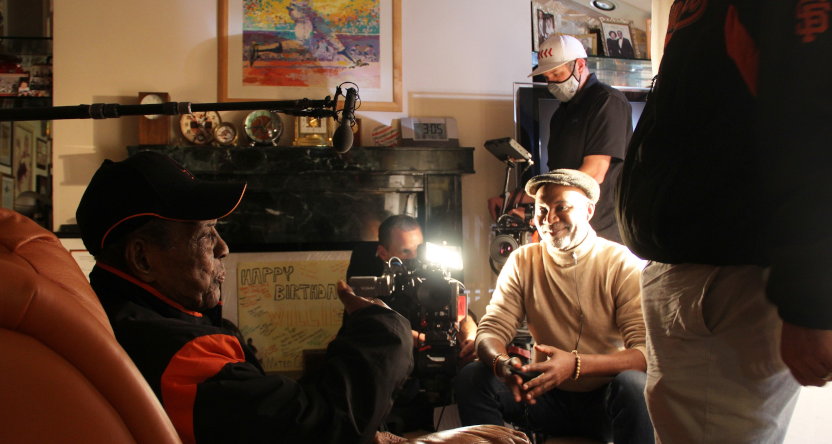 Back in May 2021, Deadline broke the news of an upcoming Nelson George-directed documentary on Willie Mays from HBO Sports, Uninterrupted, MLB and other partners. On Thursday, which marked the 78th anniversary of Mays’ famous over-the-shoulder catch in Game 1 of the 1954 World Series, HBO announced details on just when that documentary (now titled Say Hey, Willie Mays) will air.

The documentary will have its world premiere at the 2022 UrbanWorld Film Festival on October 27. It will then debut on HBO at 9 p.m. ET/PT on Nov. 8 (and will also be available to stream on HBO Max as of that date). Here are quotes from Mays and George from a release:

Mays: “Over the years, the fans have given me so much joy, and I am excited to express my thanks again through this wonderful documentary and its telling of the story of my career and life. I have worked hard and been fortunate to do many amazing things over the course of my life, and I am excited and proud that the people who see this film, including younger fans who never saw me play, will have the chance relive this great journey with me and have few laughs along the way. Watching this documentary brought a proud and grateful smile to my face, and I hope everyone else enjoys it too.”

George: “It’s been one of the highlights of my life to get to talk with and document the life of Willie Mays, perhaps baseball’s greatest player and certainly its most charismatic personality. Not only was he a staple on the Baseball Game of the Week, but crossed over into talk shows and night time entertainment when Black faces were rare. The film is very much a tale of mentorship. Willie was schooled in life and baseball by his father Cat and Negro League players. Later Willie looked out for scores of young Black players including his godson Barry Bonds. An epic American life.”

The film features new interviews with Mays, his son Michael, Bonds, Reggie Jackson, Orlando Cepeda, Juan Marichal, Vin Scully, Jon Miller, Bob Costas, and Mays’ biographer John Shea. It’s billed as a look at Mays’ life on and off the field over five decades, from his start with the Birmingham Black Barons in the Negro Leagues at just age 16 through his time with the Giants in both New York and San Francisco, including the time he missed while serving in the U.S. Army during the Korean War from 1952-53. Mays left a huge mark on baseball, playing professionally from 1948 (with Birmingham) to 1973 (with the New York Mets) and serving as an important ambassador for the game for decades afterwards.

Mays’ career includes 24 All-Star selections, two National League MVP awards (in 1954, his first year back from the war, and 1955), the NL Rookie of the Year award in 1951, 12 Golden Gloves,  a World Series title in 1954, and the Commissioner’s Award (now the Roberto Clemente Award) in 1971. MLB renamed the World Series MVP award after him in 2017. And he produced many legendary highlights, including that 1954 World Series catch:

Mays certainly made an incredible impact on the game, and it’s cool to see him featured in a documentary like this.