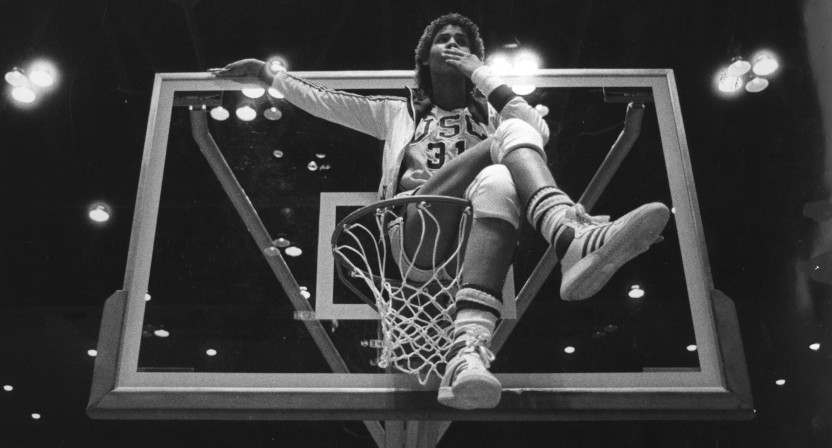 HBO’s latest entry in their line of sports documentaries is Women of Troy. Premiering Tuesday, March 10 at 9 p.m. ET/PT, the Alison Ellwood-directed film aims to cover “the historic and transcendent USC women’s basketball team of the 1980s,” and more specifically, “how the Cheryl Miller-led Trojans changed women’s basketball forever with their up-tempo style and superior athleticism en route to winning consecutive national championships, and ultimately influencing the establishment of the WNBA.” That’s an ambitious approach, but Ellwood pulls it off, and makes a convincing case in the 60 minutes here that Miller and these Trojans were crucial to changing women’s basketball. And going that wide makes this more valuable for a larger audience; this is a film well worth watching not just for those who are interested in Cheryl Miller or USC, but for anyone interested in the story of U.S. women’s basketball.

Right off the bat, Women of Troy makes its case for Miller (seen above in a 1980s photo, courtesy of USC Athletics) as one of the most important athletes ever despite her injury-shortened career. The film starts with ESPN basketball commentator Doris Burke asking viewers to consider how Michael Jordan would have been remembered if he’d been hurt early, and then saying that that’s Miller’s story. And while that may initially come across as a bold claim, the film does a lot to back it up. But it doesn’t go there right away.

After the Miller-focused introduction, Ellwood sets the scene with an interesting look at women’s basketball before Miller and the 1980s Trojans, from old instructional videos to 1976 Olympics footage to an interview with famed Louisiana Tech and Baylor coach Sonja Hogg to current UConn coach Geno Auriemma talking about the Immaculata teams he watched growing up. The Hogg interview is particularly notable for illustrating some of the challenges women’s teams were facing at the time, from her comments on wanting the Louisiana Tech team to be called the Lady Techsters rather than the Bulldogs (so no one would call them bitches) to her remarks on their sleeved uniforms (so no one could see and comment on their bra straps). And current Baylor coach Kim Mulkey is a valuable interview here, as she played for Hogg (including in some of the memorable games covered here) and can speak about her impact, including saying “That lady can sell ice to an Eskimo.”

The film then gets back to Miller and the titular women of Troy, first by illustrating how special Miller already was (with footage from high school games and pick-up games against Reggie and her other brothers, with Burke calling her “a bad motherfucker,” and with shots of the media coverage and scholarship letters she was receiving) and then by talking about how she got to USC. The McGee sisters (Pam and Paula) are a particularly notable interview throughout this film, and Miller said they were the ones who eventually convinced her to join the Trojans with a line of “You can play two years with us or two years against us.” Women of Troy also explores the different backgrounds of that USC team, including how Cynthia Cooper came from the poorer LA neighborhood of Watts and had some challenges fitting in at the school.

Women of Troy provides an excellent look at the USC-Louisiana Tech rivalry, with both of those teams usually ranked #1 or #2 at this point in the 80s. And a particularly interesting note there is the coverage of the Trojans’ regular-season road game that was the first game in the Lady Techsters’ new arena. USC coach Linda Sharp speaks about her desire to play a tough road schedule to prepare her team for the NCAA tournament, and that environment certainly fits, with USC’s Rhonda Windham saying “I’m thinking there’s no way were getting out of here alive” after hearing the crowd reaction when the home team was introduced. But the Trojans won that game, with Miller saying “It felt so good ruining their party,” and that sets up the centerpoint of the film: the 1983 national championship game between USC and Louisiana Tech.

The way Elwood covers that game is smart. Everything before that builds to that point, and we see the Trojans tested in a new way and trailing at the half. But we also see how they respond, with a shift to the press and with some incredible athleticism from Miller. And there’s just enough game footage to make it feel fully covered (well-interspersed with commentary from the various participants) without it feeling over the top. Women of Troy also discusses not just that game, but the implications, particularly with USC player Juliette Robinson’s line of “That respect, we took that!”

After the 1983 championship, the Trojans won again the next year (beating Tennessee in the final). That game gets a bit of coverage here but not a lot, but that also makes sense. It’s somewhat of a similar story to what’s already been told, and Elwood quickly shifts the focus to other things; the 1984 Olympics in L.A. (where a women’s team led by Miller, Cooper and Pam McGee won gold, and where McGee draped her medal around her excluded sister’s neck afterwards), Cooper briefly leaving school after the fatal stabbing of her brother and assistant coach Fred Williams’ trip to her neighborhood to talk her into coming back, and the lack of U.S. professional opportunities for players after college, which meant they had to go overseas. And then the film covers Miller’s incredible star power at that point, and then the career-ending injury she suffered playing pickup basketball with USC football players.

What’s interesting is that right after Miller’s injury, the film still has 12 minutes to go. And at first, it seems like that’s going to be too long; there are some comments from the likes of NCAA/WNBA star turned TNT analyst Candace Parker and ESPN writer Jackie MacMullan on Pat Summitt, and comments from Auriemma and player-turned-ESPN analyst Rebecca Lobo on UConn, all of which are relevant to the larger women’s basketball story but not so much to the USC team of the 80s. But Elwood pulls this together quite well, illustrating the role those figures played in further boosting women’s basketball and leading to the launch of the WNBA.

And while Miller’s particular story shifts more to her work as a coach, an executive, and a broadcaster (which still winds up being quite important), it’s another one of her USC teammates in Cooper who winds up being incredibly important as a WNBA player. The film does an excellent job with Cooper’s story, showing what it was like for her to head overseas to Italy thanks to a lack of opportunities in the U.S., and then showing how she got into the WNBA (after calling people there herself), went on to win two league MVPs, four titles and four playoff MVPs with the Houston Comets, and was the first WNBA player inducted into the Naismith Memorial Basketball Hall of Fame.

There’s a good interview in here with current BIG3 coach and famed coach and player Nancy Lieberman about Cooper in the WNBA, with Lieberman saying “She had an old man’s game, but it was brilliant. You couldn’t stop her.” And as throughout Women of Troy, Elwood shows a great ability to use relevant highlights to illustrate the comments about particular players; as Lieberman’s saying this, you see some of the tricks Cooper managed to pull off, and how tough it was for opponents to handle her. But for all her success, Cooper says she’s still disappointed that injury stopped Miller, who she thinks could have been even better: “It’s just a shame that the world didn’t get a chance to see Cheryl Miller play professional basketball, because Cheryl Miller is the best to ever play women’s basketball.” Coming from someone as accomplished as Cooper, that means a lot, and it helps reinforce this film’s thesis on how important Miller and her USC teammates were.

And speaking of that thesis, that’s also all tied nicely together by the end, with some smart comments on the increased visibility women’s basketball (both collegiate and professional) has picked up since the USC teams of the 1980s. There’s more to it then just them, of course, with the likes of Hogg, Summitt, Auriemma, Mulkey and their teams also playing huge roles. But Women of Troy does well to both include those other stories and perspectives while still making a case for the importance of Miller, Cooper, the McGees and the other 1980 USC players, and how much attention they brought to the women’s game. As Mulkey says near the end, “We went from in our era one game, one final four a year, to every night, you can find women’s basketball on TV.” Women of Troy makes a compelling case that Miller and the Trojans had a lot to do with that, and it’s a very worthwhile watch for anyone interested in women’s basketball.