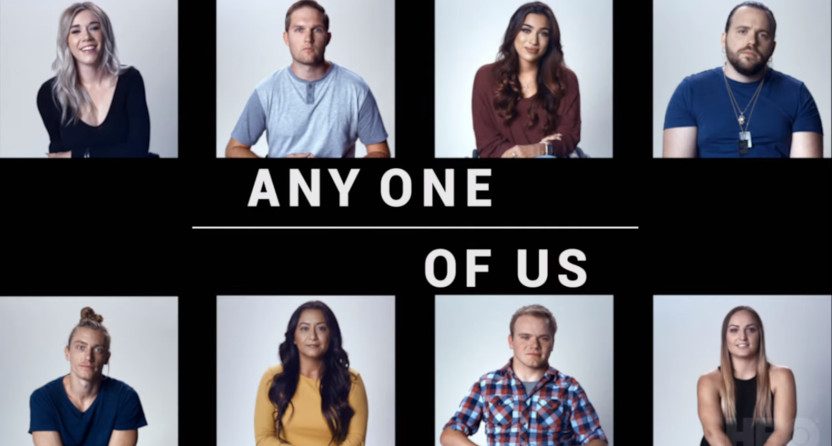 Right from the start, Any One Of Us illustrates how quickly life can change. The Fernando Villena-directed documentary, from Red Bull Films and premiering on HBO Tuesday night at 9 p.m. Eastern, is a look at famed mountain biker Paul Basagoitia’s 2015 spinal cord injury and his recovery journey, but it goes well beyond that, bringing in the stories of seventeen others who have faced spinal cord injuries, and how their experiences compare and contrast to Basagoitia’s. And the film’s opening gets directly to that.

Any One Of Us starts with a video Basagoitia recorded on the morning of his accident, talking about his excitement to compete in the 2015 Red Bull Rampage event. Then, linked with footage of Basagoitia preparing for his run down the mountain, we see and hear the other survivors talking about how their spinal cord injuries happened, in everything from surfing to diving to childbirth to car accidents and falls. Six minutes into the 85-minute documentary, we see Basagoitia being airlifted to hospital, and the story moves on to the recovery efforts of him and these other survivors.

One of the most important decisions here is the way footage of Basagoitia’s recovery journey (much of which he filmed himself) is interspersed with footage of these other survivors (Steph Aiello, Aaron Baker, Jesse Billauer, Russel Burke, Tobias Forrest, Chelsie Hill, Patrick Ivison, Samantha Lopez, Mike Mac, Xander Mozejewski, Vanessa Osman, Morgan Ott, Sarah Petterson, Cynthia Ramirez, Annette Ross, Ron Weinreich, and Sam Willoughby) talking about their own challenges and experiences. A message the film makes very clear is that each spinal cord injury is highly individual, and that there’s no universal level of recovery people can hit, and that’s particularly reinforced by these other stories.

Forrest says in the documentary “Everyone is a snowflake, every individual and their injury is different, and acts and reacts differently,” and Ivison says “There’s no way for any person to understand how another person is experiencing this injury.” And Basagoitia told Esquire‘s Brady Langmann “That’s the scariest thing about that injury. I have a lot of friends that burst fractured the exactly same vertebrae that I did, T12, but our outcomes are one hundred percent different.” And that makes the decision to tell all of these stories alongside Basagoitia’s story a strong one; it reinforces that this journey isn’t just step after step along an obvious path, but rather a scramble up an unmarked hillside with no certainty of getting anywhere.

That’s also something that makes Any One Of Us stand out; it’s not a retroactive documentation of “this is how someone recovers from a spinal cord injury,” but an in-the-moment look throughout at the struggles Basagoitia faces, the discouragement he feels, and the uncertainties ahead for him. And the immediacy of the footage helps pull viewers in, and provides a real look at the battles he’s fighting. The film also provides an intimate look at Basagoitia’s physical challenges and at his emotional challenges throughout this journey, plus a look at how his journey affects his relationship with his girlfriend and his family, and context from other survivors on issues they’ve faced on all of those fronts.

It’s also powerful to see Basagoitia being honest about how he feels and not just putting on a brave face. Throughout his recovery journey, he’s real with the camera about what he’s feeling and what he’s battling. And at one event with supporters, he says “This fucking injury sucks. Hate it. Not going to lie. Every day I cry. I wake up, I’m devastated by it. But you guys keep me plugging away and trying my hardest to get back on my feet, and I will.”

Any One Of Us isn’t a light watch, but it’s an extremely worthwhile story and one that’s told very well. And it helps illustrate what can happen with spinal cord injuries, how drastically they can alter lives, and how challenging the path to any level of recovery can be. Basagoitia told Langmann that part of his reason for documenting this was the lack of information that was available to him on what might be ahead:

“When I started to figure out: This is my new life, this is what I’m going to do, it caught me off-guard really heavily. And I knew I wasn’t the only person that didn’t know about that situation, so I thought it would be important to showcase those things that go behind closed doors. And coming to find out that there’s no book about spinal cord injuries—as far as recovery—what to expect and all that. That’s when I was like, Man, I think I can help some people out. Like here I am Googling things, trying to find videos, trying to figure out what my future looks like and there was really nothing there.”

Because of how individual spinal cord injuries are, Basagoitia’s story isn’t going to be an exact blueprint for others. But the stories from him and others presented here illustrate many of the challenges out there for SCI survivors, and Any One Of Us helps shine a light on these injuries and what they can mean. It tells an important story, and does so in a remarkable way. And it’s well worth your time.