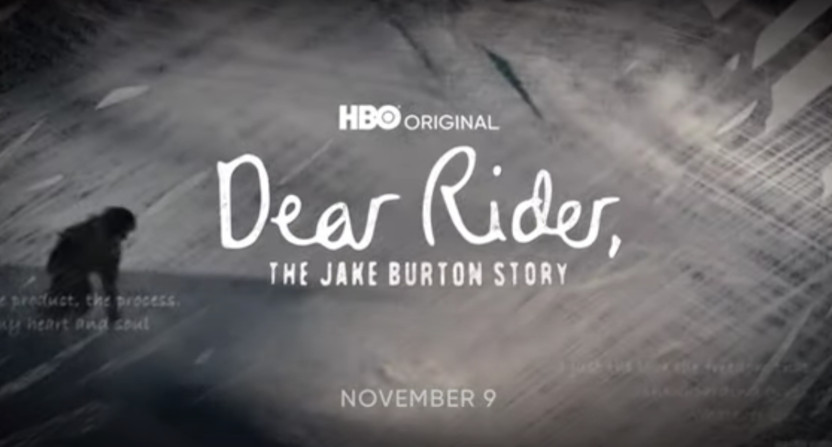 There are a lot of threads running through Dear Rider, the HBO/Red Bull Media House documentary on Jake Burton Carpenter, Burton Snowboards, and the history of snowboarding that premieres Tuesday on HBO (9-10:30 p.m. ET/PT) and HBO Max. Dear Rider covers more than four decades of snowboarding and history, from Burton Carpenter’s founding of the company in 1977 and his initial struggles convincing resorts to allow snowboarders on their hills through the launch of the Burton U.S. Open through snowboarding making it to the Olympics, and it also covers Burton’s personal history, from his childhood and family life through his later struggles with Miller Fisher Syndrome and cancer (the latter of which took his life in 2019). Director Fernando Villena told AA recently that “The problem that you can run into, and we did, was trying to tell too many stories, do too many things, juggle too many balls,” but that they found their throughline by focusing on this history through Burton Carpenter’s own story. And that approach winds up working quite well.

Part of what’s interesting here is that while Burton Carpenter and his company are well-known through much of the professional snowboarding community (and Dear Rider shows that off well with a litany of pros appearing to talk about him and his influence, including Shaun White, Mark McMorris, Kelly Clark, Danny Davis, Scotty James, Jamie Anderson, Terje Håkonsen, Hailey Langland, and many more), more recent recreational snowboarders may know the company but not the man, and some people may not have heard of either. But Dear Rider makes a compelling case for Burton Carpenter and his company as key to making snowboarding what it is today.

The film doesn’t present Burton Carpenter as the only figure involved in this growth. His rivalry with Tom Sims and Sims Snowboards is well-covered, as is the way that established ski manufacturers got into the snowboard business. And several other key Burton figures receive a lot of attention as well, including Jake’s wife Donna Carpenter, Austrian and European figure Hermann Kapferer, and board designer Michael Jager. But this is still largely a story about Jake Burton Carpenter, the “badass grandpa” and “godfather of snowboarding” (both comments made about him in the film), and it’s one that does a good job of presenting him both to those already familiar with him and those who are learning about him for the first time.

The overarching story here is fascinating, especially for the parallels between Burton Carpenter’s personal and corporate rise and snowboarding’s overall rise. It’s remarkable to see Burton Carpenter talk (in archival footage) about going from making snowboards by hand himself, coming back from some sales trips with more snowboards than he took, and selling 350 in the first year, then 700 the next year, to actually running a corporate empire, putting on events like the Burton U.S. Open, and helping to get snowboarding into the Olympics.

. It’s also remarkable to hear about how the only ski hill that would permit snowboarders at first was the Stratton Mountain Resort (in the same town where Burton was based), and that it required the Burton staffers to instruct and certify prospective snowboarders before they were allowed on the hill. From a 2021 perspective, that seems unfathomable, with snowboarding such a key component of every ski resort’s business now. But that particular story helps illustrate how much of an uphill climb it was to get to this point. Here’s a trailer for the film talking about some of those early days:

It’s also notable that Dear Rider does not paint Burton Carpenter as infallible. While the portrayal of his rivalry with Sims is focused on his perspective, there’s enough there to at least show where Sims and his supporters were coming from. And one area where Dear Rider does quite well is in showing the consequences of Burton’s acquisition of a snowboard patent, initially a shot at Sims, but one that wound up turning many smaller snowboard companies against him. Burton Carpenter calls that the “biggest PR fuckup of my life,” and he’s not wrong, but it speaks well for this film that it can show that and discuss that rather than stick to only the positives.

Overall, Dear Rider is going to be a tremendous watch for anyone interested in snowboarding, or interested in extreme sports, or interested in the business of extreme sports. It’s not a comprehensive snowboarding history (which is necessary, given how much is actually covered here; making it any more sprawling would have hurt the film), but it still has a lot to offer on that front. And it’s a very good discussion of Burton Carpenter, his life, and his company. Burton Snowboards remains a prominent snowboarding company today, and this is a great look at how they got there, and at the man who paved the way for so much of what that sport is right now.