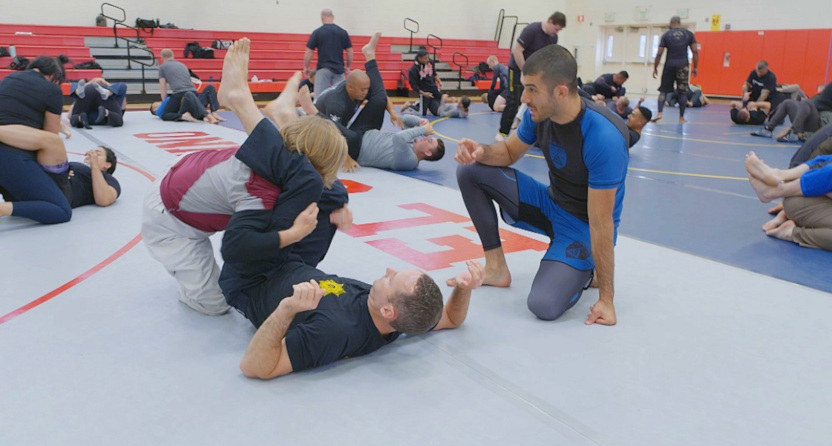 For the past few years, Rener Gracie of the famed Gracie family has been advocating for instructing police officers in Brazilian jiu jitsu, saying that improving their unarmed combat skills could not only keep them safer but also lead to better outcomes than using guns or Tasers. He’s found some success with that, getting his Gracie University curriculum approved by The Commission on Peace Officer Standards and Training (POST) in California last December as well as working with individual departments across the country. One of those departments is in Marietta, Georgia, and it’s that department that’s the focus of a segment on the latest Real Sports with Bryant Gumbel (premiering Tuesday night on HBO at 11 p.m. ET/PT, following Hard Knocks). Here’s a clip from that segment, ” Police Jiu Jitsu Training,” which has correspondent David Scott reporting and is produced by Maggie Burbank:

Gracie’s early comments there are notable, but what’s perhaps more notable still is the outcome-focused discussion from Major Jake King of the Marietta Police. King says this training, which his department has been doing since 2019, has led to a 48 percent decline in officers being injured and a 53 percent reduction in injuries to suspects. He also says “If you scuffled, resisted arrest, you were 200 percent more likely be to injured by a non-jiu jitsu officer than somebody that had been through the mandatory program or was a practitioner of jiu jitsu. And then I went through workers’ comp claims, and we saved almost $70,000 in the first year, significantly less than what the program cost us to run.”

Of course, one program in one police department isn’t necessarily a universal answer, and the data sample here is limited. And there also might be other factors that impacted those statistics. But it’s certainly interesting to see Real Sports looking at this, and the full segment here should be worth a watch. And this may become important nationally; as mentioned, Gracie’s course received California certification late last year, and he’s pushing to try and improve police jiu-jitsu training across the country through partnerships with local academies. We’ll see if his particular methods and/or other styles of unarmed combat training become more common in police training going forward.

[HBO on YouTube; Real Sports with Bryant Gumbel airs at 11 p.m. ET/PT Tuesday night on HBO, and will be available on HBO Max and on-demand afterwards]