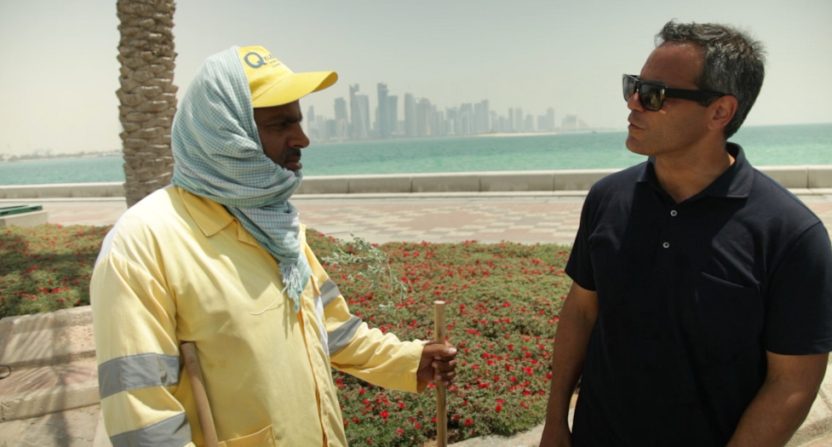 There are a lot of different controversies around the 2022 FIFA World Cup in Qatar, which can make it hard to see the whole impact of an individual one. The suppression of LGBT+ statements (and media supporting them) is certainly notable, as are the excavations of the bribes it took for Qatar to land this World Cup in the first place and the espionage they allegedly financed to make sure they kept it, as are the discussions of the spyware apps they’ve required fans to download that don’t even always work. And even the beer ban is notable as evidence of the country completely going back on its pre-event international pledges.

Amidst all that, there’s some merit into fully diving into one particular controversy. And that’s especially true for the one that’s maybe the most significant. That would be the conditions for, and deaths of many of, the migrant workers who built the stadiums audiences around the world are now looking at.

Where to turn for coverage of the actual migrant worker issues in Qatar? Well, it’s certainly not going to come from U.S. English-language World Cup broadcaster Fox, where executive producer David Neal proudly proclaimed before the event that they didn’t care about off-pitch problems. Neal told Jonathan Tannenwald of The Philadelphia Inquirer “We believe that viewers come to Fox Sports during the World Cup to see the greatest sports event in the world. They don’t come to us expecting us to be [HBO’s] Real Sports with Bryant Gumbel, or [ESPN’s] E: 60. That’s not who we pretend to be, and I don’t think that’s what the viewer expectation is. …If it’s ancillary to the tournament, if it has to do with the construction of the venues or what have you, we’re going to leave that to other entities to cover.”

That’s perhaps to be expected from Fox. Their main notable off-pitch coverage in Russia four years ago was airing a bizarre segment promoting “formidable figure” Josef Stalin’s dacha, which they eventually had to apologize for. And they certainly have not made much of a mark in investigative sports journalism in general. And it makes sense that they’re not going to be overly critical of Qatar when they have Qatar Airways as a major sponsor (whose effect on how much in-country coverage Fox is doing has been debated), and when a large number of their pre-game/post-game/halftime ads are literally just promotions of Qatar. Their extremely limited coverage of actual issues in Qatar has been noted, including in comparison to other international rightsholders like the BBC.

But it is definitely notable that the two specific U.S. competing sports broadcasters Neal mentioned, ESPN and HBO, have both produced excellent pieces on what’s actually going on in Qatar. And they’ve done that despite the handicap of not having event rights, and despite the country’s many, many attempts to crack down on truthful and accurate foreign journalism. ESPN did so with an excellent E:60 feature, “Qatar’s World Cup,” that’s now available to stream on ESPN+. And HBO’s Real Sports with Bryant Gumbel did that in their monthly episode. They have a 12-minute update of a 2014 story they did on migrant workers in Qatar, which received notable recognition at the time. The update, again helmed by correspondent David Scott (seen above talking to one migrant worker) premieres Tuesday at 10 p.m. ET/PT on HBO and will also be available on HBO Max. Here’s a preview clip:

That clip shows off some of the reporting Real Sports did in 2015 on the conditions for migrant workers, which included sleeping eight to a room on bedbug-infested mattresses, having no showers, bathing with buckets, and sharing two small kitchens “infested with mosquitoes, cockroaches, bugs, and flies” amongst 600 men. It also includes comments from Husain Abdulla, the executive director and founder of Americans for Democracy and Human Rights in Bahrain, who Real Sports spoke to both back then and now. In the full segment, Abdulla says this “is modern-day slavery.” One comment from Abdulla in that clip stands out on how easy this would be for Qatar to actually fix with all their money:

“They can fix this in one day if they want to. The will is not there. They think those people are brought there to serve them, and that’s that. They’re working machines, no more than working machines.”

The full segment also includes footage of Nepalese family members greeting coffins of migrant workers on their return (which was shown in 2015), and a confrontational interview (also from 2015) between Scott and a Qatari sheikh overseeing some of the construction, who told Scott to go investigate conditions himself. When Scott revealed he had, that led to quite the exchange:

That then wraps up with a “With that, we were told the interview was over.” But the current segment continues on with some very notable updates, including an interview with Norwegian reporter Halvor Ekeland, arrested in Qatar in 2021 after an attempt to report on conditions in the country. Ekeland notes to Scott that the country’s vowed reforms have not seemed to lead to actual change.

“On paper, the reforms are there. …Yes, there are new laws, but the promises are not met. I was promised press freedom, I didn’t get it. The workers there are promised salaries, they’re promised not to work in the heat, and I guess they don’t get what’s promised to them either.”

And the current segment closes with a very poignant note from Abdulla.

“When you’re watching that World Cup in Qatar, just imagine how many men are buried in those grounds.”

This is a powerful segment for Real Sports to update. Yes, some of what’s here was already seen by those who watched their first segment on this in 2014, but there are also many new people interested in the actual story of the World Cup in Qatar. And the updates here are significant enough for even those familiar with this story to watch it again. It’s good to see that Real Sports, like ESPN, picked up the gauntlet laid down by Fox and Neal of covering the many incredibly significant issues around this World Cup that don’t involve the on-pitch action.

November’s episode of Real Sports with Bryant Gumbel premieres on HBO at 10 p.m. ET/PT Tuesday. It will also be available on HBO Max. In addition to this particular updated segment on Qatar (produced by Josh Fine and Stephen Lorenzo), it also features host Gumbel talking with Men in Blazers hosts Roger Bennett and Michael Davies about issues in Qatar (Bennett has been part of a different notable podcast on Qatari World Cup issues), plus segments on skier Mikaela Shiffrin and athlete-turned-booster Mat Ishbia.