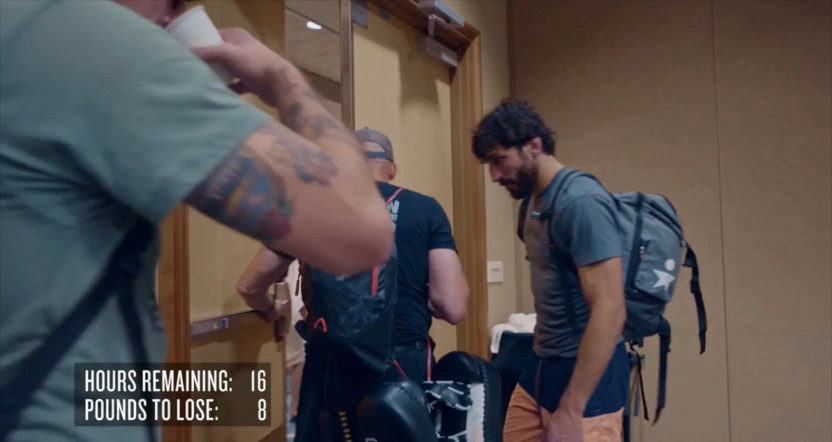 HBO’s Real Sports with Bryant Gumbel has often examined some tough issues, with this year alone including in-depth reports on COVID-19 testing and pro sports finances amidst the pandemic and racial injustice protests. Their newest episode, debuting Tuesday night (10 p.m. ET/PT), has a fascinating segment on the dangers of extreme weight cutting in combat sports (something that’s been drawing some attention lately, including with FloSports’ Bad Cut). And it’s both one of the hardest sports segments to watch in a while and one that’s well worth checking out.

The “Weight Cutting” segment features correspondent David Scott exploring weight cutting issues from a variety of perspectives, including following Ramsey Nijem through a tortuous weight cut (involving puking, rubber sweat-boosting suits, salt baths and more) to try and lose 13 pounds in 17 hours ahead of a Professional Fighters’ League event last fall. And Nijem has some remarkable quotes there looking back at his ordeal.

But perhaps the quotes that stand out the most don’t come from the fighters Scott talks with. Instead, those are from Dr. Anthony Alessi, the director of UConn’s NeuroSport program and a consultant for combat sports regulation commissions in Connecticut.

Alessi says “It’s not uncommon to be at a weigh-in and find out that a fighter is in renal failure. We’ve had to send them to the emergency room to jump-start their kidneys. Kidney failure. If they were to continue as they were, their kidneys would die.” He then adds “This has become bizarre. People are dying. When are we going to stop it?”

And the segment then goes on to provide footage of athletes experiencing seizures during weight cuts, plus stories of those who did die (including Leandro “Feijao” Souza in Brazil in 2013 and Yang Jian Bing in the Philippines in 2015). It also has an interview with Uriah Hall, who passed out ahead of a weigh-in and was rushed to hospital for kidney failure treatment ahead of a UFC event in 2018. Here’s some of the conversation between Hall and Scott, starting with Hall telling Scott that a doctor told him he would have died if he had gone on to fight the next day as he’d planned.

Hall: “He told me I would have died. If I had to put my body through that stress, it wouldn’t have recovered.”

Scott: “You damn near died for this sport.”

Scott: “You okay with that?”

The entire segment is worth a watch, even though it’s quite uncomfortable at times, and it illustrates just how hard these cuts can be for many fighters. In many cases, they’re not losing fat. They’re just pulling water out of their bodies to make weight, causing potential health issues along the way, and then trying to rehydrate ahead of their fights. And that’s a hard and painful process.

And Scott says in there that there aren’t even great rewards for many, stating that “Because virtually all MMA fighters cut weight, none wind up with an advantage.” Nijem tells him “If you want to be competitive, you don’t have a choice. And it sucks,” and he adds that extreme weight cutting can even lead to poor in-ring performance, saying that it led to one knockout he suffered. “If you cut too much weight, your chin goes. You get hit one time and you just go unconscious. …Literally one punch put me to sleep.”

Perhaps the big question left by this segment is what can be done to actually improve matters. Scott does note that MMA faces perhaps more extreme weight cuts than boxing thanks to a smaller number of weight classes, so perhaps expanding the classes might help and might help more athletes fight at something closer to a healthy weight for them. And the UFC in particular does claim that they’re trying to promote weight cutting in as healthy a way as possible through their Performance Center, but an interview with filmmaker Landon Dyksterhouse about his attempts to document a weight cut that turned disastrous for Nicco Montaño in 2018 doesn’t exactly instill a lot of confidence in how the UFC is handling this.

In the end, Nijem’s documented weight cut winds up somewhat working out for him, but only thanks to some last-minute desperate measures. Even with those, though, no one in attendance seems flummoxed or surprised. And Scott asks him about it seeming normal to go to the lengths he did, and he responds “It is. That’s what’s scary.” And that seems to be the case for quite a lot of MMA fighters, and there doesn’t seem to be much of a movement inside MMA organizations to change it. But at the very least, it’s useful for Real Sports to show just how rough some of these cuts are, and to illustrate to a wider audience some of what’s going on in the days before big MMA fights.

“Weight Cutting” is produced by Jake Rosenwasser. It will air on the latest episode of Real Sports, debuting Tuesday, Sept. 22 at 10 p.m. ET/PT on HBO and also available to stream on HBO Max. That episode also includes Bryant Gumbel talking with Jon Dorenbos about the NFL, his post-career work as a magician, and his decision to confront his father, plus Bernie Goldberg exploring the debate on transgender girls and women competing in scholastic sports.