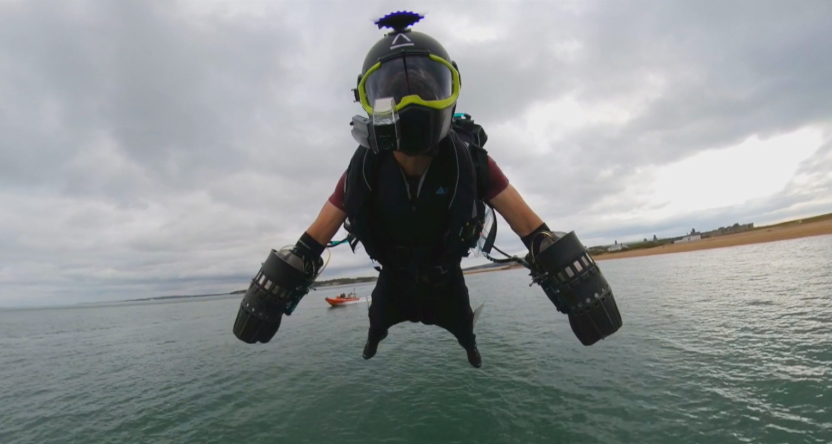 The idea of personal jetpacks has often been discussed in Hollywood, from 1991’s The Rocketeer through 2008’s Iron Man and the many subsequent Marvel Cinematic Universe movies involving Tony Stark. Some level of jetpack technology does currently exist beyond the silver screen, however,  and some notable figures involved with it cite an even earlier inspiration, Bill Suitor. Suitor has more than 1,000 jetpack flights to his credit, from 1965 James Bond movie Thunderball through the opening ceremonies of the 1984 Summer Olympics in Los Angeles. HBO Real Sports with Bryant Gumbel correspondent Jon Frankel talked to current jetpack figures Richard Browning and David Mayman for a “Rocket Men” segment (premiering Tuesday night at 11 p.m. ET/PT on HBO, also available on HBO Max), and one of the most notable parts in there is Mayman’s discussion of talking to Suitor before a 2015 flight around the Statue of Liberty, and then his remarks after that flight happened:

“To me, it was that it worked. It wasn’t just chaos and science fiction.”

And that’s a really interesting part of this whole segment. As Thunderball and further Suitor tests from that era show, jetpack flight has long been possible, but usually only for very short durations and demonstrations. What’s notable about this segment is how it shows potential actual, practicable applications of the technology at its current state. One of those comes from Browning, who did a recent demonstration in the United Kingdom around hiker rescues, reaching supposed in-trouble hikers in three and a half minutes versus the one hour, 20 minutes it would take to walk there from the base of the trail. Browing is quite honest about the level of the technology at present, responding to Frankel’s line of “To some, this is going to look like Hollywood’s Iron Man” with “It’s not quite Iron Man-level, but it’s getting there,” but he’s also fully aware of how remarkable this can be, saying the experience of flying “is awesome, it is pretty euphoric.”

Browning is an interesting figure for HBO to talk to here, as he has some notable family history with this. His father, Michael, was an inventor who dabbled in this area as well as many others. But Michael took his own life in 1994. And that leads to one particularly poignant line, where Browning says he wishes his father could see what he’s done.

“It’s probably my biggest regret in life. If he could just come back for five minutes, I think he’d be pretty amazed by what we’ve done. He’d definitely want to go, and then ask me how it worked.”

As for Mayman, he’s got some interesting notes of his own, including on how hard it was to get this technology to work for any length of time. At one point, he says “Nobody had really done this before, so this was literally failure after failure after failure.” But he later tells Frankel his technology is currently at a point where it can deliver performance of 120-plus miles per hour for 10 minutes up to 10,000 feet, saying “It’s an aircraft. It really is an aircraft.” And he thinks it’s particularly notable how people react to it:

“If you watch somebody take off, the look on their face as you go, it’s usually a huge smile. It’s the ultimate type of freedom.”

This episode of Real Sports with Bryant Gumbel will premiere on HBO at 11 p.m. ET/PT on Tuesday, and will also be available on HBO Max. Beyond the ‘Rocket Men’ segment (produced by Chapman Downes), it will also feature Gumbel’s interview with Big Ten commissioner Kevin Warren (produced by Maggie Burbank), Mary Carillo’s piece on the Senior Games (produced by Katie Melone), and an Andrea Kremer update on Hall of Fame boxing champion and trainer Ann Wolfe (produced by Downes, Nick Dolin, and Evan Burgos).