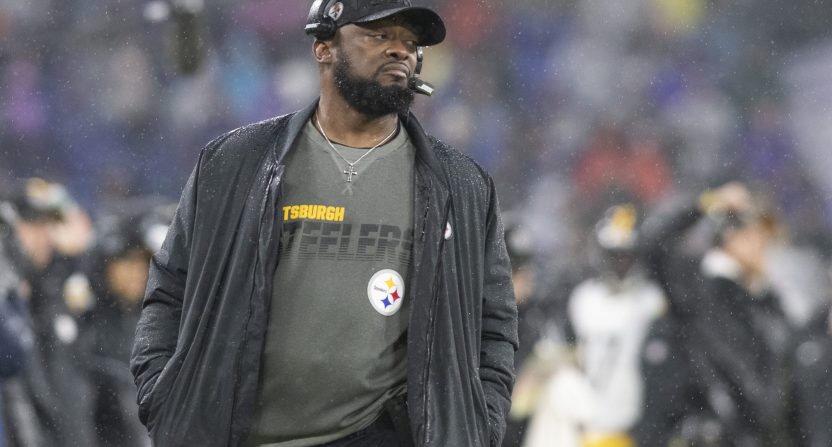 With another NFL regular season in the books, we now know which teams can be forced to appear on HBO’s Hard Knocks (barring a surprise firing this week).

As a reminder, teams can be forced to appear on Hard Knocks if all three of the following criteria are met.

Anyway, unless a head coach is shockingly canned this week, the five (updated to reflect Doug Marrone’s shocking non-firing) teams that can be forced to appear on Hard Knocks this year are the Arizona Cardinals, the Denver Broncos, the Detroit Lions, the Jacksonville Jaguars, and the Pittsburgh Steelers. None of these five teams were featured on Hard Knocks prior to the current decade, and there seems to be one definite standout of the bunch this year.

Why it could be good: There’s an easy story to focus on here with the return of Matthew Stafford, who missed half of this season and saw the Lions completely collapse (0-8) without him. Detroit also has a couple of other younger players, Kenny Golladay and Kerryon Johnson, that could provide some entertainment. The Lions also have the third overall pick in April’s NFL Draft, and unless they draft an offensive lineman, there could be plenty of interesting storylines sprouting out of that pick.

Why it could be bad: Well, they’re not good. Matt Patricia doesn’t seem like a guy that will provide many interesting moments on camera. They play in a brutal division and even sniffing .500 (let alone the playoffs) in 2020 would be considered a success. I just can’t see many people getting excited over a series focusing on…the Lions.

Why it could be good: Minshew mania! If Nick Foles and Leonard Fournette are still around, they could provide a substantial amount of drama as well.

Why it could be bad: There are only so many times one can hear someone yell “DUUUUUVAL!” without losing their mind. The Jags have also spent most of their history ranging between flat out bad and thoroughly mediocre, and that 2017 playoff run is the one year in the last nine where Jacksonville didn’t have double digit losses.

Why it could be good: Drew Lock’s finish to the season finally gives the Broncos something to dream on at quarterback following Peyton Manning’s retirement. John Elway runs the show in Denver, and the fact that he’s one of the league’s most iconic players wouldn’t hurt the appeal of a Broncos-centric Hard Knocks. Von Miller should still be around, and is one of the league’s most recognizable players. The Broncos’ strong finish to the year with Lock at the helm (4-1 in December, including two wins in the division and a road win at Houston) could spur playoff talk in 2020, and there’s nothing wrong with a little hope in your summer showcase of a team.

Why it could be bad: Outside of Lock, Miller, and Phillip Lindsay’s hair, where’s the star appeal on this team? I also don’t know what to expect out of Vic Fangio – he doesn’t exactly seem like a quote machine.

Why it could be good: The Cardinals have a second-year coach with an exciting offense, and an exciting second-year quarterback. That combination alone makes this a tantalizing pick, but the Cardinals have other interesting stories to follow, too, including David Johnson’s return from injury and Larry Fitzgerald’s potential retirement. Throw in a top ten pick in April, a budding young star in Christian Kirk, and a pair of defensive standouts in Chandler Jones and Patrick Peterson, and it’s easy to see why the Cardinals can look so good to HBO this summer.

Why it could be bad: I say this with all due respect to the Cardinals and their fans: we’re talking about the Arizona Cardinals here. Phoenix is not the best sports market in the country. The Cardinals have largely been irrelevant across their history, outside of the glory days of Kurt Warner’s last two years, Fitzgerald, and Carson Palmer’s first three years in the desert. Besides, Amazon put together an All or Nothing series on the Cardinals back in 2016 – do we really need another look at the team four years later?

Why it could be good: As much as it pains me to admit this, the Steelers are one of the NFL’s most history-laden franchises with a rabid fanbase. The return of Ben Roethlisberger from an elbow injury is a storyline that will not only be followed in Pittsburgh, but across the entire league. Mike Tomlin will be facing pressure after missing the playoffs in back to back years (especially given the otherworldly season across the division in Baltimore) and how he and the rest of the franchise respond will be worth keeping an eye on. Running back James Conner is also a likable guy with a story that viewers can get behind.

Why it could be bad: No Le’Veon Bell, no Antonio Brown, no drama. That isn’t necessarily a bad thing for the Steelers as an organization, but for an outsider looking in, those are two players whose situations we could have gotten invested in over the last couple of years.