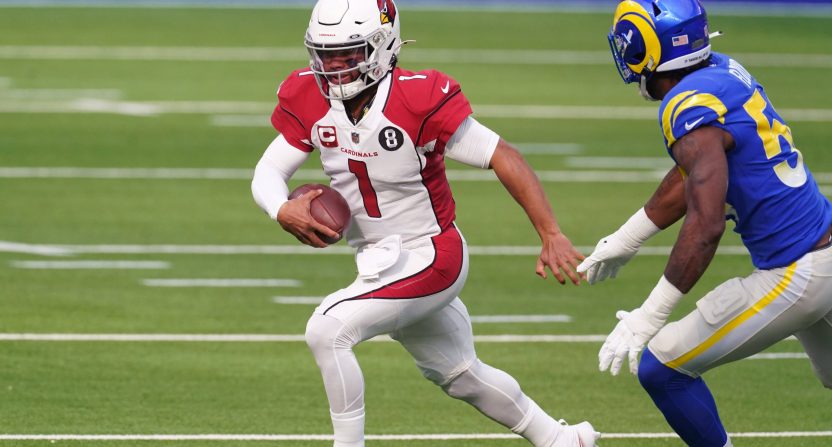 We’re a bit later than usual with this, but with the 2020 NFL season wrapped and all head coach openings filled, it’s time to look ahead to the summer, and specifically, HBO’s Hard Knocks. Each year, the docuseries follows a team during training camp and gives viewers behind the scenes insight.

The quest for teams to volunteer has become more difficult over the years, often forcing the NFL and HBO to force a team into being featured – as long as they fit a specific set of criteria. If you’re new here, a team must check all three of these boxes in order to not be forced into appearing.

A year ago, five teams could be forced onto the show. Two of those five (the Broncos and Cardinals) return, while three (the Lions and Jaguars have new coaches, while the Steelers made the playoffs) are bounced from the list. This year, five teams are eligible once again – the aforementioned Broncos and Cardinals, along with the Cowboys, Giants, and Panthers. None of these options are ideal, and it needs to be said that it’s not a guarantee one of them will be chosen. Last year, the NFL went with the Rams and Chargers, with neither team being eligible to be forced into the show.

So, which team would be the best choice? Here are our rankings.

Why it could be good: Maybe they take an interesting player ninth overall in the NFL Draft? Or trade for Deshaun Watson? If Von Miller comes back for the 2021 season, his return from an ankle injury and the ongoing contract uncertainty could be compelling storylines.

Why it could be bad: With all due respect to the Broncos and their fans…this doesn’t seem like a very interesting team from the outside looking in. They haven’t made the playoffs since Peyton Manning retired. Miller, the team’s most recognizable player, might be on his way out the door. I really don’t have much else to say about Denver. I don’t think the NFL would love to have them on Hard Knocks (again, unless Watson or a top QB in the Draft ends up there).

Why it could be good: A lot of the things I said about the Broncos are true for the Panthers. They’re also in the mix for Watson and have a top ten pick, and incumbent quarterback Teddy Bridgewater doesn’t seem like a cornerstone guy for a series like this. Also like the Broncos, Carolina has the built-in storyline of a star player returning from injury: running back Christian McCaffrey.

Why it could be bad: They’re just kind of there. McCaffrey is a fantastic player, but he seems somewhat dry to me. The Panthers don’t have a player to fill that “polarizing star” role like Cam Newton did for pretty much his entire career, and they no longer have a player like Steve Smith Sr, a legendary shit talker that could back it up on the field.

Why it could be good: I don’t want to buy in to the east coast bias talking point, but it’s New York. The Giants will be a circus in 2021, especially after a four-game winning streak late in 2020 pushed them into the NFC East race. I think all of the absurd narratives about Daniel Jones would create interesting TV, as would Saquon Barkley’s return.

Why it could be bad: Outside of Jones and Barkley, there is a whole lot of anonymity to this Giants roster. I’d also be wary that head coach Joe Judge, coming from the Bill Belichick coaching tree, could clamp down on in-depth coverage, much like we saw with Jon Gruden and the Raiders in 2019.

Why it could be good: They’re the Dallas Cowboys, America’s Team, blah blah blah. Having the Cowboys on Hard Knocks certainly would be the best thing for viewership. Dallas could also have a very interesting situation pop up at quarterback (will Dak Prescott return, and if so, how will he look after his ankle injury? Could they trade for Russell Wilson? Would they take a QB tenth overall?), which would be compelling TV. Also, Jerry Jones loves attention, Ezekiel Elliott can’t seem to avoid being a lightning rod for controversy, and Mike McCarthy reportedly smashed watermelons as a motivational tool last season.

Why it could be bad: The possibility of Dallas having someone other than Prescott, Wilson, or one of the top QBs in the Draft as their QB1 at the start of training camp is a possibility, and while that would please all those fans out there who don’t like the team, it would suck a lot of potential starpower and drama out of Hard Knocks.

Why it could be good: Kyler Murray, DeAndre Hopkins, Kliff Kingsbury, and a roster that fell just short of making the playoffs last season. Yes, the Cardinals struggled late in the year, losing five of their last seven to fall out of the race, but they’re still one of the most exciting teams in the league. The NFL has less of a problem with building up stars on non-marquee teams than other league (MLB, take a lesson), but featuring Murray and Hopkins on Hard Knocks would be a fantastic way to hype up one of the best QB/receiver duos in the NFL. And while the Cardinals were featured on Amazon’s All or Nothing, it was long enough ago (2015) that nearly all of the key people involved have since moved on.

Why it could be bad: So, despite the on-field starpower, I don’t have a good feel if there’s enough off-field appeal for the Cardinals. Despite the franchise’s age, this is one of the least successful teams in NFL history, and they’re not a national draw (especially when compared to the Cowboys and Giants, both discussed earlier). For football diehards, this is absolutely the best team to feature on Hard Knocks. But for the casual fan, it might not be a natural draw.