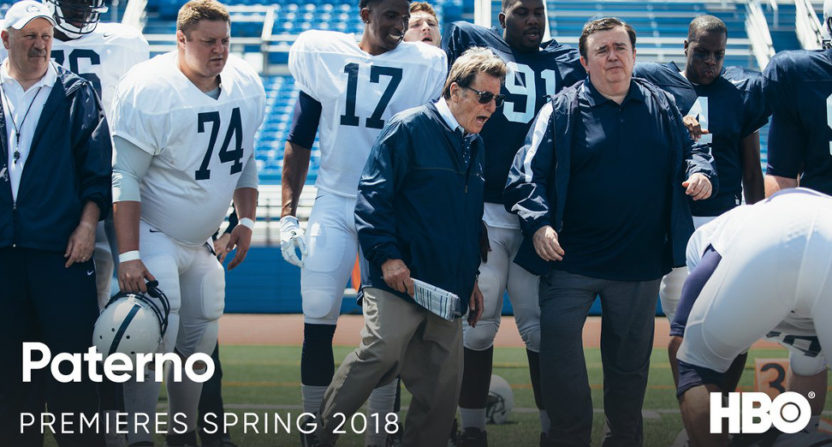 Six years ago, discussion began around a Joe Paterno film starring Al Pacino. That first project, initially based off Joe Posnanski’s book Paterno and envisioned as a biopic spanning Paterno’s whole life, fell apart not long afterwards, but the idea of Pacino as Paterno came back last June with the announcement that Barry Levinson would direct the film for HBO. Filming took place last summer, and HBO tweeted Thursday that the movie is coming this spring:

What’s the movie actually going to look like? Well, the official logline released last summer made it seem like the focus had shifted from an overall biopic to something focused on the Jerry Sandusky scandal and its aftermath:

“After becoming the winningest coach in college football history, Joe Paterno is embroiled in Penn State’s Jerry Sandusky sexual abuse scandal, challenging his legacy and forcing him to face questions of institutional failure on behalf of the victims.”

Levinson has directed a lot of big movies over the years, including Good Morning Vietnam, Rain Man (where he won the Oscar for Best Director), and The Natural. Recently, he directed the 2015 Bill Murray film Rock The Kasbah and the 2017 HBO movie Wizard of Lies (with Robert De Niro as Bernie Madoff). He also did the 2009 30 for 30 installment The Band That Wouldn’t Die for ESPN, and he’s worked with Pacino multiple times before, including on HBO biopics about Jack Kevorkian and Phil Spector.

As per IMDB (which still has this titled as Happy Valley), the film has plenty of other notable people attached. It includes Riley Keough (Logan Lucky, It Comes At Night) as reporter Sara Ganim, Annie Parisse (Friends From College, Vinyl) as Paterno’s daughter Mary Kay, and Steve Coulter (who worked with Pacino in Hangman and Wizard of Lies) as Penn State athletic director Tim Curley. We’ll see when this actually releases and how it turns out.