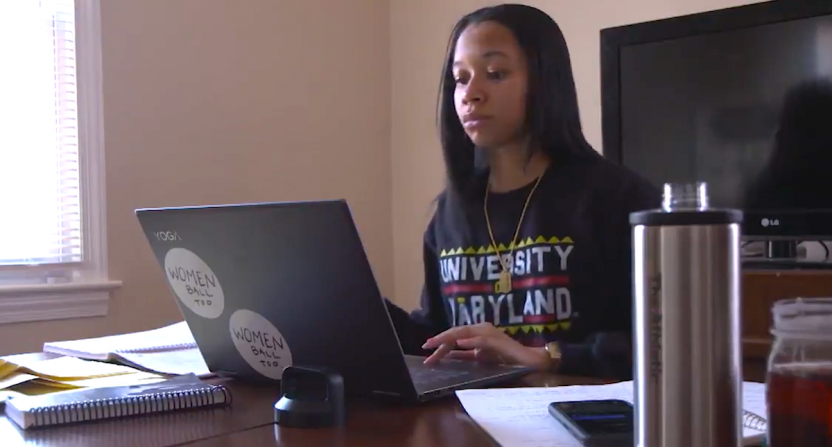 Last year, the Washington Post ran an explosive story about the culture of sexual harassment prevalent in the Washington Football Team’s workplace. The report cited 15 female former employees who alleged being sexually harassed and verbally abused by team employees and executives and ultimately resulted in the departures of broadcaster Larry Michael and pro personnel director Alex Santos.

Additionally, two female reporters came forward in the report to say they had also been subject to demeaning treatment by Santos. Both The Athletic’s Rhiannon Walker and Nora Prinicotti of The Ringer put their names on the allegations at the time, and each appeared on the latest Real Sports with Bryant Gumbel (broadcast May 25) to discuss their experiences with Andrea Kremer on a feature about female sports reporters continuing to be harassed while doing their jobs.

In the Post‘s report, Walker explained that she’d been propositioned — and later pinched — by Santos at an Indianapolis steakhouse during the 2019 NFL Combine. (She elaborated on the account in a piece for The Athletic.) Princiotti endured similar treatment from Santos in 2017 while covering the team for the Washington Times. Both recounted those events on-camera with Kremer.

Forty years after they won equal access to locker rooms, female sports reporters continue to face serious obstacles in doing their jobs, from sexual objectification to abuse. @InstantRHIplay and @KleinschmidtJD sit down with @Andrea_Kremer in tonight's episode on @HBOMax. pic.twitter.com/ibLGxmjWV5

Walker said she was furious and embarrassed by the incident, which occurred in front of team staffers. But she didn’t want to react in such a way as to alienate Santos and have her access to Washington officials cut off in retaliation.

“My knee-jerk reaction was just make sure that he doesn’t have such a bad taste in his mouth that you’re not completely screwed over in this situation,” said Walker.

Andrea and the @RealSportsHBO team did a really good job with this. It’s, uh, not my favorite story to tell, but it was in excellent hands ? https://t.co/2tYHYAVlvW

Also appearing in Kremer’s report was NBC Sports Bay Area reporter Jessica Kleinschmidt, who recalled being harassed by a communications manager with a minor-league team. Yet like Walker, she initially dealt with the misconduct (which included being sent sexually explicit photos) so that she could continue doing her job.

“I was freelancing so if I didn’t write an article, I wasn’t going to be paid,” Kleinschmidt said. “So if I got anything turned down, I was screwed.”

Thankful for all the kind words and support today. We still have a lot of work to do, but we’re getting there. ?

Anyone who might question why more female reporters weren’t interviewed on camera was addressed by Kremer in the report. Kremer said she and producers talked to two dozen women for the story, but most of them didn’t want to go on record for fear that revealing allegations wouldn’t be believed, might be ignored, and cause damage to their careers. So such misconduct is effectively allowed to continue.

You can watch replays of latest episode of Real Sports with Bryant Gumbel on the HBO catalog of channels in addition to HBO Max.