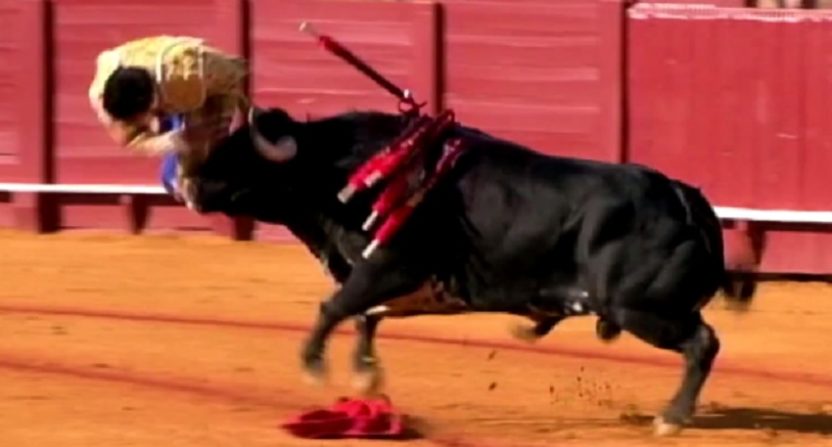 Bullfighting may be “the original extreme sport,” as HBO’s Jon Frankel calls it on the latest episode of Real Sports. But this particular endeavor seems as if it belongs in a different time, portraying a noble or romantic notion of an era that no longer exists. That may be best illustrated by the most famous names who fell in love with bullfighting. Ernest Hemingway and Orson Welles are legendary figures in literature and filmmaking, respectively, but don’t resonate nearly as much with modern culture that feels the spectacle is outdated and inhumane.

Nonetheless, bullfighting is still a major event in Spain, particularly in regions such as Seville, where those who stand in the ring with the charging beasts ready to gore them are still lauded as heroic figures. It’s still viewed as the ultimate test of courage. But Frankel also shows the growing contingent that protests the existence of bullfighting and makes it far more difficult for the sport to continue any form of prosperity or success. For instance, bullfighting is now banned in Barcelona.

Yet as Real Sports details, it doesn’t often seem like a fair fight between man and bull. Before the matador enters the ring, picaderos jab the animal from horseback with lances. Then banderilleros throw sharp darts with colorful tails into the bull’s back, aiming at the shoulders which are their weakest point. That softens the bull up for the matador to step in, seemingly already at an advantage. Wrestling fans might liken it to WWE’s Money in the Bank winner cashing in a contract to face the champion after he’s already been through a grueling match.

Here is a trailer for the segment, titled “Raging Bulls,” which airs Tuesday night at 10 p.m. ET on HBO:

Despite the bull already being weakened, the matadors are still in considerable peril. Though much of the spectacle appears to be a dance, with the matador eluding the charging bull and using a cape to add flourish and color to the action, that bull is still plenty pissed off and ready to kill something with his horns. The Real Sports report shows several examples of matadors being gored by their adversaries. Some of that footage is graphic. One matador is shown on the verge of death after being trampled and gored.

Cayetano Ordonez is one of the matadors profiled in Frankel’s report. He has matinee idol looks, treats bullfighting like an art form and noble pursuit, and the sport runs through generations of his family. His grandfather was followed by Hemingway. Welles had his ashes buried on their property. Looking at Ordonez, you might see the appeal of bullfighting, as brutal as it can be. The other side of the coin is Juan Padilla, who has been gored so many times that you wonder how he could possibly still want to step into the ring with a bull. One particular confrontation cost him his left eye, and HBO shows that goring in all of its grisly detail.

Upon initial viewing, this seems like it could be a Funny Or Die sketch or the latest sports mockumentary made by Andy Samberg. The flamboyant outfits, the adoration of the crowds, the weakening of the bull before its ultimate clash, and the injuries suffered by many matadors all seem like rich material for comedy. But then Real Sports shows just how serious and dangerous bullfighting can be, and it’s not funny anymore.