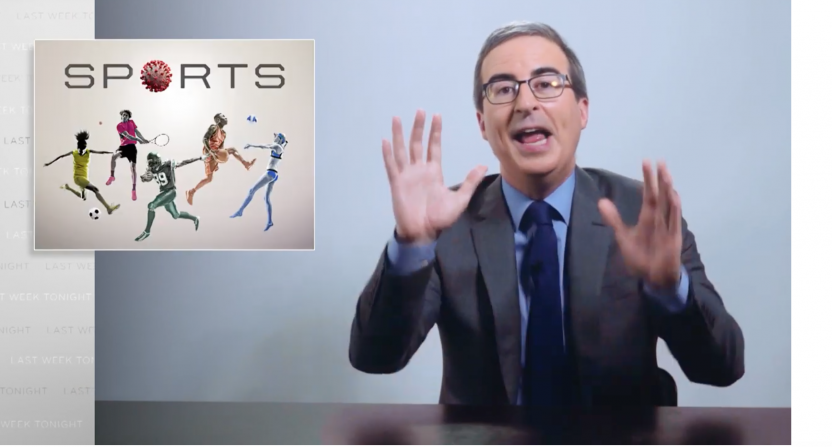 It’s been approximately 10 weeks since the sports world began its COVID-19 shutdown. The NBA suspended the remainder of its season once the Utah Jazz’s Rudy Gobert tested positive for the novel coronavirus and virtually every organized professional and amateur sport followed suit.

Nearly three months into the sports shutdown and the nation self-quarantining under stay-at-home orders, the question now becomes whether or not businesses can begin opening back up to restart the economy and restore some sense of normalcy to society.

And sports will play a big role in that. Will Major League Baseball play its 2020 season? Will the NBA and NHL return to finish their campaigns? Two months from now, the NFL and college football will face the same questions.

On HBO’s Last Week Tonight, John Oliver devoted the main feature of Sunday’s show to, as he put it, “what sports have become in the age of coronavirus and what a path back for them might look like.”

Though you might expect Oliver to immediately get his knives out, he begins by praising the many athletes and organizations who have contributed to COVID-19 relief efforts, also making efforts to pay those who have been out of work with no live sporting events being held.

Additionally, teams have engaged fans with videos showing mascots entertaining themselves at home (the Philadelphia Flyers’ Gritty is a standout here), while athletes have shown how they’re maintaining their training with home versions of workouts.

But then there’s the reality sports TV networks have faced with no live sports. ESPN airing NBA and MLB stars playing video games was an easy target for ridicule, as was the SportsCenter Twitter account showing footage from a Russian slapping contest.

However, Oliver saved his venom for those who have pushed the boundaries of health and safety in the name of making money, such as the WWE’s Vince McMahon and UFC’s Dana White. (Fight Island!) Oklahoma State football coach Mike Gundy is also a punching bag for his comments about his players returning to practice, remarks for which he eventually apologized.

The segment eventually runs into the same dilemma many in sports media and fandom have been discussing over the past few weeks. Can sports come back safely?

Is it at all realistic for games to be played, even without fans in attendance, with all of the safety measures that would be required? How many people are involved in running a MLB game? Are players, coaches, and staffers willing to be sequestered from their families? Can they all be tested properly? What would quarantine procedures be, especially if anyone tests positive for COVID-19?

Oliver doesn’t provide any answers, but how could he? No one knows if any proposed solutions are truly viable.

But the Last Week Tonight segment distills and explains the quandary sports currently faces for an audience that may not be following these developments every day. And Oliver ultimately captures why sports are important to recovery from this pandemic, because they provide an escape and create a sense of fun. Even if it means watching marble races online.