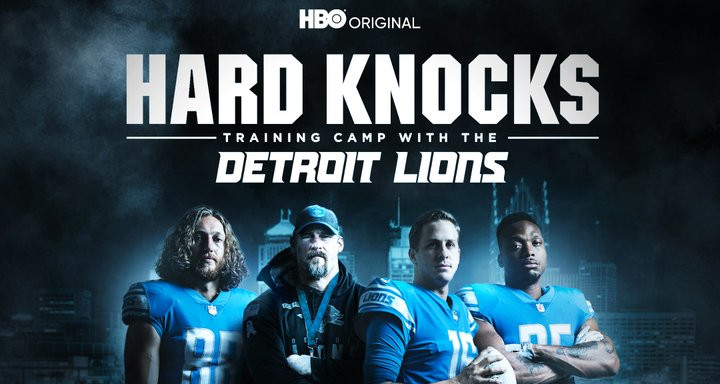 There were only three possibilities for teams that could be forced onto HBO/NFL Films’ Hard Knocks this summer: the Detroit Lions, Carolina Panthers, and New York Jets. That’s due to the rules that offer opt-outs for teams who have new head coaches, have made the playoffs in the last two seasons, or have been on the show in the past 10 years. Now, the choice has been made, with the Lions announcing Monday morning that they’ll be on the show.

Here’s more from the team’s release:

HBO Sports and NFL Films are partnering with the Detroit Lions for an unfiltered all-access look at what it takes to make it in the National Football League with HARD KNOCKS: TRAINING CAMP WITH THE DETROIT LIONS. The five-episode season debuts Tuesday, August 9 (10:00-11:00 p.m. ET) with additional hour-long episodes debuting subsequent Tuesdays at the same time, culminating in the September 6 season finale. The first sports-based reality series, and one of the fastest-turnaround programs on TV, will debut on HBO and be available to stream on HBO Max.

…”We are excited about the opportunity to showcase the City of Detroit and the amazing culture we are building at the Lions,” said Detroit Lions Team President and CEO, Rod Wood. “HBO Sports and NFL Films are the best of the best and we know they will be excellent partners in sharing our story with football fans around the world.”

Camera crews will head to the Lions’ training camp in Allen Park, Michigan in the next few months to begin filming, with the action heating up in August when the cinema verité show focuses on the daily lives and routines of players and coaches. HARD KNOCKS: TRAINING CAMP WITH THE DETROIT LIONS will chronicle head coach Dan Campbell entering his second season leading the team and an intriguing mix of young emerging stars, established veterans, free agent additions and highly regarded rookie hopefuls throughout training camp and the preseason. HARD KNOCKS: TRAINING CAMP WITH THE DETROIT LIONS will be narrated by Liev Schreiber, marking his 16th season with the show.

“As Hard Knocks enters its third decade inside NFL training camps, we are both thrilled and thankful for the opportunity to feature a historic franchise like the Lions,” said NFL Films Vice President and Senior Coordinating Producer, Ken Rodgers. “The city, the culture and the coaching staff in Detroit all have an exciting energy that will make the show must-watch television this summer.”

It’s the Lions’ first time on Hard Knocks, which also would have been true for the Panthers. The Jets were picked for the series in 2010. And there are definitely some interesting stories and star players on these Lions, including Jared Goff, Amon-Ra St. Brown, Penei Sewell, and Frank Ragnow. And coach Dan Campbell (heading into his second season with the team after a 3-13 campaign last year) certainly can provide some good sound bites:

That clip, from the Lions’ official YouTube channel, also may help indicate why this announcement came now. We’ve often seen Hard Knocks announcements in April or May when teams needed some coaxing to sign on (yes, the teams that meet the criteria can’t say no outright, but there are still usually some behind-the-scenes discussions about what they will and won’t allow), and last year’s announcement of the Dallas Cowboys came in July. A March announcement suggests the Lions didn’t fight this too hard, and one reason why may be that they’ve already done a fair bit of behind-the-scenes content themselves, from locker room videos like the one above to their own “Inside The Den” behind-the-scenes series (covering everything from the draft to the preseason to the Senior Bowl). So there’s some familiarity with having cameras around. And as Zack Moran wrote at USA Today‘s Lions Wire last year around that draft video, the transparency shown in the Lions under Campbell and general manager Brad Holmes is significantly different from how the team has operated in the past:

The transparency of the new Detroit Lions regime is night and day from the old regime, where they kept everything close to the chest in hopes of not reviling secrets to other teams. It is a breath of fresh air to see this regime explain their thoughts and feelings towards how they are looking to build this team from essentially what it feels like from the ground up.

We’ll see how this Hard Knocks turns out. But there’s certainly some potential here with this pick.