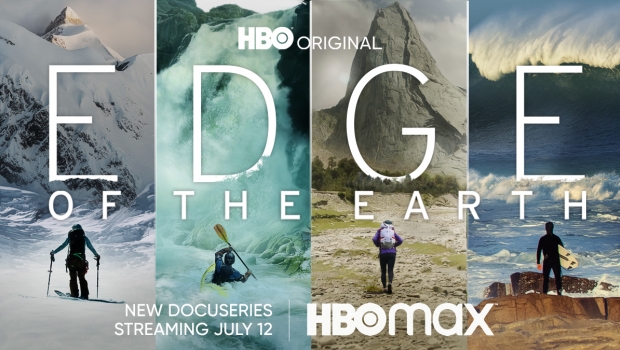 Athletes who push themselves in mesmerizing ways while the rest of us sit from the comfort and safety of the stands or couch will always be fascinating. They dare to achieve things that most of us couldn’t even attempt. It’s one thing to see a professional hit a home run, throw down a slam dunk or score a touchdown. It’s another to see the action-adventure athletes in HBO’s Edge of the Earth.

This is as extreme as extreme sports get. You’re watching snowboarding, skiing, kayaking, free climbing, and big-wave surfing in the most remote corners of the globe. With jaw-dropping moments and beautifully shot visuals, this four-part documentary series (a partnership between HBO and Teton Gravity Research) directed by Steve Jones and Todd Jones is breathtaking. The Joneses bring you up close and personal with scenes that will leave you in awe.

What separates Edge of the Earth from a typical outdoor sports film is the degree of difficulty. These thrill-seekers are pushing the limits of what human beings can achieve by venturing to places that are incredibly hard to get to. Just reaching isolated areas like Glacier Bay National Park in Alaska, Chalupas River in the Llanganates National Park in Ecuador, and Pik Slesova in Kyrgyzstan seems overwhelming.

It’s amazing to watch these athletes battle climate change, border conflicts, droughts, rain storms, snowstorms, avalanches, and the pandemic among other challenges all in pursuit of achieving the impossible. Steve Jones and Todd Jones do a good job of selecting athletes with different stories to tell. Thankfully, Edge of the Earth doesn’t follow a predictable pattern. There are successes, failures, and surprises.

The biggest heroes of this doc series are the people behind the camerawork. There are many shots where you’re left wondering: ‘how did they do that?’ Some appear to be from helicopters, drones, or GoPros. There are shots so intimate that they leave you impressed with the craftsmanship. The attention to detail makes a huge difference as you watch real-life dramas unfold.

Of the three episodes made available to Awful Announcing for review, the first one (“Into the Void”) might be the most compelling. Snowboarders Jeremy Jones and Elena Hight, and skier Griffin Post embark on a quest to conquer Mount Bertha in Glacier Bay National Park. Just to get to the mountain felt like something out of the Odyssey.

You can’t drive to the mountain. Not in Alaska where several parts of the state are accessible only by air or water. There is a process. There is planning. The journey starts with a 25-hour boat ride from Juneau to the edge of the glacier. Next comes a 15-mile hike through frozen terrain to reach the base camp.

Here you see the importance of having good teammates. It’s fun to watch Jones, Hight, and Post work together to overcome obstacles. They are determined but smart about their choices. When they finally reach Mount Bertha, you can see the pure joy on their faces.

“There’s really nothing like climbing a mountain and standing on top of it,” Hight said. “That feeling of just complete presence, knowing that you can achieve things that you may have not thought possible I think is a sense of courage and freedom.”

Again, the footage is remarkable. You feel like you’re immersed in this expedition. All of the episodes have that must-see quality.

Edge of the Earth poses the question: is the pursuit worth the risk? For these daredevils, it’s an obvious yes. But it also makes you wonder: at what potential cost, especially for those with families? One misstep, one wrong turn could be fatal. It’s up to the viewer to decide for themselves.

Edge of the Earth premieres Tuesday at 9 p.m. ET/PT on HBO. Subsequent episodes will follow on the next three Tuesdays at that time. The series will also be available to stream on HBO Max.