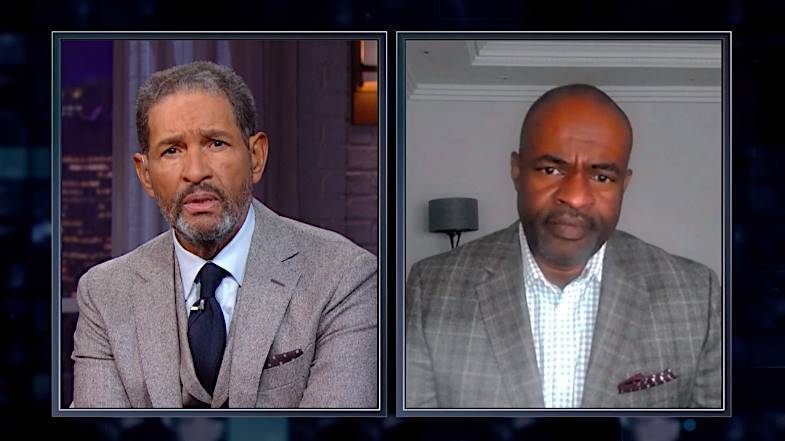 Something that’s been very notable in the fallout from the revelation of Jon Gruden’s emails to Bruce Allen and Gruden later resigning from the Las Vegas Raiders is that there haven’t been a whole lot of public comments from NFLPA executive director DeMaurice Smith. Smith was the focus of perhaps the worst email there, the racist-trope-referencing “Dumboriss Smith has lips the size of michellin tires.” He addressed that in a statement to the Wall Street Journal (which was the first media outlet to publish that email, in a story from reporter Andrew Beaton), and discussed it a little further on an ESPN podcast with Bomani Jones, but opted to let that statement largely stand for itself in other media outlets’ stories on Gruden’s emails.

But this month’s Real Sports with Bryant Gumbel, premiering Tuesday night (Oct. 19, 10 p.m. ET/PT) on HBO and HBO Max, features host Gumbel (seen at left above) interviewing Smith (seen at right above). And interestingly enough, that’s in a segment pulled together very quickly by Real Sports standards. Many of the show’s features are planned out months in advance, and Real Sports‘ list of planned segments for their October edition was sent out last Wednesday, before the Gruden story broke. (In fact, AA has learned that the segment they planned on ESPN’s Jalen Rose has been bumped to make room for this new Gumbel-Smith interview.) And while we haven’t yet viewed the full Gumbel-Smith interview, an advance transcript from HBO suggests there’s a lot of interesting stuff here, especially when it comes to Smith’s comments about broadcasters of color (perhaps particularly Mike Tirico and Tony Dungy) who defended Gruden last Sunday. Here’s some of that:

BRYANT GUMBEL: I’m not eager to minimize what Gruden did, but the bigger issue is the idea that he felt comfortable saying what he did in the forum in which he said it.

DEMAURICE SMITH: That’s it. That’s it. And to me, the next iteration of that conversation is he felt comfortable enough to say it with the people that he was on the email chain with. But the next step of that is of course the people who defended him or gave him a pass on Sunday who look more like us than like him.

BRYANT GUMBEL: Right. You’re speaking specifically of broadcasters of color who basically apologized for Jon Gruden and gave him a pass.

DEMAURICE SMITH: It’s abhorrent to think that a group of people are on that email chain being comfortable saying that. It’s equally abhorrent to me to see a group of people defend it, knowing that they live in this legacy of America’s past. They live in this hope of America’s future. We can’t be truly hopeful when those people continue to excuse or apologize for something.

DEMAURICE SMITH: There are certain people that have– have and have had a plantation mentality in this league. I think it would be unfair to sweep everybody up in this. But– I guess my– my point is for the people in this league, and I’m talking primarily of ownership, who believe that this league should be something better– they’re going to have an opportunity to match actions to their words. And if they refuse to do that, my message to some of them that I’ve made and– and now the message to them publicly is, “Your refusal to step up to the plate and demand– an investigation or demand the release of– of any evidence of– impropriety will speak volumes about whether you indeed– believe in this– in this racist mentality or this plantation mentality or– or even worse, whether you believe that the National Football League can be a better part of itself.”

Again, we haven’t yet seen the full video here, and the full segment there will certainly be worth watching for context. But these definitely do feel like Smith’s strongest public comments to date criticizing Tirico and Dungy. (And, to be fair, he doesn’t specifically mention them by name, and there may have been other broadcasters of color who also offered defenses of Gruden. But Tirico and Dungy offered some of the most notable and high-profile defenses of Gruden, and did so after that first e-mail with its references to racial tropes about Smith.)

It also feels notable that Real Sports was the TV forum where Smith chose to make these comments. HBO doesn’t provide a lot of sports news by tonnage relative to ESPN, Fox, CBS, or NBC; while they’ve aired a lot of (often very good) documentaries, the monthly Real Sports is their main look at anything newsy. Yes, Bob Costas’ Back on the Record interview show, which features Jones as a contributor, also counts here, as does Jones’ upcoming weekly Game Theory show, but Real Sports is still the main focus for HBO’s current-events sports coverage. And even with those other shows included, HBO is still producing far fewer hours of programming seemingly addressing “sports news” than any of those other networks.

Yes, there’s limited “news” at any of those networks beyond ESPN. But the other three all have Sunday NFL shows. And FS1 has daily studio programming, and CBS has CBS Sports HQ, and NBC/Peacock have a daily Pro Football Talk show and Rich Eisen’s show. So it’s interesting that Smith chose Real Sports as the venue to first really discuss this on TV, and Gumbel’s record and stature within the industry perhaps is a reason why. And it’s tremendous for HBO that they have someone like Gumbel who can not only lead this coverage, but get this kind of TV-exclusive interview.

Beyond all of that, these comments from Smith are particularly interesting for their focus on a part of this story that appears to have been overlooked. It’s notable that the publication of the “Dumboriss Smith has lips the size of michellin tires” email did not lead to Gruden losing his job; he still coached that Sunday, and many people, including Tirico and Dungy, defended him that Sunday. Gruden eventually resigned after Ken Belson and Katherine Rosman of the New York Times published further excerpts from his past emails to Allen.

That story was published the Monday after the first WSJ report on Friday, and it included comments such as that NFL commissioner Roger Goodell was a “f***ot” and a “clueless anti football p*ssy,” plus bashing of players like Michael Sam and Eric Reid. And it played a large role in the discussion of Gruden after that. But the initial email about Smith referencing racist tropes probably should have gotten more attention than it did, and it’s remarkable that prominent NFL figures like Dungy and Tirico decided to publicly defend Gruden after that email. And it’s interesting that Smith is now calling them out for that.

This month’s episode of Real Sports With Bryant Gumbel premieres Tuesday at 10 p.m. ET/PT on HBO, and is also available on HBO Max. Other segments in this episode include “NIL Gold Rush,” “NBA Giants,” and a look back at a 2015 segment on “Blind Camp.”