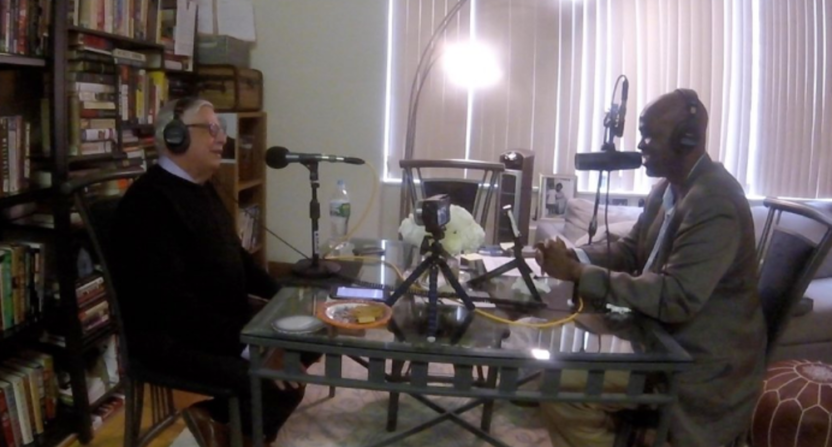 Former NBA commissioner David Stern has been the focus of plenty of criticism over the years, but some of the harshest and most backlash-provoking came from HBO Real Sports host Bryant Gumbel during the 2011 NBA lockout, where Gumbel said on his show that Stern was “infamously egocentric” and that he “has always seemed eager to be viewed as some kind of modern plantation overseer, treating NBA men as if they were his boys.” Stern recently looked back on that controversy and a whole lot more, including ESPN’s current struggles, in an almost-two-hour podcast interview with Nunyo Demasio (a long-time sports journalist for Newsday, The New York Times, The New York Daily News, The Seattle Times, The Washington Post and Sports Illustrated, as well as the author of Parcells: A Football Life) that was recorded back in March but released this past week. Here’s the podcast; Stern’s comments on Gumbel come at 65:30, and his ESPN comments are at 33:45.

Here’s a transcription of Stern’s comments on Gumbel:

Nunyo Demasio: “How did it make you feel when Bryant Gumbel dubbed you ‘a modern plantation overseer?'”

David Stern: “My reaction was that Bryant Gumbel is an idiot and that I considered it a badge of honor. He was repeating something that the players’ representatives had said in the middle of a lockout. He was just regurgitating something. He’s the same guy that did a feature on our players and tried to sensationalize their nightlife. And, you know, even though he happens to be black, he was talking about our guys and the women they hang out with, et cetera. I have no respect for him, so that didn’t upset me at all.”

ND: “Wow, that comes as kind of a surprise, because I felt he kind of went in.”

DS: “No, he wasn’t the first. When you’re involved in a couple of harsh couple of collective bargaining agreements and negotiations and lockouts, you’re going to get the race card played against you. But that never bothered me.”

ND: “Got you. Even though it’s a little different coming from him because of who he is, and the platform?”

DS: “My response was ‘I have done more for people of color than he has.'”

ND:”Wow. Okay. Another criticism he had made, he criticized you for the dress code, he said you like to keep the hired hands in their place.”

ND: “I feel, I’m sure there are a lot of white people who worked for you who would say you kept them in their place, that’s my guess.”

DS: “[Laughs], No, I would just encourage them to be all they could be. But you know what, the dress code, it’s actually quite funny. And Bryant Gumbel is sufficiently ignorant that he probably couldn’t tell you what the dress code is. With the dress code that I put into place, with the full knowledge and consent of the union even though they ran away from it as soon as I did it, was if you come into the arena, come in wearing shoes, jeans and a shirt with a collar, let’s show our respect for the game. And if you’re not in uniform, you’re on the bench, you had to wear a jacket. It raised some important issues, we had to decide how we would rule a leisure suit for a player who wanted to do that, but it was not a big deal. And our players were so well-defined physically that they took it to the next level.”

ND: “Right. And I was just about to say, I’m sure neither you nor the players who hated it at the time ever realized the opportunities it would generate because now NBA players have fashion brands, they get endorsement deals…it’s so ironic.”

DS: “Yeah. I remember getting killed because of it, they were doing cartoons of me, putting me in gold chains and stuff, but the reality was, it didn’t take long and our players went way past it. If you’re Russell Westbrook or Kevin Durant or Tyson Chandler or James Harden, you take pride in who you are, how you’re built, how you dress. And actually, it’s really part of what I’m proudest of. Our players, who had the worst reputation in sports when we all started this journey, they were in the basement of the pyramid, I’d say, and now they’re at the top of the pyramid. That gives me great pride every day. People listen to them, respect them, expect them to do the right thing. They work in their neighborhoods, they work for their communities, they speak out on issues, that’s exactly what we wished for.”

And here’s a transcription of Stern’s comments when Demasio asked what advice he’d offer to ESPN given their current subscriber losses:

“Stay the course. It’s kind of funny. We’re in such a future-focused world demanding enormous growth patterns that there may just be some businesses that hit this spectacular place where their margins are good, their profitability is high, but their ability to grow revenues, and hence profitability, has slowed down a bit. And I think ESPN is hitting that phase. I don’t know where it’s going, but I would say they should be focusing, as they are, on the digital explosion. People are going to be seeing their games, you know, one game was shown on Yahoo, a season [of Thursday Night Football] was shown on Twitter, and I read the other day that some of the big technology companies are lining up to bid for Thursday Night Football. [Amazon eventually won that.] So I think they will be pushed logically to a more digital presence.”

Stern’s comments on ESPN seem pretty smart, and they illustrate something that’s undercovered in the recent frenzy of “ESPN is failing” hype; ESPN is still profitable, and still making Disney a lot of money. The biggest reason ESPN is getting negative coverage is that its revenues are declining year-over-year, in contrast to many of the company’s other divisions, so it’s often cited as one of the company’s challenges in year-over-year focused discussions like earnings calls (see our coverage of the most recent one from May 9). Those declining revenues do matter, and there may be further challenges ahead (some research estimates suggest cord-cutting will stabilize in the next few years, but others expect it to continue at a high rate), but the baseline of “ESPN is still profitable, just not quite as much as it used to be” is an important one that’s often missed.

Moreover, Stern’s quite right that ESPN is one of many businesses that may not be able to achieve massive perpetual growth. Markets don’t always love that, wanting everything to keep rising each quarter, but there’s certainly value in continuing at the same level too, as long as the margins and profitability are good. His comments about increasing competition for digital rights are also interesting, and he’s right that it will be important for ESPN to keep expanding their digital presence, with WatchESPN, a presence in streaming services and skinny bundles, and their eventual over-the-top service. We’ll see how they execute on those fronts, but Stern’s “stay the course” advice doesn’t seem wrong.

Stern’s comments on Gumbel are also interesting. It seems clear that the 2011 “plantation overseer” comment still rankles him, at least when it’s brought up, and Stern went in hard here with “idiot,” “sufficiently ignorant,” and “I have no respect for him.” Of course, it’s hard to blame Stern for firing back at something so provocative as what Gumbel said, and there will be plenty who agree with Stern over Gumbel here. But the “I have done more for people of color than he has” comments are a bit curious, and while there may be a case there from a quantifiable standpoint (Stern was unquestionably involved in growing the NBA’s revenues and contracts, which benefited some people of color, and he was also involved in pushing for people of color to be involved in NBA ownership, as well as other things), there may be some criticism for those comments.

At any rate, this interview was certainly notable, and there’s plenty in it that we didn’t go into here, from Stern playing tennis against Donald Trump to describing his visit with Nelson Mandela to talking about if Seattle should get another NBA team. Demasio’s website has a full breakdown of what subjects come at what minute marks, so it’s a good resource if there are specific parts of this that interest you. But Stern’s comments on Gumbel and ESPN are particularly relevant for the sports media focus here, and it’s definitely interesting to hear his thoughts on those subjects.