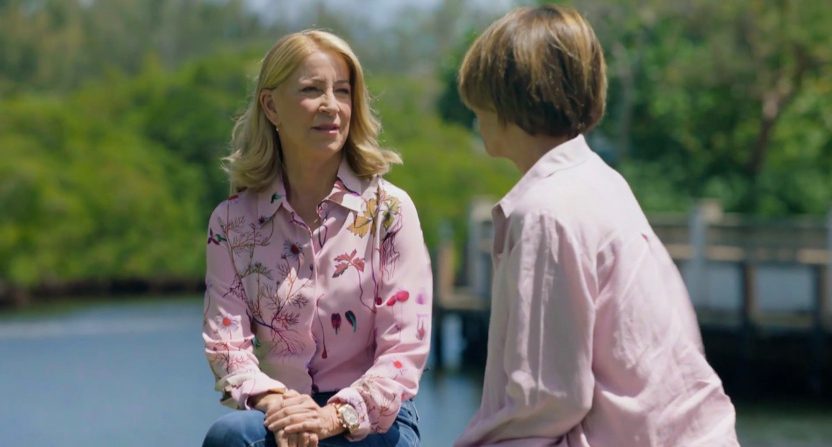 There are several interesting stories in this month’s edition of HBO’s Real Sports with Bryant Gumbel (premiering on HBO at 10 p.m. ET/PT Tuesday night), including former figure skater Keri Blakinger’s journey from Olympic hopeful to incarceration to prison reporter, scuba divers in Panama working on crime scenes, and Gumbel himself going head-to-head with New York Times crossword editor Will Shortz in Wordle. But one of the most notable in the media realm sees Mary Carillo interviewing former tennis star and current ESPN analyst Chris Evert about her ongoing battle with ovarian cancer.

The 14-minute feature has a notable early comment from Evert (seen at left above with Carillo) on how this battle is different from her athletic career, where she says “In tennis, you can control the situation a lot better. But this type of thing you can’t control.” After that, it moves on to a discussion of some of the early press treatment of Evert’s career, where she reflects on unflattering coverage she received: “There was ‘Little Miss Metronome.’ …They wondered why I wasn’t a ‘giggly schoolgirl.’ ‘She’s 16, 17, why isn’t she smiling?'” And it then goes to how Evert and oft-rival Martina Navratilova lost a notable doubles match to Evert’s sister Jeanne and her partner, and what that led to, with Evert saying “I didn’t talk to my sister for three days. …And I was sharing a room with her. I hated to lose, and I probably wasn’t the nicest person.”

Jeanne Evert passed away in February 2020 after battling ovarian cancer herself, and Chris Evert talks in this feature about how she saw her sister struggling to get through an airport shortly before her death. But Jeanne’s death wound up proving important to the rest of the family, as it turned out that she had a rare genetic disease that made her more vulnerable to ovarian cancer. That prompted Chris to get tested, and her primary doctor (David Grossman of The Cleveland Clinic, who also treated Jeanne) says in this segment Jeanne’s testing information helped them to detect Chris’s cancer earlier, saying “Without the genetic test from Jeanne, we never would have found it until it was very advanced, like Jeanne’s.”

Something that’s remarkable about this segment is that it doesn’t go for the “life or death stakes” we often see in cancer coverage. There aren’t many suggestions that this is ultimately life-threatening for Chris Evert, although it might have been if it hadn’t been detected early. But the segment illustrates how tough it can be to deal with chemotherapy even for earlier-stage cancer, with Evert talking to Carillo about her extensive wig library that she uses to avoid showing how much hair loss the treatment has given her.

This segment is also interesting for how it shows Evert’s relationship with ex-husband Andy Mill, a former U.S. Olympic skier. Despite their 2006 divorce, they’ve remained friends, and Mill drives Evert to her treatments here and sits with her through them. He tells Carillo “We’ve got three great kids together, and we always told each other, even after the divorce, ‘If anything happens, I’ve got your back.'”

The five-year survival rate for the type of cancer Evert has is only 90 percent. But, as Carillo notes, that’s close to Evert’s career winning percentage, so she’ll take those odds. And, towards the end of the segment, Evert talks about how fortunate she was to learn of this early thanks to her sister Jeanne, saying “I was so lucky, I was so lucky.” And near the end, Evert says “I know she would want me to survive.” It’s certainly positive that Evert feels she has that kind of support, and it’s positive that she’s getting the treatment she needs here.

This month’s episode of Real Sports with Bryant Gumbel premieres Tuesday, June 21 at 10:00 p.m. ET/PT on HBO. It’s also available to stream on HBO Max. This segment features Mary Carillo as the correspondent and Nick Dolin as the producer.