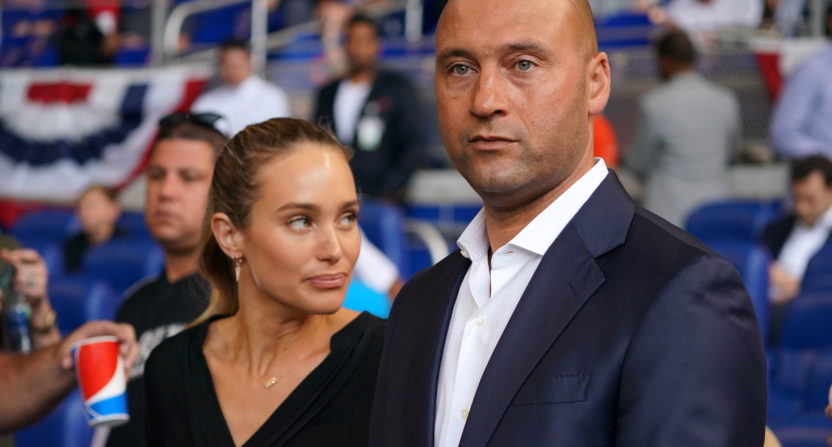 The Miami Marlins are bad. This is no secret. Having team traded Giancarlo Stanton, Marcell Ozuna, Christian Yelich and Dee Gordon, the team was widely pegged as one of the worst in baseball, and they’ve performed as such so far this season, with a 5-14 record and -55 run differential.

The only person who seems hesitant to admit the Marlins reality is rookie CEO Derek Jeter, who got a bit testy during a sitdown with Bryant Gumbel that will air on HBO’s Real Sports on Tuesday at 10 p.m. ET. Jeter was somewhat defensive throughout much of the 14-minute Real Sports segment, but the interview really went off the rails when Gumbel asked about “tanking.”

BRYANT GUMBEL: “If you were tanking, would you tell me?”

DEREK JETER: “Tanking? What is– no– tanking?”

BRYANT GUMBEL: “Tanking is — not trying your hardest to win ball games in — every day.”

BRYANT GUMBEL: “If you trade your best players in exchange for prospects it’s unlikely you’re going to win more games in the immediate future–”

BRYANT GUMBEL: “Not in so–”

BRYANT GUMBEL: “No, I get that. But I guess not in so many words–”

DEREK JETER: “You don’t. We have two different mi– I can’t wait to get you on the golf course, man. We got– I mean, I can’t wait for this one.”

BRYANT GUMBEL: “No, I just– I’m– I’m realistic. You really expect this team–”

DEREK JETER: “I expect this team to–”

BRYANT GUMBEL: “Compete is one thing–”

BRYANT GUMBEL: “You expect them to contend?”

DEREK JETER: “I do. I do. If I don’t believe with the– in the players that we have on the field, who’s going to believe in them?”

BRYANT GUMBEL: “But as an executive, it looks like you’re delusional if you believe otherwise–”

Jeter smiled throughout much of this exchange, and the “mentally weak” comment was clearly said somewhat in jest, but the former All-Star was clearly bothered by the line of questioning.

It’s hard not to see Jeter’s responses as a bit disingenuous. Jeter presumably knows that tanking refers to front-office strategy, not player effort, his attempt to pretend otherwise didn’t particularly work. Instead of responding to Gumbel’s legitimate question, he tried pulling the “you just don’t understand” card to suggest that we mortals simply can’t comprehend his line of thinking.

It continues to be remarkable that a player who won so much, in every sense, as a player, has lost so much since taking over the Marlins last fall. Jeter survived a 20-year MLB career hardly ever making the wrong move. Now that he’s an executive, he rarely seems to make the right one.