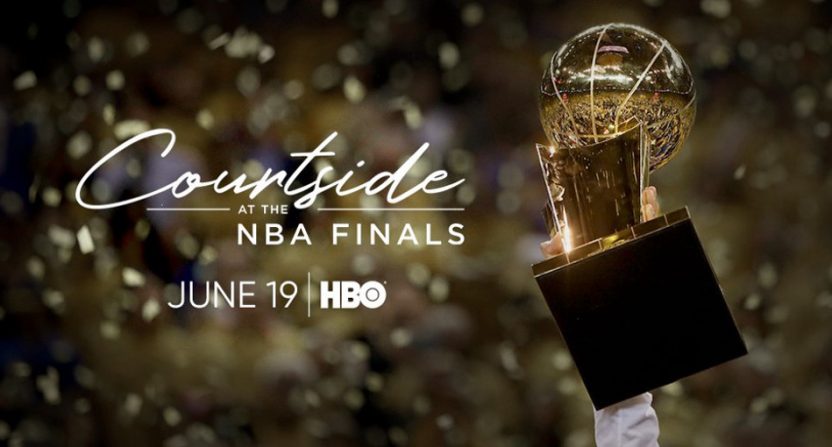 There’s another TV project coming out of Bill Simmons’ HBO deal. HBO announced Tuesday that they’ll be partnering with the NBA and the Bill Simmons Media Group for a one-hour special titled Courtside At The NBA Finals, which will air Tuesday, June 19 at 9 p.m. Eastern/Pacific with a replay at 11 p.m. Eastern/Pacific, and which will also be available across HBO’s on-demand and streaming services. Simmons himself will serve as executive producer. Here’s more from the network’s release:

Debuting just days after the conclusion of the 72nd edition of The Finals, the show will provide viewers with a unique and unprecedented inside look at the NBA’s championship series, as the Eastern (Cleveland Cavaliers) and Western (Golden State Warriors) Conference champions compete on the biggest stage of the basketball season.

Peter Nelson, executive vice president, HBO Sports, says, “This show will give our subscribers a first-hand look at the nuances of each victory and defeat. We are privileged to team up with the NBA and Bill Simmons for this unique presentation.”

There’s next to no information there on what this will actually entail, as it’s only described as “an unscripted one-hour special chronicling the sights and sounds of the 2018 NBA Finals.” Maybe that’s a 24/7 style behind-the-scenes show, something HBO has plenty of experience with? Maybe it’s that mixed with some analysis from Simmons and other Ringer personalities, perhaps in the vein of After The Thrones/Talk The Thrones? Or maybe it’s something entirely different. We’ll see if more information emerges ahead of the special’s release, but for now, the notable part here may just be that Simmons’ deal with HBO has produced another TV project.

When Simmons signed on with HBO in the summer of 2015 (with a contract that started that October), it seemed like a big part of the focus would be TV projects. Yes, Simmons had The Ringer as well, and HBO was an initial investor there (as anyone who reads the disclosure at the end of any of the many, many Ringer articles about HBO shows knows), but there was a lot of talk about him as both an on-camera and behind-the-scenes TV figure, which helps explain why HBO would give him a contract reportedly worth over $20 million across three years. (The marketplace was also a factor, as there were lots of suitors for Simmons after his ESPN exit. And it’s notable that Simmons’ deal with HBO is exclusive for TV content; he can’t land TV content elsewhere during its duration, so that adds to the price.)

But Simmons’ Any Given Wednesday talk show was cancelled after just five months and 17 of 37 ordered episodes, with low ratings playing a major role there. And his first HBO show on the producing side (After The Thrones, which aired on the network’s digital platforms) was cancelled after one season. The Ringer wound up landing essentially the same show at Twitter/Periscope and calling it Talk The Thrones, but that move is still notable, as a Twitter show isn’t direct product for HBO. So through last summer, the returns for HBO on the Simmons deal didn’t appear to be all that impressive.

Things are looking a bit different lately, though. The Andre The Giant documentary (a Simmons/Ringer Films/HBO/WWE co-production) debuted in April to great reviews and better ratings, with HBO’s release on Courtside noting that it “registered the highest premiere viewership for an HBO Sports documentary in 15 years.” That certainly could encourage HBO to do more documentaries in that vein, and to do more with Simmons. And now he has another project airing on HBO.

How well this goes over may depend on the details of just what’s involved, and timing may also play a role. This would air two days after a potential Game 7, which seems about perfect, but if the series ends much earlier (the earliest possible conclusion would be in June 8’s Game 4), a June 19 special may feel quite a bit after the fact. But there certainly is some potential here, and it makes sense to have Simmons involved in something focusing on the NBA, one of his strongest subjects.

While a one-hour special alone isn’t necessarily a huge deal, it’s another credit to the ledger when evaluating the Simmons/HBO deal. And if this works out real well, it might be a sign of future possibilities between the network and Simmons. His three-year deal ends this October, and many have figured for much of its running time that HBO will let it expire. But Andre The Giant was certainly a success, and now there’s another TV project with Simmons coming out. So maybe there’s more of a case for HBO’s future involvement with him than there was previously. How much of a case that is can be debated, but this is at least a bit of a result for the Simmons/HBO contract.