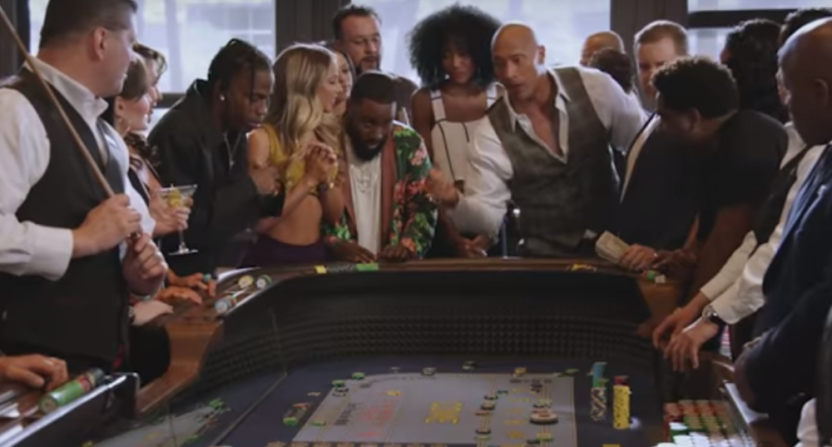 Who’s excited for HBO’s Ballers to feature a plot about putting the NFL in Las Vegas? Yep, that’s exactly what’s happening towards the end of the Season 3 teaser HBO released Thursday, with Dwayne “The Rock” Johnson (NFL player-turned-financial manager Spencer Strasmore on the show) saying “I want to bring a football team to Las Vegas.” Oh, and this teaser starts with two-time reigning NBA MVP Steph Curry talking to Strasmore, and also includes Strasmore’s agency expanding from Miami to “LA, Chicago, New York, London!”, plus plenty of fast cars, gambling, and scantily-clad women. Here’s the teaser:

The focus on “global expansion” may play into the off-screen things we know about how filming moved from Miami to Los Angeles (reportedly over tax incentives). Miami’s a very recognizable city, so setting less of the show there may make it much easier to continue production in a different location. And it certainly could be interesting to see what attempts to make the agency at the center of it more global lead to. (It’s also notable seeing this open with a call between Strasmore and Curry. Will Curry be playing a significant role this year, or is he only there for a brief cameo?)

Beyond that, the discussion of bringing a NFL team to Vegas is really interesting considering the timeline of the Raiders’ announcement of their upcoming move there. That move became official in March, but had been discussed for years. However, there were times this past fall when it didn’t look like a sure thing. So setting a Ballers storyline around that is notable, especially as we don’t know exactly when filming took place; Ballers was renewed for a third season last July and moved its sets from Miami to LA in November, but it’s not clear if the season was shot before or after that Vegas move became official (or perhaps both). In any case, that’s certainly a notable current NFL event, and it’s interesting that Ballers is discussing it.

We’ll see how this third season goes. The first two have received a mixed bag of reviews from critics, but Ballers certainly has its fans (including Massachusetts senator Elizabeth Warren, apparently). And the teaser here makes it look like it’s going to stick to a lot of the formula that’s worked for it so far. But that Vegas plot may be particularly worth watching, both for how the story plays out on-screen and what the reaction is to it (especially given the move currently going on in the NFL). In any case, with the $200 million lawsuit against them dismissed and with fans like Warren in their corner, Johnson and the Ballers cast should be riding high at present. We’ll see if that continues when Season 3 premieres July 23 on HBO.