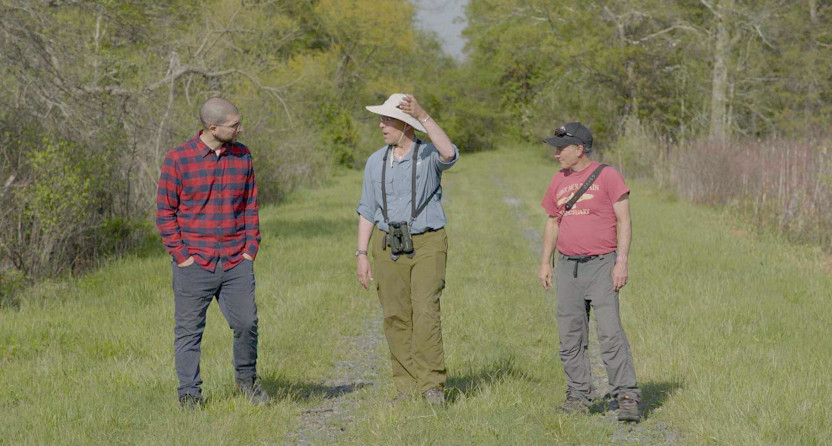 The lineup of HBO’s Real Sports with Bryant Gumbel for this month marks the debut of a new correspondent, but someone who has a remarkable history with the show. That would be Ariel Helwani. Helwani will be helming the “Bird Brains” segment on the World Series of Birding, a segment produced by Chapman Downes and Evan Burgos. While this is Helwani’s first time as a Real Sports correspondent, he worked at the show as an intern 19 years ago, back in the summer of 2003. There, he worked behind the scenes on many projects, including the prominent “Risky Business: Deaths in Wrestling” segment. Now, he’s back as a Real Sports correspondent. Helwani (seen at left above in a still from “Bird Brains”) discussed his return to Real Sports in a Twitter thread recently, and then spoke to AA about what this experience returning to the show means for him.

“Honestly, it’s surreal. It’s very, very surreal to me, because HBO as an entity, as a network, has always been in my heart, because they were the first ones to give me any kind of chance. In my junior year at Syracuse, at Newhouse, the journalism school, there was an alumni database, where you’d go on and type in different networks or a sport and it would give you people in the alumni network who worked at these places that you could reach out to for internships. I printed out a bunch of numbers and email addresses and wrote to a bunch of people, but I didn’t get anything back.”

“And I remember that I loved HBO Sports, I loved their documentaries, I loved Real Sports, and the Bob Costas show that they had at the time. And I remember just typing in “HBO,” and an email address came up that was just, like, “info@hbosports.com,” and I just wrote them an email, and someone wrote me back two days later, and I got the internship there in the summer of 2003. And if you would have told that kid all these years later, 19 years later, that I would return as a correspondent…”

Helwani said he’s long admired Real Sports, and he’s thrilled to get the chance to serve as a correspondent there.

“To me, Real Sports is the gold standard in sports journalism, it’s the 60 Minutes of sports, whatever analogy you want to make. To me, they’re #1, and they’ve been #1 for several decades now, and when I think of them, I think of Bryant Gumbel, and Frank Deford, and Mary Carillo, and all these legends, and I’m like ‘How the hell did this kid from Montreal end up here?’ It’s very, very surreal; I watch my piece, and I feel like someone’s playing a prank on me, like I’ve won some sort of fantasy camp for a day where I can pretend to be a Real Sports correspondent.”

He said Real Sports stands out for its longevity and quality, and that’s shown in how eager people are to be featured on it.

“The incredible journalism, the credibility, the reputation. The face of the program is Bryant Gumbel, who is a legend, a Hall of Famer. The fact that he has been around so long and is still so respected, and all the things he has done, it starts there. And every correspondent that has ever been on. And everyone wants to be featured on Real Sports, because you know when it’s Real Sports, it’s quality.”

Helwani said getting to work on Real Sports as a correspondent also showed off dimensions of the show he hadn’t seen before.

“And now that I’ve gotten the chance to actually be part of the machine, and not just as an intern or PA, but to see every aspect that’s part of making the story, and how great the producers are, and the bells and whistles. There are little things that I would never think to do again or try again, but they want it to be perfect, and their standard is so high. I’ve never quite experienced that in my career. A lot of the things I do on the internet, you just get it out there and move on to the next one. So it’s been very cool to see just how much TLC they put into everything.”

An interesting part of Helwani’s return is that many of the key producers of Real Sports when he was an intern are still there, which he said was a great draw for him to return.

“To me, that’s the best part. It would be cool if I was just coming back, the story of me returning, intern turned correspondent, but the fact that all these people are still there…I used to work in the dub room, which no longer exists, but if anyone needed a tape dubbed, Beta tapes or VHS tapes, they would walk into this room and sit there and there would be two decks, and they’d use those to dub B-roll footage or whatever. On my first day, that’s how I met Andrew Bennett, the producer who was working on this wrestling piece, because he was sitting there watching and dubbing wrestling footage. And luckily, I asked him what he was doing, and that’s how my summer of 2003 was spent working on that wrestling piece for Real Sports.”

“And my job in the mornings was I would come in and go through all the boxing sites, all the trade websites, and I would put together a packet of news, articles and things like that. And I would walk to Nick Dolin‘s office, Joe Perskie’s office, Chapman Downes’ office, and give them these packets. And the fact that here I am 19 years later and working on-air as a correspondent just makes it that much greater. Tim Walker was one of the producers on that wrestling piece, I sat in his office, we went to Connecticut, we were there when Vince McMahon took the papers out of Armen Keteyian’s hands, we were in the car driving back talking about how crazy that was, and now he’s calling me and talking to me as a correspondent. This is fantasy stuff.”

He said Real Sports‘ retention of many of those figures is a big part of what’s led to its sustained success.

“They’re tremendous, and it speaks to just how good they are. But also, HBO Sports as an entity has evolved a lot; the fact that Real Sports is still standing, still thriving, still the flagship, still very relevant, is pretty remarkable. And I think it’s because those same people are there. Bryant is still there, the vast majority of the correspondents are still there, the vast majority of the producers are still there. …There are very few that I didn’t know as compared to those I do know, which is incredible, because the last time they saw me, I was a junior with an afro. It’s really remarkable, and I think that’s one of the major reasons why they’re still around and thriving, because that core fabric is still very strong.”

As for “Bird Brains” in particular, Helwani said that was an appealing segment for him to take on given some of the quirkiness of the subject matter.

“I consider myself someone who can do many different things in journalism. I can do the serious stuff, I can have fun, I can be self-deprecating. One of my heroes in the world of journalism, in documentaries in particular, is a man named Louis Theroux, who is very popular in England. He has a documentary series called Weird Weekends on the BBC. He’s a quirky guy who does quirky things, and I love the fact that he’s very versatile; I’ve been watching him for years. So when I was told about this, I was like ‘Oh, this kind of has a little bit of Louis Theroux in it.’ I appreciate the fact that it’s not too serious and they think that I can have fun with it, but also be respectful of these men and women that take this event and this hobby very seriously. I just thought it was a really cool way to introduce myself and have a little fun and do something new.”

Helwani also said this segment it provided a chance for him to show off his versatility.

“One of the big things for me after leaving ESPN is that I don’t want to just be viewed as the MMA guy, I don’t want to just be viewed as the combat guy. I want to be viewed, quite honestly if I can be so brash, as the best interviewer in sports. And if I want to do that, I need to do many different things. And this is perfect; some people might be like ‘I don’t want to do birding,’ I was like ‘No, I love this stuff.’ I love learning about these quote-unquote subgenres of sports, talking to interesting people, learning about what they’re doing, and presenting it to the public in a fun way. So when they told me about it, I was like ‘Sign me up, I’m so there.'”

This is Helwani’s first segment as a correspondent for Real Sports, but he’s looking forward to more. And he’s thrilled about the opportunity to return there, 19 years after that fateful internship.

“It’s very emotional for me, and it’s just a big honor to be a part of this great franchise.”

This month’s edition of Real Sports with Bryant Gumbel premieres on HBO at 10 p.m. ET/PT on Tuesday, July 19. It’s also available to stream on HBO Max.