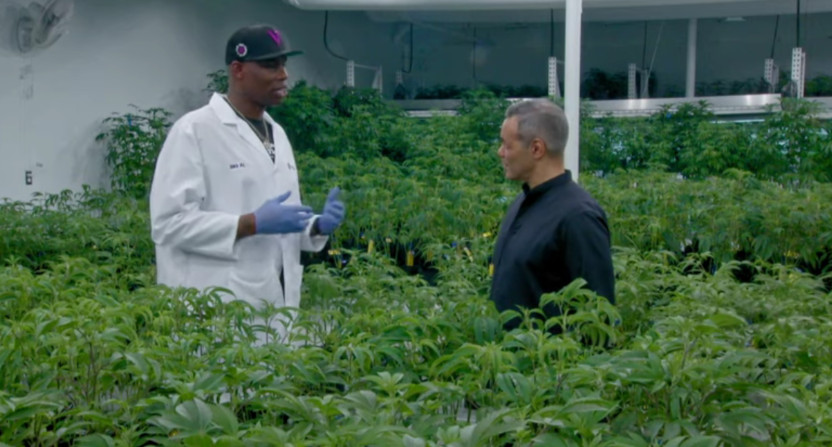 HBO’s Real Sports with Bryant Gumbel sometimes shines most when it’s taking on difficult topics, including COVID-19 and racial injustice, extreme MMA weight cutting, backcountry skiing deaths, sexual harassment and abuse against female sports reporters, and the former athletes who have turned to psychedelic drugs as treatment for brain injuries. The psychedelic drugs segment was led by correspondent David Scott, who has been involved in many of Real Sports‘ tough stories recently (he also did the story on MMA weight cutting and one last year on pro sports teams applying for government PPP funding), and he has another interesting and somewhat related segment on the latest edition of Real Sports (premiering Tuesday at 10 p.m. ET/PT on HBO, also available on HBO Max). This time, in a segment called “NBA Green Gold Rush,” Scott talks with former NBA players Al Harrington and Matt Barnes about their moves into the legal cannabis industry. Here’s a clip, which includes Harrington (seen above in the middle of one of his greenhouses talking with Scott) discussing his beginnings in this industry 10 years ago, and Harrington and Barnes both talking about marijuana usage in the NBA (with Barnes talking about smoking before games):

The full segment is notable beyond that clip, though. Both Harrington and Barnes estimate that a majority of NBA players use cannabis (Harrington estimates eight in 10, Barnes says that he learned at one point almost half the league was on the NBA’s drug program after a positive test), and that’s interesting in and of itself (especially around wider conversations about leagues going away from regular tests for marijuana, but continued Olympic/World Anti-Doping Agency policies that kept U.S. sprinter Sha’Carri Richardson out of Tokyo over a positive test). But what’s maybe more interesting still is how both Harrington and Barnes talk about using their NBA money and their profile to help new Black entrepreneurs get into this space.

As many have noted over the years, punishment for marijuana possession and usage has been disproportionately enacted against Black communities and other communities of color. Some of that dates back even to Richard Nixon’s administration and its start of the “War on drugs” (by that name, at least), and it had a lot to do with who people voted for, with former Nixon White House counsel and assistant to the president for domestic affairs John Erlichman telling Dan Baum ahead of a 2016 Harper’s piece that their drug policy actions were politically motivated:

“The Nixon campaign in 1968, and the Nixon White House after that, had two enemies: the antiwar left and black people. You understand what I’m saying? We knew we couldn’t make it illegal to be either against the war or black, but by getting the public to associate the hippies with marijuana and blacks with heroin, and then criminalizing both heavily, we could disrupt those communities. We could arrest their leaders, raid their homes, break up their meetings, and vilify them night after night on the evening news. Did we know we were lying about the drugs? Of course we did.”

And an American Civil Liberties Union (ACLU) report last April had some data on that, and on how the ratio of punished Black people is not improving despite growing legalization and decriminalization in the U.S.:

War on Drugs policies disproportionately target people of color and particularly Black people, and marijuana laws are a prime example. The proof is in the data: Nationwide, Black people are 3.6 times more likely than white people to be arrested for marijuana, despite similar usage rates. That’s roughly the same rate of disparity that existed seven years ago, when we released the first iteration of this report, The War on Marijuana in Black and White. In fact, since 2010 racial disparities actually worsened in 31 states.

So amongst all that, it’s certainly notable to see a couple of prominent former NBA players not only speaking out in favor of cannabis, but walking the talk, using their own money to try and help other minority businesspeople get into the legal cannabis business. Harrington has been doing that since launching ViolaBrands (named after his grandmother, who saw considerable improvement to her glaucoma from marijuana usage, as he tells Scott in this segment) in 2011, and Barnes has been doing so more recently, profiling former NBA players launching cannabis businesses on his All The Smoke Showtime Basketball video podcast (with Stephen Jackson) and looking to help others launch businesses in his hometown of Sacramento. There are big hurdles to doing that, though; Harrington tells Scott that the current marijuana industry only has an estimated four percent Black ownership, and that there are huge upfront costs with licensing, dispensaries, and growhouses.

“It’s very, very expensive to participate in the cannabis industry, and a lot of our people just don’t have those resources.”

Barnes says it’s crucial to make minority ownership happen given the way marijuana has often been weaponized against people of color.

“That’s why we have to do our part as people who have been able to make a little bit of money to use our platforms and use our resources to help people get into this space. …People lost their freedoms over it, families have been destroyed over this plant that was put here to help us.”

And Harrington says this is a crucial opportunity for restorative justice and community healing in the wake of those past injustices.

“It’s not only the people who are in jail, but it’s also all the people in the community who were affected as well. Our people really just deserve the opportunity to participate. …We want ownership this time around. You think about all the billions of dollars that will be generated in cannabis, the goal is for us to have enough of it that we can go back and invest in our communities.”

He says he envisions doing this for the rest of his life.

“This is going to be my life’s work. I don’t think I ever get to the point where I’m done and kick back. I think this is just something that’s going to consume me until I get to the next life.”

“NBA Green Gold Rush” is a thoughtful, nuanced, and well-done look at the subject, also including Scott interviewing one of the business owners Harrington is investing in and also including him asking Harrington and Barnes about why they want to be involved in this and how they’d react to people criticizing them using their fame this way. It’s a smart and insightful examination of the post-career ventures of these players, and it helps to show why they’re doing what they’re doing.

[HBO on YouTube; this month’s Real Sports with Bryant Gumbel premieres at 10 p.m. Eastern/Pacific on HBO on July 27, and will also be available on HBO Max]