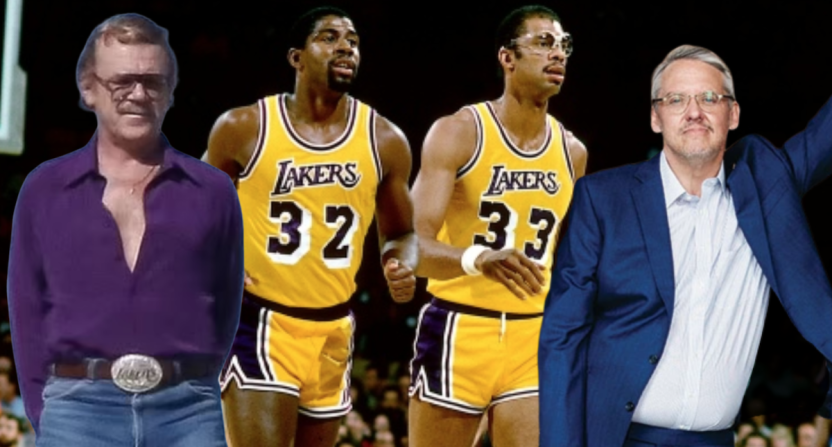 The series is based on Jeff Pearlman’s 2014 book Showtime, but with a rival premium cable network already having that name, a different title was always going to be necessary. Now, one has finally been chosen. According to The Wrap, the series will be titled Winning Time: The Rise of the Lakers Dynasty.

A bit wordy with the subtitle, perhaps. But it answers the “What’s this thing about?” question. And fans of the Lakers know that “winning time” was a favorite phrase of legendary point guard Magic Johnson, referring to the final four minutes of a game during which the outcome is often decided.

HBO officially announced the title from the series’ new Twitter account and a short teaser video that also mentions that Winning Time will premiere in March, though an exact date isn’t given.

24 hours until tip-off. You might want to stretch. #WinningTime pic.twitter.com/PJGMpkA7Yv

— Winning Time: The Rise of the Lakers Dynasty (@winningtimehbo) December 8, 2021

Interestingly, the teaser says that the title is streaming in March on HBO Max, which appears to indicate that Winning Time will not be playing on HBO’s linear cable channels. Previous reports on the series hadn’t indicated this would be a streaming-only series and that seems a bit surprising with the success that McKay has had with Succession for HBO.

But a sports-based series without a big star might be more of a niche play. Also, HBO Max is in the business of attracting subscribers, so putting this series on the streaming platform might entice curious fans to sign up.

HBO Max’s Twitter account followed up on the “24 hours until tip-off” tease by saying a “first look” at the series would be available Thursday (Dec. 8). Will that just be a short teaser or can a full trailer be expected? Not much has been seen of the production, other than set photos posted by the Daily Mail in early October.

The Lakers series has also been in the news recently amid a Vanity Fair feature that reported casting John C. Reilly as team owner Jerry Buss is what caused the friendship between McKay and Will Ferrell, who wanted the role, to split. However, Matthew Belloni says that’s not the entire story in his “What I’m Hearing” newsletter for Puck News (subscription required).

According to the former Hollywood Reporter editor, Ferrell — a big Lakers fan — has told friends and associates that he didn’t want to do the series because of its negative angle toward the team and raunchy, outlandish tone. (Belloni also reminds readers that Michael Shannon was initially cast as Buss, not Reilly, before leaving the project. But Ferrell was indeed upset when he was passed over for Reilly without even being considered.)

Furthermore, the Buss family, Lakers executives and players, and the NBA hate Winning Time‘s portrayal of the events and people involved. One of Belloni’s sources compared the series to a 1980s version of Entourage or Ballers, with rampant drug use, partying, and sexual escapades. As a result, HBO shouldn’t expect the NBA to promote the show — or provide free publicity by criticizing it — even on fellow WarnerMedia network TNT and its Inside the NBA program.

Belloni’s subscription newsletter includes plenty more on the story, including Kareem Abdul-Jabbar’s thoughts on the show and his agent rejecting an attempt to reach out from the actor playing the Lakers center, Solomon Hughes.

UPDATE: As promised, the first trailer for Winning Time was posted online Thursday afternoon (Dec. 9). There is a very Boogie Nights-like vibe to the preview and it certainly seems to include racier themes that reportedly makes the NBA uncomfortable.

— Winning Time: The Rise of the Lakers Dynasty (@winningtimehbo) December 9, 2021