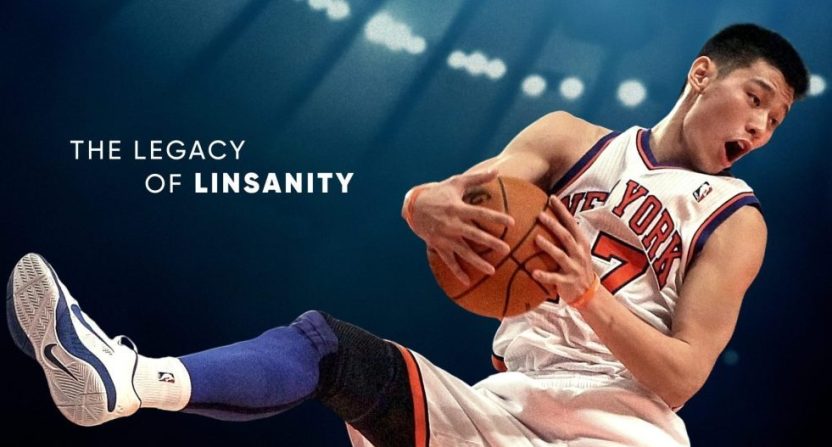 Over ten years later, “Linsanity” still seems supernatural, a phenomenon that gripped the nation. We couldn’t explain it. We just knew that we couldn’t look away.

Back when being on the cover of magazines mattered, Jeremy Lin graced the front of Sports Illustrated (twice), Time, and People. All in two weeks. An undrafted free agent from Harvard University had the top-selling NBA jersey for the 2011-12 season.

Who was this guy and why did so many love him so much?

The HBO documentary 38 At The Garden  (debuting on the network at 9 p.m. ET/PT on Tuesday, Oct. 11, also available on HBO Max) explains the fascination and importance of this unique Asian American basketball star. The title refers to the peak of Linsanity when Lin scored 38 points in Madison Square Garden to lift the New York Knicks over the Los Angeles Lakers.

Lin was not Kurt Warner, another undrafted unknown who led the St. Louis Rams to the Super Bowl and became an NFL Hall of Famer. Lin’s unexpected dominance lasted only 13 games, leading the New York Knicks to 10 victories. However, for many, the impact of that brief moment continues to linger. The 38-minute film, directed by Frank Chi, packs a lot of insight into a short amount of time.

Linsanity gave Asian Americans a sense of pride, shattered stereotypes, and forced others to re-examine biases. That’s the power of sports as a meritocracy, where the only thing that should matter is: can you play?  Unfortunately, people are misperceived and/or underestimated far too often.

You can’t effectively tell the Lin story without addressing the racist depictions that are still shown in the entertainment industry today. Minhaj, who knew Lin as a teenager, expertly breaks down why stereotypes of Asians in the media as “small, passive, unathletic, submissive” are so damaging. He punctuates his point by saying, “Yeah, it’s kind of harmful if I have big dreams.”

Few people had bigger dreams than Lin, who early in 38 At The Garden says: “There’s no way any of this should have been possible.”

According to the NBA Racial and Gender Report Card, for the 2011-12 season, 78.1 percent of league players were Black or African American. Asians were less than 0.4 percent. Lin was the longest of long shots.

But being underestimated was nothing new for the Taiwanese-American. Despite being a California high school player of the year and a state champion, he received no Division I scholarship offers. Yes, he went to Harvard, but Ivy League schools don’t give out athletic scholarships. There he became an all-conference player good enough to be noticed by the NBA, but not deemed worthy enough to be drafted.

After one year with the Golden State Warriors, the backcourt-needy Knicks claimed Lin off waivers in December 2011. In 38 At The Garden, New York teammate Tyson Chandler remembers not knowing who Lin was when the point guard first arrived. Not surprising. Lin was the last guy on the roster.

Soon everyone would know who Lin was. On a team with Carmelo Anthony, Amar’e Stoudemire, and Chandler, Lin briefly became the biggest star in the NBA.

We watch sports to witness things we haven’t seen before, and this was new. The documentary captures the excitement. It’s fabulous to hear Lin recall the “out-of-body experience” of torching the Lakers. It’s even more fun to hear others describe how they felt.

“I just kept having to look away and look again,” said Ling, who executive produced 38 At The Garden. “‘Is this really happening?’ And it wasn’t just Asian people who were talking about it. Everyone was talking about it.”

America fell in love with Linsanity. But as quickly as it appeared, the hoopla faded. By March, Lin’s season was over after undergoing knee surgery. He didn’t even remain a Knick, signing as a free agent with the Houston Rockets.

38 At The Garden does not go into the reports of resentment from some Knicks players who allegedly were jealous of the attention Lin received. And we don’t hear from then-Knicks coach Mike D’Antoni, who would have added a valuable perspective.

Lin went on to play nine years in the NBA, winning a championship with the 2019 Toronto Raptors (and becoming the first Harvard graduate to play in the NBA Finals). He hasn’t been in the league since, and is currently playing in China. He remains extremely popular with 2.3 million followers on Twitter and 1.9 on Instagram. That’s because Linsanity went beyond basketball. 38 At The Garden shows why Lin continues to be an inspirational story.

For Asian Americans, and all Americans.