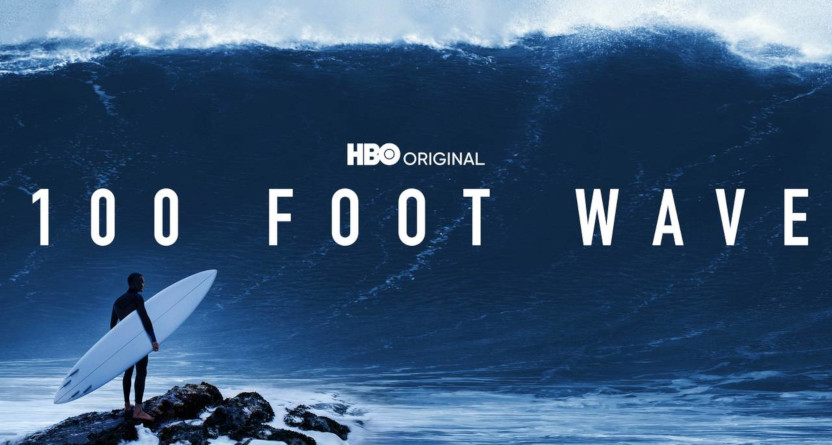 One of the best sports documentaries in recent years was HBO’s 2018 documentary Momentum Generation, which followed a group of top American surfers through the 1990s and early 2000s and won the 2019 Sports Emmy for Best Long Sports Documentary. 100 Foot Wave is from a different filmmaker (director and executive producer Chris Smith, rather than Momentum Generation‘s Jeff and Michael Zimbalist) and is in a different format (a series with six hour-long episodes rather than a 104-minute film), but it shares a sport (surfing), a network (HBO), and a wide-ranging storytelling approach that pays big dividends in the end. 100 Foot Wave (all episodes are now available on HBO Max and HBO on-demand) is highly recommended for those with any level of interest in surfing or extreme sports in general, and recommended for those who like good stories regardless of sport. It’s the best sports documentary series I’ve seen in some time.

Like Momentum Generation before it, 100 Foot Wave is simultaneously telling several different stories. In this case, the two primary stories are about famed surfer Garrett McNamara’s quest to surf the world’s biggest waves and about the town of Nazaré, Portugal becoming a leading big-wave surfing destination. Those stories are quite intertwined, especially in the first two episodes that really illustrate how McNamara went to Nazaré and (with the help of local government, businesses, his manager/girlfriend and then wife Nicole, and several other surfers) built a place no one had really considered for surfing into a major destination, but also in the later episodes where Nazaré takes off and McNamara hits some injury setbacks, but remains involved with the surfing scene there.

But there are also other stories interacting with these throughout. Several other surfers receive their own spotlights, including Britain’s Andrew Cotton, Ireland’s Al Mennie (especially in the early episodes), France’s Justine Dupont, Brazil’s Maya Gabeira, Hawaii’s Kai Lenny (especially in the last couple of episodes), and Nicole’s brother C.J. Macias. Each of them have their own fascinating stories to tell, and Smith does a good job of showcasing who they are and what they care about. And beyond those out surfing, 100 Foot Wave does a tremendous job of showing us this whole world.

Smith’s interviews with WSL Big Wave Tour general manager Bill Sharp and other renowned surfers like Laird Hamilton and Buzzy Kerbox are an excellent way of contextualizing tow-in surfing as a whole and how that relates to the Nazaré project. Also, interviews with the Portuguese locals involved in filming, safety, and sponsorship give a fuller picture of everything that’s required to pull off surfing at Nazaré, whether that’s with individuals out there free surfing or with full WSL events. And Nicole McNamara is frequently interviewed, and she’s excellent, giving a look at the work she does to keep Garrett’s career going and the fears she sometimes has when he’s out there.

Something that’s remarkable about 100 Foot Wave as compared to many sports documentaries is the incredible tension and the life-or-death stakes with these waves. Yes, there’s some risk of injury and possibly even death in all sports, but it’s very clear here just how much these men and women are risking every time they head out for a big wave, and just how much can go wrong with even the slightest mistake. The stakes are very high, and this is a tense watch, similar to the likes of Free Solo. And there are notable discussions of the risks and of the challenges in getting back out there after major injuries from many of the participants.

Another element that stands out with 100 Foot Wave is one also seen in Momentum Generation and in HBO Max’s recent U.S. women’s soccer documentary LFG: strong use of archival footage. Smith recently told Variety‘s Addie Morfort that he started filming on this two years ago, but you wouldn’t necessarily know that from the documentary, which goes back much further in time and has good-quality footage and interviews from much of that earlier period. As he said to Morfort, “Something we came to learn is that surfers document their lives quite extensively. So, we were able to access a lot of footage that had chronicled [McNamara’s] experiences over the years. From that we were able to make something that was bigger in scope than we originally intended.” And that scope really pays off here; this isn’t just a few minutes of interviews about past events and then a jump to the present day, but rather a relatively comprehensive look at a decade of Nazaré surfing history.

Of course, that scope comes with the drawback that this is a six-hour series rather than a single documentary film. That’s not going to be appealing to everyone, especially in a peak-streaming era where there’s so much to watch. But it’s quite possible to experience this series on a smaller level; for those looking to do that, episodes one, two and six are particularly recommended, or even just one and two. Even episode one would be an interesting and entertaining watch if it’s the only one you check out. And it might tempt you into seeing more of this series.