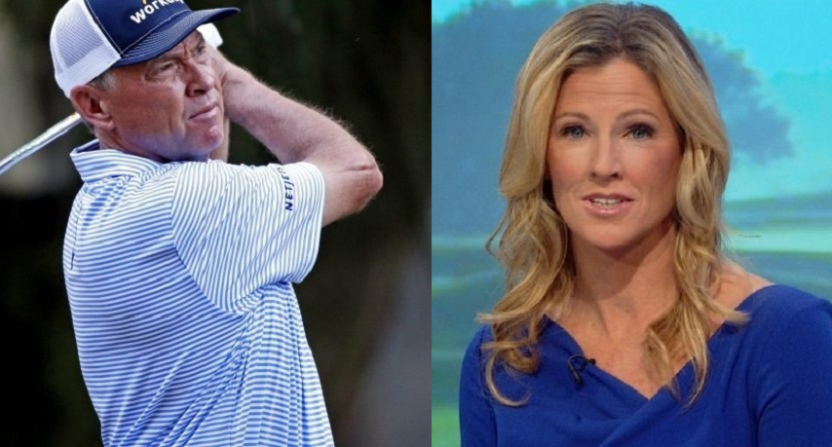 When CBS reshuffled their longtime golf team, booting Peter Kostis and Gary McCord to the curb, it was seemingly a move made in part so they could add Davis Love III to the crew.

At the time, they touted the decision as a way to add more youth to the broadcast (Love is 56), while also bringing on someone who had a closer relationship to many of the current stars of the game. CBS had a stronger case there, with Love having captained two American Ryder Cup teams within the last decade, but Love didn’t make much of an impression at the beginning of his foray into life after playing. Part of that was that he never really seemed interested in life after playing; a PGA Tour winner in 2015, Love still competes somewhat regularly, having played thirteen Tour events since the start of 2019, though he’s made only three cuts.

CBS also started him as an on-course reporter, and while there’s no doubt Love may feel more comfortable on the course than in the tower, that’s still a very difficult job to do well from a broadcasting perspective, and Love tended to disappear more into the background. A sharp contrast to longtime Phil Mickelson caddie Jim “Bones” McKay, who took to the role immediately at NBC. Incidentally, Bones is going back to caddying, he’ll be on the bag for Justin Thomas for the next two weeks, including at the PGA Championship.

2020 saw a massive gap in the action, meaning Love’s broadcasting career was starved of reps early. He’s also had a trying time off the course, as his Georgia home burned down in late March.

The house was 12,000 square feet and three stories. “I think it might have taken 10 minutes for the house to be completely engulfed, and it was completely gone in less than half an hour,” Love said. “All we could do was stand there and watch. It was beyond awful.”

Now, after less than a year, Love announced via a statement on Twitter he’ll be stepping down from his broadcasting role.

“CBS gave me a tremendous opportunity to be a member of their great golf team. I appreciate and am in awe of the amazing work they produce each week. Since golf returned in June, CBS has allowed me time to focus on my family, play a few tournaments, and bring some stability back in a difficult year. I have realized in this time my passion to play is strong, and my heart yearns to be home. I thank Sean (McManus), David (Berson), Harold (Bryant) and Lance (Barrow) and all the people at CBS Sports for their support and understanding and allowing me to step away from CBS. Beginning next week at the PGA Championship my focus returns to playing, and supporting my family.”

CBS (and every network) has already had to scramble to find ways to make broadcasts work during a pandemic. That’s included having analysts work remotely, isolating Jim Nantz in the tower, and adding confessional cams and microphones to players. Having to replace a voice just a week before the PGA Championship (the first golf major in more than a calendar year thanks to the pandemic) is just another thing on the list. Love, meanwhile, is eligible for the PGA Championship as a past champion, and retains playing status on the PGA Tour for as long as he wants it as a lifetime member. If his heart wasn’t in broadcasting, this move is best for everyone, including and especially viewers.

One way they’re going to do it: by adding Kelly Tilghman. The longtime Golf Channel broadcaster left television in 2018 having spent 22 years at the network, becoming the first woman to serve as the lead voice for PGA Tour coverage. Tilghman announced her decision to join CBS on Twitter Wednesday night:

My time at home the last few years has been priceless. I’m now looking forward to reconnecting with my other family- golf! Excited to share that I will be contributing to @CBSSports coverage of the @PGAChampionship next week. I hope tv is like riding a bike!

It’s possible this is just a one-week return for Tilghman, though that seems unlikely, especially based on Tilghman’s tweet, which makes it sound like she’s coming back for a more permanent position. That makes a lot of sense considering the condensed schedule this fall, and the likelihood that Jim Nantz could be more occupied than normal with NFL duties. Nantz’s normal backup for golf, Andrew Catalon, would also be unavailable for the same reason. Tilghman makes a ton of sense, then, to have on board as an experienced anchor and lead voice, and if that scenario does indeed play out, having a woman leading golf coverage on network television would be an important, welcome, and overdue development.

That’s all speculation, though. All we know for sure is that she’s going to be part of the PGA Championship, which is also moving from CBS and Turner to CBS and ESPN, with ESPN promising way more in terms of coverage hours than Turner and TNT either could or would offer in the past. Tilghman presumably won’t be a like-for-like replacement for Love, as she’ll probably be working either in a booth (or from a remote studio, depending on how the network decides to manage social distancing), but Love was always presumably going to be playing the PGA anyway, so that probably didn’t catch CBS off guard.

Instead, working Tilghman in with eyes on a flurry of sports in the coming months would seem the most likely scenario. Regardless of the exact need she’s filling, it will be nice to have her back, and hopefully she can help shake up the staid CBS formula more than DL3 did.