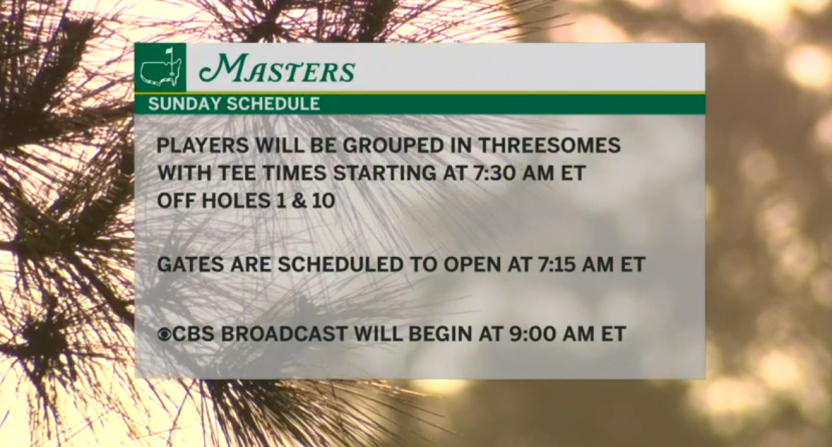 There’s long been a joke that the folks at Augusta National would prefer to install a dome over the property, all the better to provide the hermetically sealed environment they aim for.

When you zoom all the way out on the tracker function, you can see the dome that ANGC has built over the course. #TheMasters pic.twitter.com/gOyTv4jJ2y

Tomorrow, that would actually come in handy. With storms in the Augusta forecast for the afternoon, the Masters will adjust their schedule for the final round, moving tee times up to the morning. CBS will thankfully come on the air at 9 AM Eastern for live coverage. Here’s a statement from the tournament:

Given the possibility of severe weather Sunday afternoon, groupings and tee times for the final round will be adjusted.

CBS will broadcast the final round live, beginning at 9 a.m.

“The safety of everyone on our grounds is paramount,” said Fred Ridley, Chairman of Augusta National Golf Club and the Masters Tournament. “We also believe the earlier start will give us the best opportunity to complete the Masters on Sunday. This decision should benefit everyone – the players, our patrons and our fans watching around the world. Given the competitiveness and drama of this year’s Tournament, we look forward to an exciting conclusion tomorrow.”

It makes sense; as of now, the real storms aren’t expected until late in the afternoon; starting early should give them a real chance to finish. And while CBS would obviously prefer a Sunday evening ending, coming on early and finishing early on Sunday is a much better alternative than, say, the nightmare scenario of Tiger Woods in contention during a Monday morning finish.

We essentially get Breakfast at the Masters, too, which could be a nice change of pace. Hopefully the rain holds off and we can get the whole round in tomorrow, because the current leaderboard is absolutely stacked, with Tiger near the top.