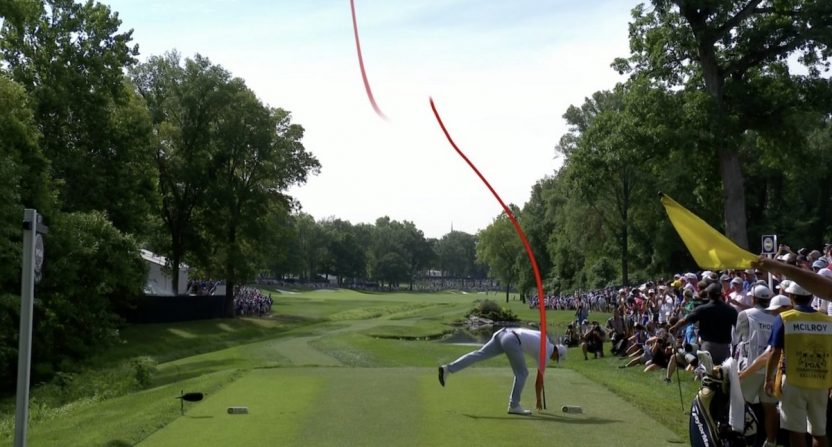 Friday morning at the PGA Championship was a thrilling spectacle for golf fans, as Brooks Koepka and Charl Schwartzl each shot 63 and Kevin Kisner came up one shot shy of the mark.

Unfortunately, unless you were at Bellerive, you didn’t see any of that thanks to the Turner coverage windows for the first two rounds of the event. It’s an annual expectation for the PGA Championship, which already struggles for an identity and for the interest the other three majors never have trouble generating. To have Turner essentially go with old syndicated dramas all morning on Thursday and Friday while the year’s final major kicks into gear remains a baffling decision.

Updating a tally here for 3rd year in a row: TNT showing 2 eps of Charmed and 4 of Supernatural while 1st round is up and running. Going live at 2pm on Thursday. https://t.co/sTGwreuPIv

The 2-8 PM Eastern window is a limited one, more in line with what the Masters offers on Thursday and Friday, and the PGA doesn’t have the Masters’ ability to artificially suppress supply in hopes of increasing demand.

The real fun comes on Thursday morning once people realize they have to go online to watch Tiger/Rory/JT.

Once Turner finally came on the air at 2, things didn’t get much better. We saw plenty of the Tiger/Justin Thomas/Rory McIlroy group, and plenty of Jason Day and Phil Mickelson as well, but those were online featured groups already. Plenty went missing; we saw none of Tony Finau’s insane no-par roller coaster front nine (7 birdies, a triple, and a bogey).

And as Golf Digest’s Alex Myers charted, the number of shots we actually got to see was limited:

And the proof is in the 60 minutes of coverage beginning with the super group of Tiger Woods, Rory McIlroy and Justin Thomas teeing off at 2:48 p.m. (We didn’t start right at the beginning of the coverage because sometimes there are a lot of front-loaded ads and recaps). Here’s how the next hour looked by the numbers. First, the good:

Around the green shots: 2

And now, the bad:

The commercial with that awful “Connection” song: 4

That’s a lot of commercial breaks for an hour of coverage, and Turner wasn’t shy about the timing. They also had a few technical difficulties throughout (including a ghost in the shot tracer that’s plagued both online and broadcast coverage), and they zeroed in on group that were already available online as featured groups, which is a problem for more than just the PGA Championship but it’s even more frustrating on this stage.

Those 68 shots were hit by a total of only 13 golfers. So not a lot of variety in terms of types of shots shown or players. Of course, any time Tiger is playing, he is going to dominate coverage (as he should), but this felt like we were just watching the two afternoon featured groups (Woods, McIlroy and Thomas, and Phil Mickelson, Jason Day and Keegan Bradley) on PGA.com. Network coverage should be more comprehensive than this.

To top things off, weather blew in early in the afternoon (thunderstorms are always possible when you have your tournament in St. Louis late in the summer) and canceled play for the day at 4:35 PM Eastern, meaning after a full morning without golf, anyone who had planned on spending the day with the broadcast was out of luck.

Quick summary
-Multiple 63s shot Friday AM, we saw none of it but got six eps of Supernatural/Charmed
-TV started at 2 p.m. ET
-Play suspended 4:35 p.m., eventually called for the day
-Now catching up on what Hank's been up to pic.twitter.com/IHxwJDZ8gq

The PGA Championship moves to May next year, which isn’t going to do the event any favors in terms of standing out; the only possible benefit is coming earlier in the golf calendar, between the Masters and the U.S. Open, but that’s not going to make it feel like a bigger event. Not having broadcast partners who attempt to elevate its importance is an even bigger concern, though.

As of now, just going off the broadcast, it feels more like a mid-level PGA Tour event than the 100th edition of one of golf’s most important, tradition and history-rich championships.

The best possible fix in the short-term: show more live golf from more players. That would go such a long way for everyone.