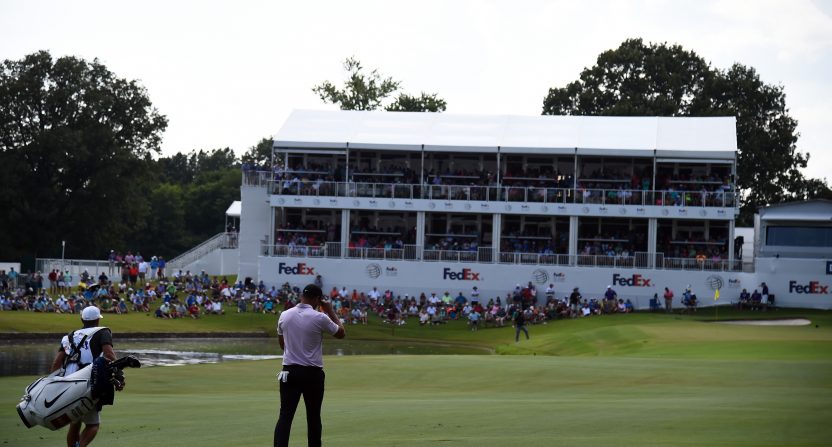 We wrote yesterday about the PGA Tour soliciting bids for their broadcasting rights two years before they’re up, with interest from Fox, ESPN, and Amazon along with incumbents NBC (and NBC-owned Golf Channel) and CBS.

WarnerMedia is also in the running, and according to John Ourand at Sports Business Daily, they’re interested enough to consider offering the PGA Tour an existing network to take over, likely HLN or truTV. This could be an asset considering the PGA Tour is apparently very eager to have their own network, and the built-in distribution that HLN and truTV have could be very attractive options.

During its initial conversations with media companies, the PGA Tour has made it clear that it wants to control its own linear TV channel. NBC execs have discussed letting the Tour take an ownership stake in the NBC-owned Golf Channel, which has carried the Tour’s cable TV rights exclusively for the past 13 years. WarnerMedia owns channels like HLN (Headline News), which has distribution in 86.3 million U.S. homes, or truTV, which is in 84.1 million homes. Those two would be the most likely channels to be flipped if the company follows through on its initial plan. Other WarnerMedia channels like TBS, TNT, CNN or Cartoon Network almost certainly would not be part of any plan to create a golf-focused channel.

Obviously, flipping an existing network into a hypothetical PGA Tour Channel has issues. truTV, for example, is important to sports fans for the opening days of the NCAA Tournament every spring; throwing basketball on truTV now is probably even more incongruous than throwing it on a PGA Tour network would be. Things like that can get worked out, but it’s still likely an uphill battle; if NBC is serious about blending ownership of Golf Channel, that would still seem like the best fit overall.

It’s still a sign that WarnerMedia is treating this as a real opportunity, though, and as Ourand mentions, they have reason to be:

WarnerMedia has not finalized its negotiating strategy for Tour rights and still is weeks — or months — away from submitting a formal bid. It’s possible that the company’s ultimate submission does not include a plan to flip one of its channels, but the fact that it has even considered such a plan shows how serious it is about the PGA Tour rights, which currently reside with CBS, NBC and Golf Channel. WarnerMedia also is launching a direct-to-consumer streaming service called HBO Max next spring; its execs have said that they want live sports to be part of its programming mix. Rights to PGA Tour events could fit in with that strategy.

The PGA Tour’s decision to take bids in an effort to get the next deal settled now remains one of the more fascinating elements of this. It’s possible they (with good reason) view media rights as a potential bubble, and want to lock things in now, or perhaps given the nature of the rights deals currently in place for other sports they viewed this time period as the best moment to draw in the widest number of suitors.

The downside, though, is that if they do decide to move on from CBS and/or NBC, that could lead to two years of a lame duck relationship. Things could be negotiated down in those circumstances; ESPN bowed out early from their Open Championship deal when NBC won the future rights, for example. But if, say, CBS gets passed over, it’s not a matter of a network abdicating one weekend of content; CBS televises around twenty PGA Tour events per year. That’s a big chunk of programming to fill.

There’s clearly an incumbency advantage, but strong competing bids like what WarnerMedia is apparently considering could make things much more interesting.