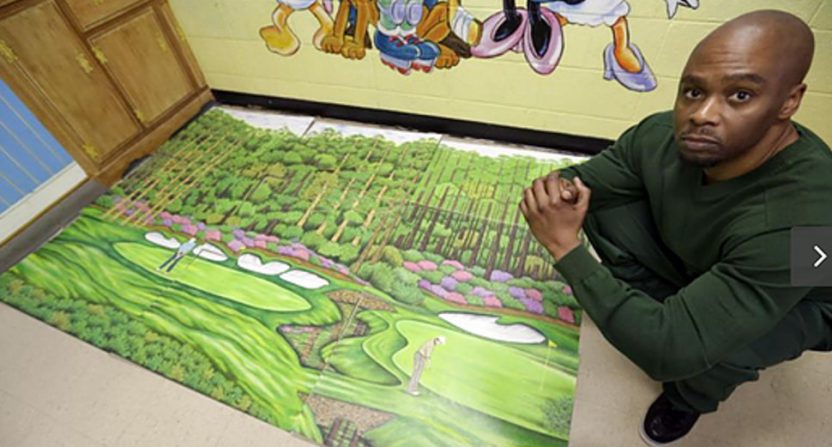 Media attention has sometimes led to further investigations of criminal cases and to some wrongful convictions being overturned, but it’s unusual to see that come from an investigation from Golf Digest. As Max Adler writes at the magazine, that’s what’s happened with the case of Valentino Dixon, though. On Wednesday, the Erie County District Court in Buffalo, New York vacated the murder conviction of the 48-year-old Dixon, allowing him to go free; he’d served 27 years of the 39 years-to-life sentence he was handed after being convicted of killing Torriano Jackson at a street party in 1991.

There were all sorts of problems with that case and that trial, and they only came to light after Dixon became well-known for his beautiful drawings of golf courses (despite never playing the game himself or setting foot on a course), part of his overall passion for artwork. Golf Digest noticed his golf drawings after he’d made about 100, and they looked into his case as well when Adler teamed up with him for a first-person profile piece in 2012. That piece raised questions about his guilt and his conviction, and led to further media attention from news and sports outlets, pro bono legal work, and more.

And his current lawyer said the attention paid to this case, which started with the magazine raising questions about his conviction, was vital to this outcome:

It rises from a confluence of factors, according to Donald Thompson, who along with Alan Rosenthal, filed Dixon’s latest motion (which included the Golf Digest article) pro bono. “Once a case crosses a certain threshold of media attention, it matters, even though it shouldn’t,” Thompson says. “It’s embarrassing for the legal system that for a long time the best presentation of the investigation was from a golf magazine.”

Of course, it’s not as simple as a magazine noticing problems with a conviction and someone simply walking free as a result. It took six years to get this overturned despite the many problems with Dixon’s conviction (more details can be found on his website here) , including no physical evidence, perjury charges against those who said he didn’t do it, and a videotaped confession from another man. That would be LaMarr Scott, who admitted responsibility for Jackson’s death soon after it happened and maintained that later, except for a short period where he changed his story under pressure from the prosecutor; he officially pled guilty Wednesday before Dixon’s conviction was vacated. (He’s already serving a life sentence for his role in a different armed robbery that left a man a quadriplegic, but this may further reduce his chances of parole.)

But yeah, even with all those problems with the case, this was still a six-year process. And, as Thompson noted, there were a lot of people involved, including the Erie County DA’s wrongful convictions unit and students from the Georgetown University Prison Reform Project.

Thompson says Golf Digest’s work eventually was eclipsed by the recent report filed by the Erie County district attorney’s wrongful convictions unit, which is a new type of department popping up in various districts these days. Their report was helped by the Georgetown University students, a group of undergraduates who have also created documentaries, websites and social-media campaigns around three other individuals thought to be wrongfully imprisoned, as part of a class. “They did a great job of speaking to witnesses who could still be located, as well as getting Chris Belling [who prosecuted Dixon] to say things at variance with positions he’s argued in the past.”

On one hand, there’s the positive outcome of Dixon being freed, and Golf Digest and Adler deserve a lot of credit for not just writing about the prisoner with a talent for portraying golf courses, but presenting his story about being innocent and looking into the facts of his case. That played a significant part in getting this ball rolling. But on the other hand, this is a frightening story about the conviction of an innocent man, and how it took over two decades to get anyone to look at it, and then six years of pressure following national media exposure to get it vacated. And it makes you wonder how many wrongfully-convicted people there are out there who don’t happen to have a talent for drawing golf courses.