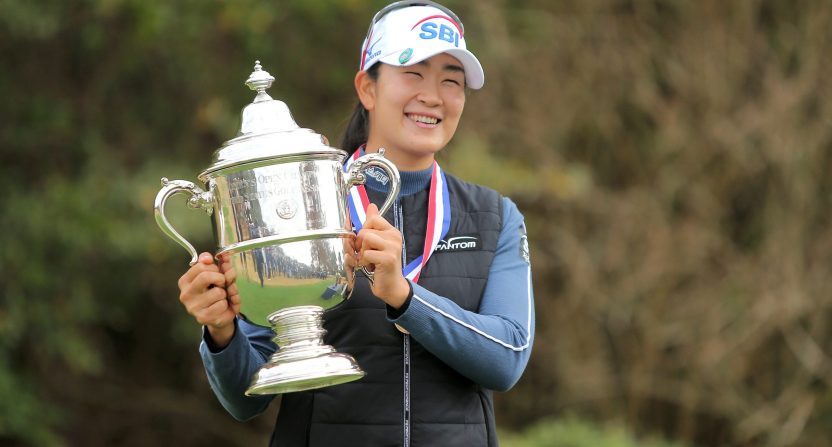 The U.S. Women’s Open tees off tomorrow at the Olympic Club in San Francisco.

If you weren’t aware of that, it shouldn’t be a surprise; women’s golf tends to get shunted well behind the men’s tours and majors. It even lags behind the Champions Tour (the Golden Parachute Tour) in terms of prime television real estate and prize money. That’s obviously absurd. The visibility and coverage is much different for a variety of reasons, of course, including sexism; some places just aren’t going to cover women’s golf or women’s sports. (Which is obviously gross.)

An economic reality exists for some media companies, though; in 2021, margins are so thin for independent media that they can’t cover everything, and they can’t cover events that aren’t going to drive traffic immediately.  There’s no long game to be played, that is, even if editors and outlets would love to be doing more women’s golf. To that end, the United States Golf Association announced a program designed to, in essence, subsidize coverage of the game.

It’s called the Driving Equity Grant Program, and it’s a fascinating concept for a governing body to explore.

“Today, women’s sports, including golf, are stuck in a recurring cycle where media outlets don’t always receive significant return on investment when they cover events that lack household names. Simultaneously, it is nearly impossible for a sport to build household names without consistent and rich storytelling from the media,” said Craig Annis, the USGA’s chief brand officer. “As the governing body of golf, we feel a deep responsibility to be a leader in breaking that cycle in our sport, and we believe the Driving Equity Grant Program is an important next step in that progress. This is not a problem that will be solved overnight; however, if the entire industry works together and shines a brighter light on women in the game, we have an opportunity to change the future of golf.”

It’s quite an approach to take here. Annis is certainly correct that the problem won’t change itself. The mission is absolutely sound, and reflective of the current state of media.

As to how the program works, here’s the overview, again from the USGA:

The money isn’t huge; it’s $50,000 for a total pot, of course, and the minimum/maximum amounts cap the amount of coverage that will come from this. Still, it’s a meaningful number, and assuming the USGA will be picking and choosing to maximize exposure by outlet option, there could be a real increase in exposure for a fairly minimal outlay.

Presumably if it’s successful, too, the pool could increase year-over-year.

What will be important, though, is ensuring that the grant recipients are still allowed editorial freedom. Some major golf media outlets are already a bit, shall we say, deferential to players and golf powers in general. Any hint that the USGA is putting their thumb on the scale to get “positive” coverage however they define that would be met with plenty of backlash, that would possibly outweigh whatever gains were made for the women’s game. (What could be worse: rewarding outlets for puff pieces as a sort of pseudo-payola.)

That’s a longshot; my interactions with the USGA have always been positive and cordial, and they’ve been more forward thinking in terms of allowing non-traditional media access to various events than other golf tours. They’ve just tried to work with me to provide what I need to do the job how I want to do it. (That’s just me, of course, but given how relatively low-profile my work has been in the golf space, that they’d treat me that way says a lot about their commitment to this approach.)

Having said that, it’s still worth monitoring. For now, it’s a creative, small program that could make a big impact in a positive way. Hopefully the execution lives up to the billing.