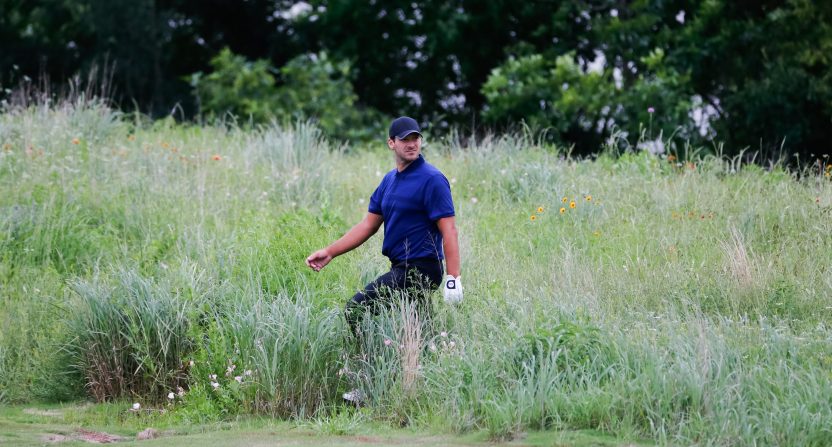 Tony Romo is once again playing a PGA Tour event via a sponsor’s exemption, teeing it up today at the AT&T Byron Nelson. He’s there because it’s at Trinity Forest in Dallas, and the tournament apparently assumed having Romo involved would increase attendance and/or exposure.

Considering this post exists, maybe they have a point. Romo is a very good golfer relative to the general golfing population, but he is very much not at the level of a touring professional, as has been demonstrated every time he’s done something like this. The fan interest is real, though; before the tournament, for example, Romo won a Twitter poll to be featured on NBC Sports Gold coverage Friday morning, outside the traditional broadcast window.

(It should be noted that the poll isn’t exactly an even one, and it tipped even more to the other side once Marc Leishman withdrew from the tournament. The Tour clearly wanted Romo in the end.)

Which group would you like to see featured in our Friday morning @PGATOURLIVE coverage of the @attbyronnelson?

And if you were in any way curious about Romo’s golf game, the PGA Tour social media accounts were here for you. Did you want to spend nearly twenty minutes watching Romo warm up on the range? Because you still can!

All credit to Romo: he started well! He opened with a birdie at the first, gave a stroke back at the fifth, and then delivered what must be his best moment playing in a professional event at the short par 5 seventh:

After that eagle fell, Romo was -2 through seven holes, and it was actually possible to wonder if maybe he could make the cut, which is rare for an amateur of any kind on the PGA Tour, much less a player in Romo’s category.

And then came the rest of the round. Romo gave back the eagle strokes with a double bogey on the ninth hole, and then the wheels really came off on the back nine:

That 76 left Romo sitting T148 after the first round. He finished ahead of just five players, one of whom withdrew after two holes. The leaders, meanwhile, are much farther ahead, with Denny McCarthy at -8 and a big group sitting within a few shots of him.

In fairness to Romo, there are a few mitigating factors. First, he played in the afternoon, when the wind really picked up. Most of the low scores came in calmer morning conditions, when players were also more able to take advantage of a course softened by a ton of rain. Second, he’s just not good enough at golf. 76 is actually very respectable, considering he was also a world-class athlete in another sport. He’s also a tremendous broadcaster.

There is maybe some value to be had in sending out a player like Romo to raise the profile of an event like the Byron Nelson, which has fallen off a bit in recent years and, like many tournaments in the spring, is going to be squeezed a bit by the new schedule. It also helps illustrate just how good at golf the best players are, and just how the thin margins at the top of the pyramid get a bit wider a few levels down. Golf would arguably be better served by giving these spots to rising young stars, but in the end it’s just one spot, and Romo isn’t a complete joke out there, so it probably isn’t worth getting worked up over it.