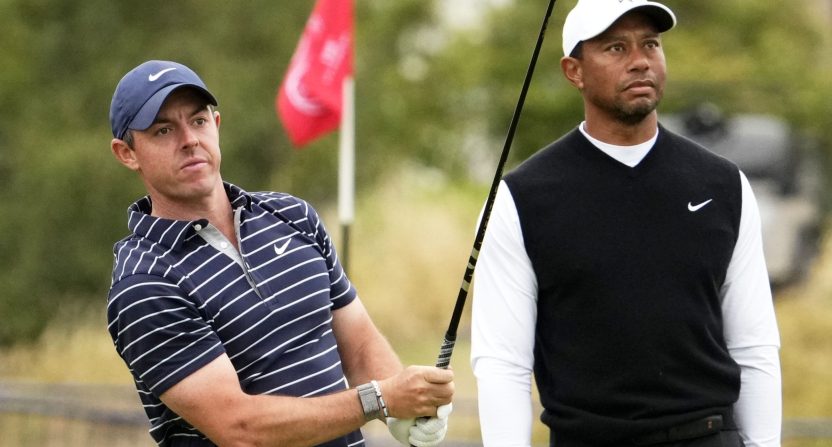 News last week that Tiger Woods flew to Delaware to take part in a players-only meeting with some of the top names on the PGA Tour sent a few big waves through the world of golf and golf media.

Plus it led to one of my favorite Twitter jokes in recent memory:

also knocking out the Eddie Bauer holiday catalogue shoot while he's there https://t.co/ZzDd9Ds0mJ

Over the weekend, more details emerged from the meeting itself, with No Laying Up reporting on the changes this influential group of players want to see the PGA Tour make going forward as it continues to attempt to fend off LIV Golf‘s deep pockets and willingness to lose money in an effort to (partially) drain the Tour of talent to build the top golf league and (mostly) launder Saudi Arabia’s human rights record via sportswashing.

The No Laying Up report is well-worth a read, especially as it details how the PGA Tour schedule could once again change going forward, which could possibly have repercussions for the massive rights deal that just went into effect this year with NBC and CBS (plus ESPN for streaming.) Those outlets would presumably have some say in any sort of structural shift.

That, though, is a bigger and separate discussion. This piece is focused instead on reporting from Golfweek‘s Eamon Lynch, who has details of what sounds like, essentially, a golf skills competition series featuring top PGA Tour players that won’t take place on a golf course.

Tiger Woods and Rory McIlroy are spearheading a new venture that will have the world’s top golfers competing against each other in a non-green grass, stadium environment, Golfweek has learned. Multiple sources say a series of events will be held in partnership with the PGA Tour and that more specifics could be announced by Commissioner Jay Monahan this week at the Tour Championship.

The one-day events are designed to complement the PGA Tour schedule and will launch in 2024, according to multiple sources familiar with the concept. Early thinking suggests the showdowns — which will be technology-forward and staged with a live audience — could run January through March, with a finale held later. Discussions about broadcast and gaming partners are underway.

Lynch also cites a source at NBC while noting that the network has an option to carry the series, if it so chooses. It’s hard to know exactly what this might look like, although there are a few pretty basic assumptions that could be put together here. “Non-green grass, stadium environment” is one key element in Lynch’s report from which we can assume that it’s probably going to be at a driving range or TopGolf type facility within reasonable distance of whichever PGA Tour stop is in play that week.

“Technology-forward” would seem to hint at something like a TopGolf-style competition, with various electronic and TrackMan monitoring substituting for actual on-course golf. Lynch’s report states that details are forthcoming very soon, possibly including the format and more, so this thing sounds pretty likely to happen.

Will it be a success? Well, maybe. The Match franchise has demonstrated that there’s an audience for golf content that isn’t the standard PGA Tour/major championship format we’ve seen for decades now. But it’s also demonstrated that the players (or celebrities) involved are the real draw. Obviously if Tiger and McIlroy are central figures, that’s a huge step in both attracting an audience and possibly attracting other big names, too.

A few details seem a bit hazy here, though. For one thing, 2024 is a very, very long way off at this point, especially with how quickly the LIV encroachment continues to grow. The PGA Tour could be in a much, much different place of strength by then. Tiger Woods is still the biggest draw in golf, but he’s also going to be 48 by the time this series is set to begin, although given his current health status maybe giving him another year to rest up is a solid choice.

Plus, like, what the hell is this going to look like on television? In theory the idea of seeing the best players in the world try to pull off cool shit on a range equipped with plenty of tracking information and cool targets sounds like fun. In practice, though, that could all come off very differently. It’s also hard to see what kind of long-term value this sort of venture would have.

But hey, maybe it ends up working. Tiger and Rory are two of the biggest names possible to be in charge of something like this, so why not give it a shot? It could at the very least spice up some of the early parts of the PGA Tour calendar, especially during a tough time of the year as golf competes against football and college basketball on the weekends. Having primetime exhibitions on a weeknight could be a great way to try and steal viewers.

We’ll presumably know soon just what it all looks like, and from there it will be a lot more easy to judge how feasible the whole thing is.