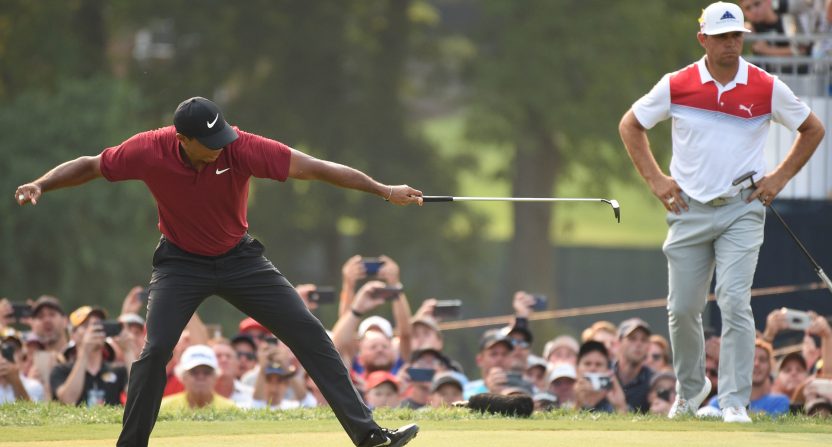 Brooks Koepka won the 2018 PGA Championship. In fairness, we have to start there. He’s won three of the last six majors that he’s played in and deserves all the credit in the world for being one of golf’s best young stars. Koepka is the present and the future of the game and deserves to be mentioned alongside the likes of Spieth, McIlroy, Thomas, and others that will carry golf forward.

But Brooks Koepka will never move the needle like Tiger Woods. Nobody can. And that’s who we will always remember from Sunday at the 2018 PGA Championship.

It’s cruel for Koepka to be overshadowed when winning his second major of the year, but it’s a fact of life when talking about Tiger Woods and golf, even now that we’re more than 10 years after Woods won the last of his 14 major championships at the 2008 US Open.

Why does it have to be that way? Why did Woods’ second place finish lead every single sports talk show on Monday instead of the guy who actually won the tournament? It’s simply because Woods is the most culturally significant golfer to ever step between the ropes, has done more to bring people to the game than anyone else in history, and is one of the very few athletes who can single-handedly make you stop whatever you are doing to watch them.

If we’re speaking about the 2000s, the post-Jordan era, Woods is one of the two or three biggest stars in all of sports. It’s probably Tiger and LeBron competing for the top spot this millennium so far. We’ve seen it all with Tiger – his dominance at the beginning of the century, his shocking fall from grace in the tabloids, his crushing injuries, and now, what could turn out to be his successful comeback against all the odds. Now that Woods is trying to write a redemption narrative, he has more fans than ever before because people see him as an underdog trying to win his 15th major. (Imagine ever writing that sentence 10 years ago.)

Where Tiger really stands apart, not just in golf, but in all of sports, is how much he means in relevance and significance. Tiger doesn’t just move the needle more than any other golfer, but any other athlete. Period.

Woods’ presence on the Sunday leaderboard at the PGA sent ratings up 69% and were the highest since 2009 with a 6.1 rating, which just so happens to be the last time Tiger was in contention. Earlier this summer, Woods propelled the British Open to its highest final round rating since 2000, when he won at St. Andrews. It also tied the 2006 tournament, which (you guessed it!) was won by Woods.

The Tiger Effect might be even more prominent in the non-majors throughout the year when he’s on the leaderboard. When Woods was in the hunt on Sunday earlier this year at Bay Hill, the tournament produced a 3.6 overnight rating. Brooks Koepka’s victory at the US Open back in June also drew a 3.6 overnight rating for the final round.

Stop and let the absurdity of those numbers sink in. Woods’ presence at a run-of-the-mill PGA Tour event carries as much weight in the ratings as a major championship does without Tiger. It’d be like a game featuring LeBron James and the Lakers drawing the same ratings number as a Rockets-Celtics NBA Finals game or a Week 4 Patriots-Bills game matching a Jaguars-Rams Super Bowl just because of Tom Brady.

Nobody in sports has the same impact that Woods has, at least from a television standpoint. Does anybody come close, though?

Michael Phelps and Usain Bolt could be part of that conversation as two of the most decorated Olympians of all-time and the best ever at their sports. However, Olympic ratings overall have been going down every four year cycle. Ratings from 2016 in Rio fell 15% from 2012 in London with Bolt and Phelps still Olympic mainstays. Moreover, it’s not like their races outside of the Olympics have ever been must-see TV. Even though Phelps and Bolt are two of the biggest stars in world sports, it’s hard to argue that they have a Tiger-like effect on ratings.

Likewise, LeBron James and Tom Brady will certainly never hurt ratings, but again, it’s harder to quantify the positive impact. Both players lost in their championship game/round this year and saw viewership numbers decrease from previous years. For LeBron, the lack of competitiveness of the Cavaliers certainly hurt viewership numbers. And for Brady, the NFL’s overall downturn in viewership is the predominant factor in the Super Bowl continuing to decline in viewership year over year.

The athlete that may come closest to Woods’ impact is Serena Williams. In looking at the ratings of the Wimbledon women’s final in recent years, Williams’ four appearances averaged 2.5 million viewers. The three finals without Serena averaged 1.7 million viewers, a definite decrease, but also nowhere near the Tiger Effect. Furthermore, like Bolt and Phelps, Serena’s presence in the final doesn’t lift regular season events to major championship level.

Above any other athlete, the Tiger Effect stands alone in its impact in sports. In reality, the only modern athlete who can match what Woods means to golf is Michael Jordan. And what was proved on Sunday at the PGA was that the Tiger Effect goes beyond even wins and losses. America just wants to see Tiger Woods on the leaderboard on Sundays. Hopefully for him, and for the game of golf, it can continue into 2019.