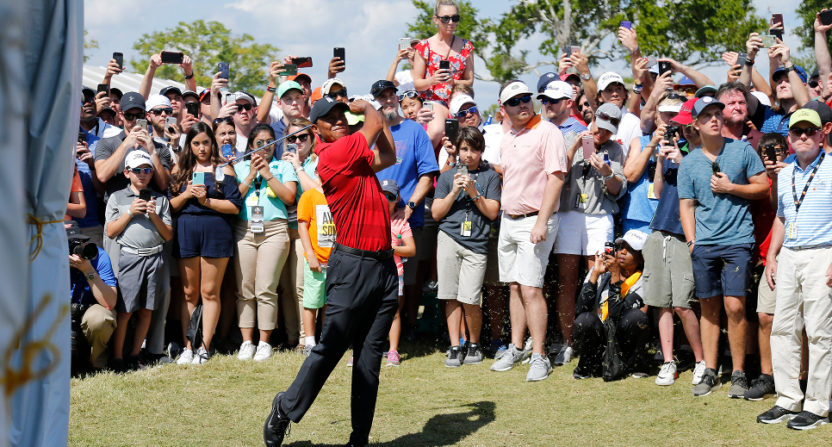 Sunday saw Tiger Woods record his second-straight top-10 PGA Tour finish for the first time since 2013, with an impressive run at the Arnold Palmer Invitational even keeping him in contention for the title until things went south on the 16th hole. And Woods’ run proved to be a very good thing for NBC, which saw a 136 percent jump in year-over-year overnight ratings. That continues a strong trend from last week’s Valspar Invitational, which also saw a big boost thanks to Woods being in contention. Here’s more on that from A.J. Perez of USA Today:

Tiger Woods merely being in the hunt the past two weekends led to a spike in ratings for NBC Sports.

…Despite going up against March Madness, Sunday’s final round of the Arnold Palmer Invitational averaged a 3.6 overnight rating — a 136% jump over the Tiger-less 2017 tournament.

NBC Sports said in a news release Monday that when the prior weekend’s final round of the Valspar Championship (5.1 overnight rating) is factored in, the two tournaments posted the highest ratings of any non-major PGA Tour broadcast since the 2015 Wyndham Championship. Woods played in that tournament, too.

More than 12 million minutes were streamed of NBC and Golf Channel coverage of the Arnold Palmer Invitational, a 683% increase compared to 2017, according to NBC Sports.

As Paulsen notes over at Sports Media Watch, non-major golf ratings tend to be much, much better when Woods is in the hunt for the title:

One would have to go back to the 2015 Players Championship (3.9) to find a higher PGA overnight when Woods was not in contention (again excluding majors).

Outside of the NCAA Tournament, Sunday’s final round was easily the highest rated sporting event of the weekend in the metered markets. It comfortably topped the NASCAR Auto Club 500 on FOX, which had a 2.4.

And that 3.6 is the best number for the Arnold Palmer Invitational since 2012 (when Woods won and the tournament posted a 4.8 final round; he also won it in 2013), and it’s even close to the 3.8 Fox posted for the final round of the U.S. Open last year. And as per Golf Channel’s release, coverage peaked at a 4.89 from 5:15 to 5:30 p.m. Eastern Sunday, impressive considering that that was near the end of Syracuse’s upset of Michigan State. That release also mentions that early-round coverage of the tournament was up year-over-year, too, so Woods’ influence appears to have extended beyond just those who tuned in Sunday:

So Woods being back in contention is a very good thing for networks broadcasting golf. And CBS will certainly be hoping that he’ll be in the hunt at the Masters in three weeks.