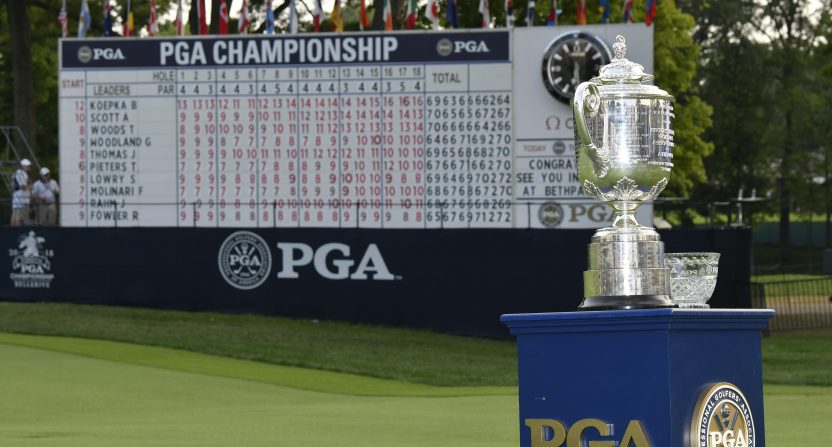 Next year’s PGA Championship will be the first one contested as part of the revamped PGA Tour schedule, meaning that the event moves from August to May. We’ve known that for a while, though; yesterday’s news that the 2019 edition will be Turner Sports’ final PGA Championship broadcast was less expected.

The PGA of America announced a new deal that will see the PGA on ESPN and ESPN+ for the first two rounds starting in 2020, with ESPN also handling morning coverage on the weekend before handing it off to CBS in the afternoon. It’s a deal that makes a lot of sense for ESPN; along with their annual Masters coverage, they’ll now be involved in the first two golf majors of the year, and they’ve landed more content for ESPN+.

This is an excellent deal for the PGA, and it’s frankly one that should have happened a long time ago. Turner had been involved with the PGA Championship for nearly 30 years, but while Turner does have a long history with golf, of late the early PGA coverage was their only event of the year, and it showed in their commitment to the broadcast.

Updating a tally here for 3rd year in a row: TNT showing 2 eps of Charmed and 4 of Supernatural while 1st round is up and running. Going live at 2pm on Thursday. https://t.co/sTGwreuPIv

That’s not to slight Turner, but they clearly didn’t have much incentive to push the envelope for golf coverage, and CBS has always trailed on that end too, despite the fact that golf essentially carries CBS Sports from the end of college basketball to the start of football season. The PGA Championship has always lagged as the fourth major, clearly a step down from the other three despite annually featuring arguably the strongest field of any golf tournament.

It’s easy to see why; it doesn’t have the tradition or prestige of the Masters, the history and national identity of the U.S. Open, or the global prominence of the Open Championship. It struggled to find an audience despite existing in August, a dead period in the sports calendar. The move to May might inject a bit of freshness to proceedings, as the viewing public won’t be worn out from a season of golf, but it also means competing with the NBA and NHL playoffs and the start of baseball.

The switch to ESPN will help. Turner (and CBS, to an extent) never really treated the PGA as an event. Viewers might question that, but if you’re broadcasting an event, why in the world would you want to do anything other than present it as something worth watching? ESPN doesn’t treat the Famous Idaho Potato Bowl as a joke, it leans into it and makes it feel like something worth watching. In fact, ESPN executive vice-president (programming and scheduling) Burke Magnus told Sports Business Journal‘s John Ourand they’re focused on championship events, saying “If they hand out a trophy at the end of it, we’re interested in carrying it.” And the PGA Championship is a lot closer to the national championship game than it is an early December MACtion bowl game.

ESPN will clearly not be showing episodes of Charmed and Supernatural with balls in the air. They might not come on at 6 AM and stay on throughout on linear TV, but it’s going to be a lot better overall, perhaps especially when you factor in the additional coverage available on ESPN+.

Why stop there, though? A change in network is a good thing, but it’s not going to vault the PGA into the same conversation as the other majors. It’s the fourth major, no matter where it is on the calendar. But that can be a strength, on multiple levels. There’s no need to remain beholden to traditional presentation, because no one associates the PGA with any sort of tradition. Why not experiment in ways golf observers have wanted for years?

Take this idea, from No Laying Up’s D.J. Piehowski, who caught a live exchange on the PGA Championship’s featured group coverage:

Which kind of makes you think: Couldn't the PGA lead the charge on a mandatory mic'ing of players? (Or at least players in featured groups.)

The event feels like it needs an identity, maybe it's being pioneers in getting fans closer than anyone else.

It’s exactly right. After a rocky 2015, FOX has done some great stuff with the U.S. Open since, and while it’s not perfect, their sheer coverage volume is a great example. And FOX’s usage of shot tracer technology (golf’s equivalent to the NFL’s first-down line in terms of broadcast innovation) pushed other networks to add more of it. ESPN might not have the freedom and CBS might not have the inclination to push things in that direction, but the PGA definitely should, because they have nothing to lose.

The PGA is big enough and important enough that the best players in the world aren’t going to skip it if they have to deal with more live microphones, and their broadcast partners aren’t going to shun the event if they’re asked to do things differently. There’s a real danger with the ESPN/CBS partnership that we essentially get all of the worst aspects of the Masters coverage (prepackaged narratives, dozens of shots from “Just a moment ago…”, Nick Faldo) with none of the Masters cachet to help wash it down, and the Masters just barely gets away with it as it is.

That’s the worst way it could go, and dedicated golf viewers are conditioned to expect the worst.

Sounds pretty incredible, but gonna have to give this the believe-it-when-I-see-it treatment. https://t.co/gUyjx7c4bx

There’s a more optimistic viewpoint, though, and it’s one where ESPN uses the freedom of the PGA as a golf broadcasting lab, and some of those changes become so popular that they seep into the Masters coverage, before pushing other networks to catch up, a la FOX’s omnipresent shot tracer.

Is it likely? Hard to say.

But it would definitely make the PGA more interesting to watch. And for a tournament that struggles in that department, it would be crazy not to try.