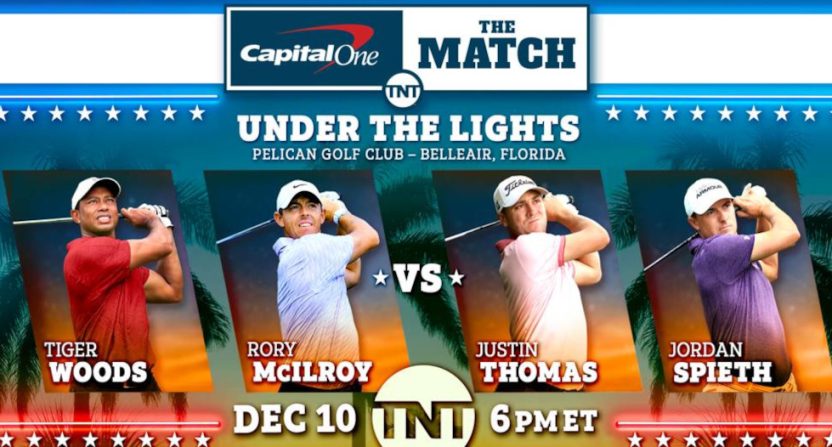 Warner Bros. Discovery Sports’ The Match golf franchise continues to roll on. That series has been through six editions so far, and they announced details on the seventh edition Monday, including a return to a lineup of pro golfers only. This The Match Under The Lights event will take place Saturday, Dec. 10 at 6 p.m. ET on TNT, and will feature Tiger Woods, Rory McIlroy, Justin Thomas, and Jordan Spieth.

The sixth version of The Match this summer featured all NFL quarterbacks (Tom Brady, Patrick Mahomes, Josh Allen, and Aaron Rodgers) rather than pro golfers, the latest in a shift away from just golfers. Brady and Peyton Manning played in the second one alongside Tiger Woods and Phil Mickelson, while Steph Curry and Charles Barkley joined Manning and Mickelson for the third one. But the seventh version is going back to all golfers. Here’s the WBD announcement, including that this will be at Pelican Golf Club in Belleair, Florida and that it will benefit Hurricane Ian relief efforts, adding to the nearly $33 million raised for various charities through the incarnations of The Match so far.

And here’s the video Woods announced this with:

Can’t wait to play in Capital One’s: The Match with @McIlroyRory against @JustinThomas34 and @JordanSpieth to raise money for Hurricane Ian relief. See you boys under the lights on December 10th. pic.twitter.com/IdaVY6HGV8

Woods played in the first two editions of The Match in 2018 and 2020, but has not played in the series since. He only returned to televised golf in late 2021 following serious leg injuries in a February 2021 car accident. And having him back feels like a big deal for this series; even at 46 and after that significant injury, Woods continues to draw TV numbers, and his involvement in The Match II back in 2020 helped push it to a cable golf record of 5.8 million viewers.

The rest of the lineup here is strong as well. This will be the first time any of McIlroy,  Spieth, or Thomas have appeared in the Match franchise, but they’ve been impressive on the PGA Tour and in majors, posting four, three, and two career major wins respectively. McIlroy is also currently number one in the Official World Golf Rankings, while Thomas and Spieth are eighth and 13th respectively. McIlroy will pair with Woods against Thomas and Spieth. (It is perhaps interesting that The Match went with all PGA Tour players here; that avoids potential controversy from selecting anyone who plays in LIV Golf, but it maybe further speaks to how there isn’t that much TV interest in LIV or its players despite Greg Norman‘s claims.)

As for the distribution of this edition of The Match, it will again center on TNT with simulcasts on TBS, truTV, and HLN. Bleacher Report will again provide “expansive content” on its platforms “in the run up to and during the competition.” Players will have open mics during the whole competition, meaning we may get some more f-bombs and other candid moments. The format, production, and commentator team are to be announced later. Capital One returns as title sponsor, and other partners include tournament organizer Excel Sports Management and Brady’s production company 199 Productions.