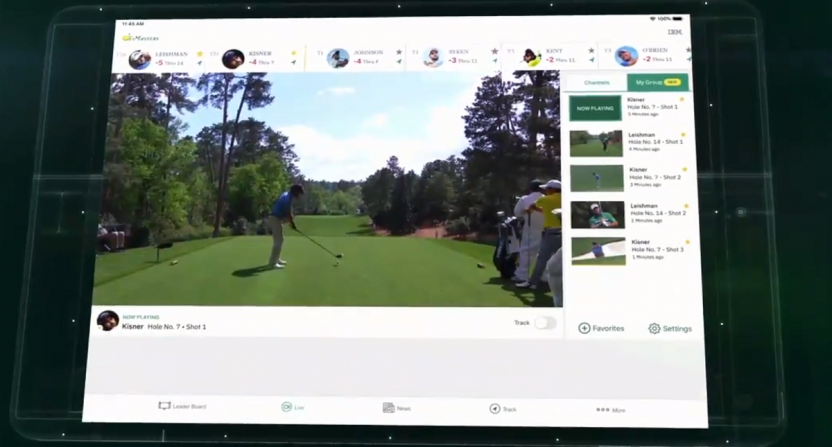 Let’s start with some potentially bad news for this weekend’s Masters.

Already postponed due to the pandemic, and finishing early on the weekend due to football commitments at CBS, there’s a chance that Hurricane Eta could force the tournament into yet another change in plans. Thursday’s opening round is most at risk, with rains and storms in the forecast overnight Wednesday and throughout most of the day as well.

This being Augusta National, they will certainly have multiple contingency plans in place, though the lack of daylight hours means making up for a washed out day won’t be easy. But, that’s the bad news for Masters viewers. The good news is that their streaming coverage has expanded again, this time adding three more featured holes (4, 5, and 6) along with last year’s ability to watch every shot from every player on either Masters.com or the tournament app.

The recent expansion of streaming coverage is wild considering the longstanding opposition to wire-to-wire broadcast coverage. (Assuming Thursday’s round happens, linear ESPN won’t be on the air until 1 PM, though ESPN+ will also carry the featured groups and holes coverage options in addition to the Masters site and app.) For an organization that has an earned reputation for obstinance, Augusta National has actually been the catalyst for a lot of positive changes in golf broadcasting, especially on the streaming side. This year is maybe their biggest step, though, if what’s being promised turns out to work: the ability to curate an entire streaming broadcast for yourself.

Building on the “every shot from every player” option last year, this year the Masters is offering a My Group channel, giving anyone the option of selecting the group of players they want to follow throughout the round, and offering every one of their shots.

Every shot. From every player. On every hole. My Group is the newest feature in @TheMasters app, using @IBM technology to bring you all of the action this year in Augusta. Download the app now and get your My Group ready: https://t.co/AWhFwOa9pI
#IBMSports #IBMPartner pic.twitter.com/uL70Lr0DrH

There’s also a video on the Masters site, narrated by Jimmy Roberts, though it touches on most of the same features. (It doesn’t, though, include someone firing up the app to watch just as they’re seemingly about to start driving.) In short, though, what this option promises to do is allow viewers to curate their own viewing. Want to watch just Tiger and Phil play the entire course? You can do that. Want to watch every shot from Sandy Lyle, for some reason? You can do that, too, along with building your own mix of likely contenders and personal favorites.

What it could mean, in theory, is a way for people who grow tired of the traditional broadcast zeroing in on a few players, or missing key shots, or focusing on putts more than anything else (or any number of other coverage critiques on offer) to circumvent that and just watch the golf how they want to watch it. That the channel also promises to automatically fill downtime among your selected group with shots from the leaders and “Great Shots” is a bonus, as is the fact that you can even turn those off if you want as much control as possible over your viewing experience.

Obviously not every tournament and course has the resources or motivation to do this, but look at what happened once Augusta debuted their every player/every shot option last year. The PGA Tour’s flagship tournament, the Players, also put it into effect, to good reviews. (For only one round, of course, but still!) If this option delivers on what it aims to (and, hey, it might not, but it’s hard to imagine Augusta National debuting a feature that falls flat, they’ve certainly had time to test it out), it might be a great way to thread the needle between diehard golf fans and casual viewers.

There are other new innovations this week, including overhead shots on the par 3 16th hole that should look fantastic, but if My Group works as a true a la carte alternative to the broadcast, it could really be a preview of what golf coverage looks like going forward.