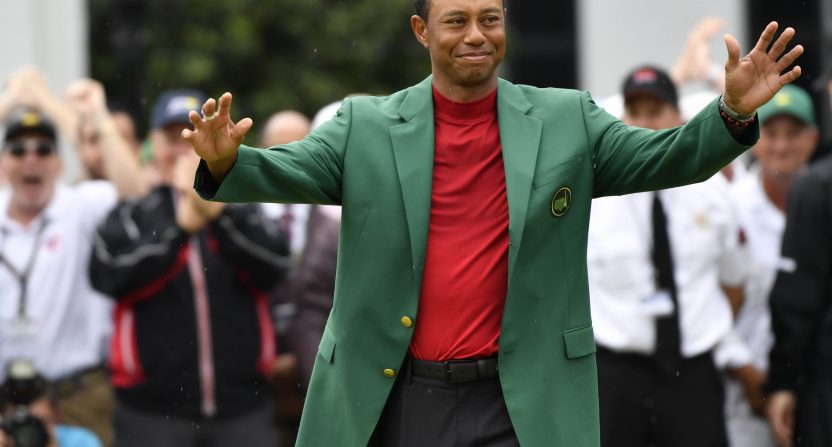 ESPN’s Masters crew took part in a conference call with reporters, which focused mostly on what they expected to see play out on the course.

Obviously Curtis Strange, Andy North, and Scott Van Pelt are more than capable of analyzing that side of the game, but for our purposes one question stood out as to the coverage itself. The biggest story in golf right now is, as it so often has been the last twenty-five years, Tiger Woods. Yesterday, Woods took his private plane to Augusta, playing eighteen holes with his son Charlie and Justin Thomas. It turned into a frenzy on Twitter, as golf got into flight-tracking mode.

According to a report from ESPN’s Mark Schlabach, Woods looked good, walking the whole round. At this point, it feels like he is going to play, which is a fairly shocking turnaround, all things considered. Just over a year ago, he nearly lost a leg after a single-car accident in Los Angeles. In the aftermath of that news, most of the discussion was on whether he’d be able to walk again. This past fall he played in an exhibition event with Charlie, though, and his game looked surprisingly sharp.

Now, months later and with the Masters a week away, it feels like all signs are pointing to Tiger giving it a shot. This, obviously, is a very important decision not just for himself or for fans, but for the networks covering the event. ESPN has the first two days of the Masters (along with the Par 3 Contest on Wednesday), though it’s essentially a CBS broadcast, with a few ESPN personalities joining the usual CBS group and production crew.

On the ESPN call, Scott Van Pelt summed up what his presence means for coverage:

The question was asked about if Tiger were to play, how does it change things. Well, it changes everything. He’s the singular player in the sport. There’s people tracking his plane yesterday like it’s an SEC coaching search, and just the idea of him going up there and what’s going on and is he going to try, and if he plays, then that becomes its own lane of coverage. It’s Tiger. We all know what he is and what he represents, and if he’s going to try to play after what happened and the car accident — by the way, fellas, it’s not just him playing a tournament, it’s him playing the Masters Tournament. It would be quite something from a coverage standpoint.

It’s honestly not a stretch to say that Tiger returning to play at Augusta would be one of the biggest stories of the sports year, no matter how he performed. The same was true when he won out of nowhere in 2019. Woods still maintains a grip on the entire sport unrivaled by anyone. As SVP later put it:

And yet I was texting with a player yesterday and joking that if Tiger plays you guys could play nude and no one would know you were there. And I’m kidding, obviously, but…

There’s actually a much wider discussion point, that’s been ongoing for decades, as to whether Tiger was actually too much of a focus for golf media and golf broadcasting. In this specific instance, though, given all that’s happened since his victory in 2019, there really might not be a saturation point if he does indeed play. CBS would certainly be hoping he makes the cut for the weekend, or if not that he sticks around to do a segment with Jim Nantz and Nick Faldo on Saturday or Sunday.

It’s crazy to think how one decision will lead to such a drastically different approach to the week for networks, but that’s the power of Tiger, even still.