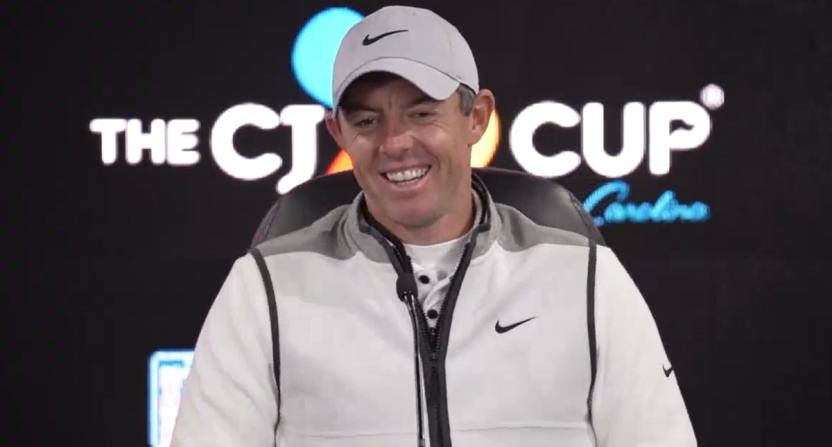 Rory McIlroy has been at or near the top of men’s professional golf for more than a decade now, an impressive feat considering he’s still just 33.

McIlroy played a big part in today’s moment of sports media wholesomeness, when he fielded a question from an unexpected source at his press conference. With the PGA Tour in South Korea for the CJ Cup, McIlroy’s presser was invaded by rising South Korean star Tom Kim. Kim recently became the second-youngest two-time winner in PGA Tour history, while also becoming a fan favorite at the Presidents Cup.

Oftentimes when we have athletes asking other athletes questions in settings like this, it’s more for laughs than anything. Kim, though, took the opportunity to ask a real question (with obvious personal relevance) about how Rory handled success at a young age. Rory, as is his habit, didn’t take it lightly, delivering a substantive, insightful reply.

The full response really is so much more than we usually get from athletes in any sport at what can be a fairly rote press function:

I didn’t have as much success as you’re having at such a young age.

Like I think when you start to have success at a young age, you’re going to — I think the biggest thing that I realized is managing your time. You’re going to be pulled in so many different directions. You’ve got one, two, three, four, I can see five sponsors on you at this point, right? So it’s just trying to manage your time to realize what got you to this position, right? Why are you a two-time PGA TOUR winner, why are you such a great player?

And it’s the time that you put into it and it’s the practice, it’s not losing sight of that. I think that’s the thing. I was speaking here just before you came in that I’ve almost found it easier to get to No. 1 in the world than staying there. I think staying there is harder. I think you’ve got a bulls-eye on your back, you’ve got to work harder, everyone’s coming after you.

That’s the one thing I would say is just managing your time and not forgetting why you’re in this position and why you’re so lucky to get to play with me the next two days. And that was a joke that went over everyone’s head.

To go along with that, we got this embrace which saw McIlroy confirm that he was indeed watching Kim’s heroics for the International team at the Presidents Cup:

With seemingly all of the golf headlines in 2022 focused on various bits of infighting and unsavory dealings related to the LIV/PGA Tour schism, it’s nice to have a moment like this one. Golf fans are likely hoping for more of this going into the new year.