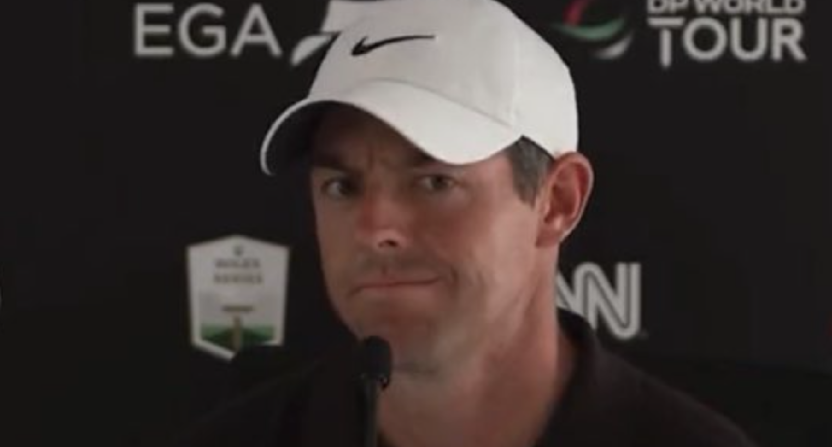 The world of men’s professional golf is probably more interesting off the course than on at this specific moment.

That’s not necessarily a good thing for the sport (though it might be for Netflix), but it does lead to some winter entertainment at a time on the calendar that golf traditionally doesn’t have the reach to command headlines.

Take, for example, this week’s controversy in Dubai. The Desert Classic is a rare event that will see some crossover between PGA Tour stars and LIV players (the DP World Tour, formerly European Tour, can’t ban LIV players the same way the the PGA Tour has done.) That mixture led to a moment on the driving range that saw Patrick Reed attempt to greet Rory McIlroy, get stonewalled, and then flip a tee at him as he walked away. Is there video? Of course there’s video.

On the scale of stupid driving range interactions, this hardly qualifies as fireworks. But with this much political kindling it doesn’t take much to start a much bigger fire; Rory was obviously going to be asked about this, and because McIlroy has a well-earned reputation for telling it like it is, he didn’t play around, noting that Reed’s actions have led to consequences.

If you want to add another one to the list, Reed also subpoenaed JT two days before his wedding.

McIlroy addressed the situation accordingly, noting that Reed seems to be living in a world where he doesn’t expect to face any consequences for his own actions. (In fairness to Reed, that’s been a well-tested strategy for his whole career.)

Social media, big story that a tee peg was thrown your direction at Patrick Reed. That’s the story on social media. From your point of view, what happened?

RORY McILROY: Nothing. Patrick came up to say hello and I didn’t really want him to. In my — from my recollection, that was it. I didn’t see a tee. I didn’t feel a tee. Obviously someone else saw that. But it’s definitely a storm in a teacup. Obviously nothing — I can’t believe it’s actually turned into a story. Yeah, it’s nothing.

There’s also an element of naivete for someone to think he’s doing what he is in the world at the moment; that everybody should be able to get on with what’s happening.

RORY McILROY: Yeah, I was subpoenaed by his lawyer on Christmas Eve. So of course, trying to have a nice time with my family and someone shows up on your doorstep and delivers that, you’re not going to take that well.

So again, I’m living in reality, I don’t know where he’s living. If I were in his shoes, I wouldn’t expect a hello or a handshake.

Reed’s interpretation of events is, shall we say, different:

It’s rare to get such an unfettered glimpse at utter self-delusion, but Patrick Reed has delivered that in droves for a long time now. This incident, though, is a stretch even for him, but given his entire, well, everything, it’s still believable that he could view events the way he apparently views them: Reed being the mature bridge-builder, with Rory as the petulant asshole.

“Rory just looked down there and was messing with his Trackman and kind of decided to ignore us,” Reed said, according to Golf Digest. “We all knew where it came from – being part of LIV. Since my tees are Team Aces LIV tees, I flicked him one. It was kind of a funny shot back. Funny how a small little flick has turned into basically me stabbing him and throwing a tee at him.

“He saw me, and he decided not to react. It’s unfortunate because we’ve always had a good relationship. … But it’s one of those things, if you’re going to act like an immature little child, then you might as well be treated like one.”

Less believable: that outside observers could take his stance at face value. But one media member in Dubai has apparently done so, asking McIlroy an absurd question that generated a perfect response.

Did Patrick Reed himself ask this question? pic.twitter.com/rdWTDOBSVG

Rory’s face there managed to achieve a depth of expression best described as Muppet-like bewilderment. It’s perfect. Kudos to the ASAPSports transcript writer, too.

Not sure what award @asapsports should win for this. Maybe not just one. https://t.co/CxtXMC0G8b pic.twitter.com/xR4rfL2ovN

That’s the platonic ideal of incredulousness.

Patrick Reed to everyone he has just sued pic.twitter.com/xBdYV8CQIn

Which is justified! Patrick Reed has never been great at reading the room, and has famously mistaken the meaning of the word friendship on multiple occasions. Rory refused to be polite to Reed, who then confirmed Rory’s decision by flipping a golf tee at him and then running to give a quote about how McIlroy is acting like an “immature little child” to a reporter.

Rory’s responses both in the moment and in the press conference are endlessly refreshing to anyone who has had to suffer through people who feel entitled to grace despite never once doing anything to earn it.

And, please, let’s keep that reporter out of the briefing room going forward.