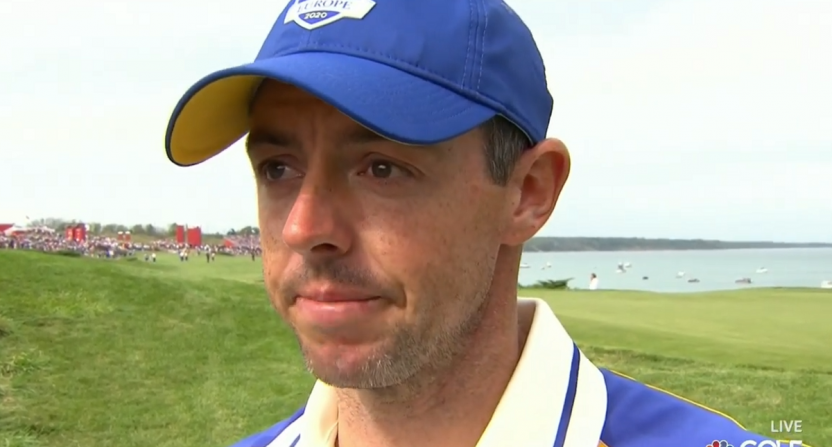 Rory McIlroy and the rest of team Europe had a week to forget at the Ryder Cup.

Effectively handled by the Americans for three straight days, the event was clinched unceremoniously today in the middle of the afternoon with plenty of matches out on the course. Rory McIlroy, traditionally a strong Ryder Cup player and someone the Europeans desperately needed to play well this week, did not have a good visit to Wisconsin. After being blanked for the opening two days, he did manage to put up a meaningless point on Sunday, defeating Xander Schauffele in Sunday’s leadoff singles match.

After, McIlroy gave consecutive interviews, first to Sky Sports and then to Jimmy Roberts and NBC. He broke down in both.

Rory McIlroy in tears and hardly able to speak on Sky Sports — "I should have done more for them this week. I just can't wait to get another shot at this."

The whole thing is telling, and credit to Jimmy Roberts for being comfortable enough to let Rory’s emotions come through rather than redirecting the topic away. Rory’s “I couldn’t give a shit” about individual competitions was both very revealing and, perhaps, a bit of confirmation; he hasn’t won a major since 2014 and has just one win worldwide from 2020 on. He hasn’t been “bad” by any standard other than the one he has set for himself, but in individual sports, that’s what we focus on, and Rory’s team form ended up being a continuation of that individual run.

He was just sort of a guy out there for a few days.

Whereas McIlroy’s shrug-it-off mindset is probably healthy for individual tournaments, playing poorly at an event like the Ryder Cup clearly means a lot more to him. He calls it the best event in golf, after all, and Rory is usually more measured with his words than most golfers.

Considering the overall lack of pop the Ryder Cup had this year (not helped in any way by the broadcast, a slog of commercials and missed shots and a kind of generic cheap feel throughout), this kind of emotional moment might end up standing out, especially in the context of McIlroy’s career narrative.