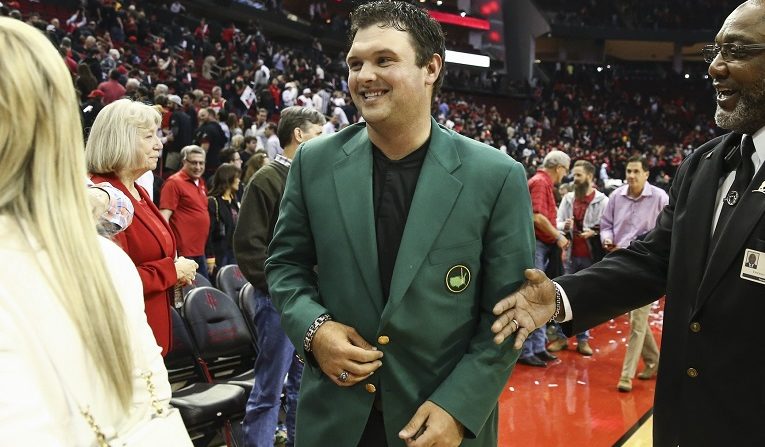 Patrick Reed has now worn his Masters green jacket at a Knicks game, an Astros game, a Rockets game and at a Chick fil-A Drive Thru. pic.twitter.com/gfU2TKNCRB

That led a surprisingly large swath of people to mock Reed for doing so. Here’s one example:

Lol Patrick Reed wore the green jacket to the Rockets game. So this is like wearing your letter jacket to the mall in high school times 100, right? pic.twitter.com/sfyZVynin3

Even the @NBCSports feed did, with “we get it already” and a picture, though that tweet has since been deleted.

Here’s the thing, though: every Masters champion wears the green jacket different places. It’s the whole point of having a wearable trophy. And it’s the freaking Masters, too! That’s a lifelong dream for just about every golfer, and a fantasy for plenty of people who’ve never broken 100. Phil Mickelson famously wore it while taking his family through a Krispy Kreme drive-through.

Jordan Spieth wore it to a Texas football game:

What a game tonight!! We leave you tonight with the Eyes of Texas from Masters and US Open Champion @JordanSpieth pic.twitter.com/vjKzzQV31z

And the last two champs, Danny Willett and Sergio Garcia, both wore it to Wimbledon.

And yes, he wore the Green Jacket. pic.twitter.com/EWSJ7QNI3d

This is tradition! And many of those events took place months after the Masters win, not within a week as all of Reed’s have so far. So why the different coverage?

It’s actually not a tough question: a lot of people just don’t like Patrick Reed. Most casual fans likely first came to know him when Shane Ryan’s book was published; the first excerpt to go big was the section on Reed being a villain. And there are plenty of stories both on and off the record of Reed being difficult to work with. He’s burned through agents left and right, for one example.

Reed also currently doesn’t have an equipment deal, which may or may not have something to do with how he’s treated his past equipment partners. And in the wake of his Masters win, the main topic of conversation was this GOLF.com story from Alan Shipnuck detailing his estranged relationship with his family. Reed has long refused to comment on that topic, and did so once again when Shipnuck asked him about it at the press conference after his Masters win.

The story is certainly interesting, and plenty of people within golf were likely thrilled it was out there. But it’s certainly fair to wonder whether that type of piece gets written about more popular, likable players. It’s easy to write a story like that about Patrick Reed, but had Phil Mickelson won, would anyone have asked him about the massive gambling debts that got Phil involved in a shady stock market deal? Probably not, even though it’s a much more relevant topic than whether or not Patrick Reed has spoken to his parents.

But people love Phil Mickelson! And he’s earned it, too, for the most part. So things like that slide off of him, while people go out of their way to paint Reed as a clown for wearing the green jacket to a basketball game. The lesson, as always, is that the media (social and traditional) tends to cover people they like more favorably, fair or not.

There are plenty of legitimate reasons to be annoyed by Patrick Reed. Wearing the green jacket everywhere shouldn’t be one of them.