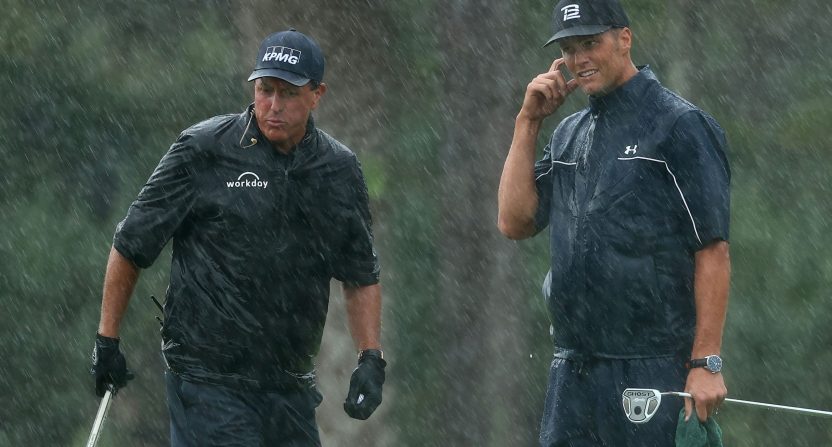 Phil Mickelson is now 1-1 against Tiger Woods through two editions of The Match, an event name that’s only going to get more awkward for every sequel.

And if Phil has his way, there will be many more editions, perhaps even on an annual basis. That’s according to this Los Angeles Times column from Arash Markazi, which notes that Phil and Tiger Woods signed deals for three events ahead of the first iteration in 2018. Considering the strong ratings and overwhelmingly positive feedback to the 2020 edition with Peyton Manning and Tom Brady, it seems likely that Phil will get his wish.

“What if Tiger and I were to team up and take on two younger players, or what if we were to team up with younger players and have it be a real high-level golf competition?” Mickelson said. “I think there’s a market for that. But you have to have some personality in there, too, so a guy like Justin Thomas showed how funny he is and he would add a lot to an event like that.

“I think you could showcase guys like Steph Curry and Michael Jordan or Tony Romo and Patrick Mahomes, who are all good golfers, elite talents and have great personalities. Those personalities are going to come out with this event. Or you could have someone who loves the game and is competitive but is really entertaining like Larry David and Bill Murray. I think that could shine.”

Both versions drew in casual fan interest, but The Match II found a winning formula with team banter, production strategy that allowed for fun interaction and an emphasis on the mic’d up players, carts speeding up play (and serving almost as interview rooms between shots), and perhaps most importantly making the focus on charitable efforts instead of Tiger and Phil playing for $9 million.

Would this version have drawn that well if it weren’t a rare example of live sports featuring big names during the pandemic? That’s impossible to say. But the audience was such that future versions seem almost inevitable, especially considering Mickelson’s appetite for more of them. It sounds like the ideal scenario would be an annual event.

The original plan for Sunday’s event, which was held at Medalist Golf Club in Hobe Sound, Fla., was to hold it on June 2, a day after what would have been Game 7 of the NBA’s Western Conference finals, with both events airing on TNT. The COVID-19 pandemic not only changed the schedule but changed the focus to a charitable event, which Zuriff believes will continue to be a part of “The Match” format moving forward.
“We like this event for the day after Thanksgiving,” (Bryan) Zuriff said. “We envision it once a year depending on schedules and health but we like the charitable component of giving back.”

Mickelson has continued his media tour on the subject, as well:

Phil Mickelson said that he's received a lot of calls to do another Match with Tiger/athletes.

Mickelson is clearly more interested in this than Tiger, though, for a variety of reasons; at 49, Phil’s time as a competitive draw is growing thin (although his longevity is incredible.) Whether a Match featuring Phil but not Tiger sustain a franchise is tough to say, but then again, that’s the dilemma facing golf broadcasting in general. Still, as long as Turner and the people behind The Match are putting out products that worked as well as Sunday’s did, there’s going to be demand for them.