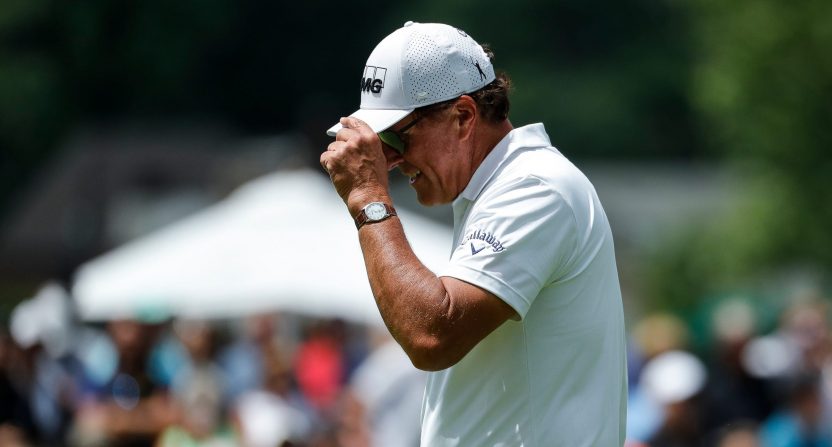 Phil Mickelson has been at the center of the biggest story in golf over the weekend, one that had begun to bleed into the mainstream sports consciousness as well.

He’s one of the few non-Tiger golfers that can do that, which he’s used to his considerable gain over the years, boosting his platform with things like a well-received ManningCast appearance. This time, though, it was for a much less-flattering story: Mickelson revealed in quotes to golf writer (and author of an upcoming book on Mickelson) Alan Shipnuck that not only had he paid to draft founding documents for a golf tour backed by the Saudi government, but that he’d done so while knowing full well the sort of people he was getting involved with.

And, on top of that, he then made sure to note that he wasn’t even sure he wanted the venture to succeed; instead, it was mostly a tool Mickelson was attempting to use to force the PGA Tour into various changes that would pay out more money to big-name players at the top of the sport.

Here’s the money quote, via Shipnuck at the Firepit Collective:

“They’re scary motherfuckers to get involved with,” he said. “We know they killed [Washington Post reporter and U.S. resident Jamal] Khashoggi and have a horrible record on human rights. They execute people over there for being gay. Knowing all of this, why would I even consider it? Because this is a once-in-a-lifetime opportunity to reshape how the PGA Tour operates.”

Over the weekend, a parade of Phil’s fellow PGA Tour stars came out against the idea, including players like Bryson DeChambeau and Dustin Johnson who had previously been considered very likely to join. With one ill-advised decision to open his mouth, Mickelson had not only tanked whatever leverage he may have had, he’d outed himself as at best working both sides of the fence in bad faith (with one side of the fence being the government of Saudi Arabia.)

Mickelson had been uncharacteristically quiet until today, when he released a lengthy statement of apology in which he accuses Shipnuck of not only publishing off-the-record quotes, but doing so out of context. Here’s Mickelson’s statement:

Phil Mickelson has released a statement surrounding recent comments about Saudi league, PGA Tour: "It was reckless, I offended people, and I am deeply sorry for my choice of words." pic.twitter.com/oeg7JQPmfu

Mickelson appears genuinely chastened by the entire affair, including the mention that he needs to take some time away from competitive golf. (There’s the chance, of course, that the PGA Tour encouraged him to do this as well, either formally or informally. The Tour doesn’t announce disciplinary action, so we might never know officially.) But it’s not entirely contrition; pointing the finger at Shipnuck feels especially rich here. The context point is nonsense; Shipnuck published entire paragraphs of Mickelson’s thoughts on this, and it’s been a very loud rumor in golf for years now that Phil was involved in doing exactly what he said he was doing here.

As for it being off the record, that would certainly be an entirely different debate, except for by any reasonable standard he was on the record.

The 'off the record' piece of this is completely false and I'll have more to say on that shortly. https://t.co/7cogbJlneK

Shipnuck noted this in the initial piece, too, likely anticipating the firestorm this would create for Mickelson and possibly predicting Phil’s likely defense, too:

Mickelson has a compulsive need to be seen as the smartest guy in the room. Not once did he say our conversation was off-the-record or on background or just between us or anything remotely like that. He simply opened a vein.

There’s no such thing as a default off-the-record position.

Just a quick journalism thought here for anyone reading this who isn’t aware: “Off The Record” is a two-way agreement between journalists and subject. A subject doesn’t not get to declare something OTR after the fact or just assume it is such without discussion upfront. Carry on. https://t.co/2q0uTx6Cjg

Even with his tail between his legs, Mickelson can’t help but blame someone else. It’s been quite a wild turn for Phil, coming off the highs of winning the PGA Championship in May to this, and there’s a chance that we’re going to learn more negative things in the near future.

What a stunning turnaround for someone who is legitimately a living legend of his sport.