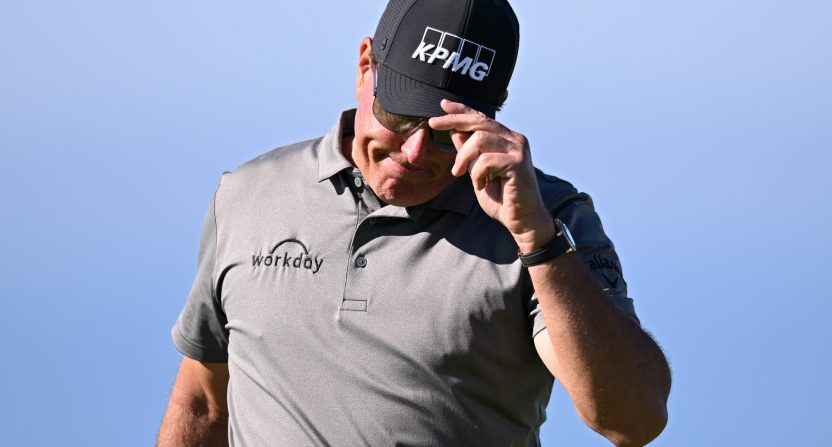 Phil Mickelson has been in exile from the world of golf (maybe self-imposed, maybe suggested/demanded by the PGA Tour, maybe both) ever since comments on the Saudi-backed LIV Golf tour went viral.

At the time, Mickelson seemed to suggest that his interest in playing for the blatant sportswashing effort being packaged as a disruptive golf tour was simply a leverage ploy in an effort to remake the PGA Tour in an image more to his liking.

Since facing the backlash (which included admonishment from fellow players and being dropped by multiple sponsors), Mickelson had gone radio silent, and wasn’t included on the first list of players revealed to be teeing it up in this week’s inaugural LIV event in London. That changed on Monday, with Mickelson officially joining after receiving a massive bag to do so.

Phil Mickelson officially listed in the field for the LIV Golf opener in London.

Hearing from a source that Mickelson signed a contract Saturday night worth ~$200 million.

Mickelson announced the news with a lengthy statement:

In addition, Mickelson gave an interview to SI Morning Read’s Bob Harig. Both of those, along with the official LIV news (which everyone expected), paint a picture of someone who has learned absolutely nothing from the entire experience.

This isn’t even purely from a moralistic standpoint, although to be clear, taking $200 million from the Saudi government program designed to help rehab their human rights record is objectively the wrong thing to do. Set all that aside, though, and Mickelson’s quotes reveal someone who hasn’t even learned the PR lessons he should have learned.

Phil empathizes with this point

In his quest to remain the affable family man most of his public image is built on, Mickelson is instead channeling the remainder of his known persona by risking his entire public image in a doomed quest to pull off an impossible play. Here’s Phil’s answer when Harig asked him about how he justifies joining the LIV effort now after having admitted he’s aware of their financier’s atrocities:

SI/MR: The Saudi involvement through the Public Investment Fund and backing of LIV Golf is a big issue for the series. How do you square that relationship and going forward with this?

Mickelson: “I certainly do not condone human rights violations. And addressing what happened to Jamal Khashoggi is awful. But I have seen the good that game of golf has done throughout history. And I really believe that LIV can be good for the game of golf as well.’’

Mickelson had months to prepare for getting this question, and yet somehow the best he could do was slightly repurpose his original stance, trying to position himself as some kind of agent for good, somehow suggesting that he’s going to change both the world and the game of golf for the better by…taking $200 million to play 8-10 no-cut, small-field events per year.

This was the one question Mickelson had to know he was getting, but there’s no real contrition, no real growth, no real change in any way. Again, just from a pure media strategy/damage control standpoint, it’s an atrocious response!

His entire statement is in a similar vein, trotting out his family and gambling issues as shields, as though they’re relevant to anything that led to Phil’s current perception. As with the entire LIV venture, Mickelson found some friendly support among members of the media, all too willing to jump on a possible redemption arc here that ignores the fact that Phil is facing consequences for nothing but his own choices and hubris.

(Also, for the anti-cancel culture crowd, Mickelson being “canceled” here means he signed a deal for $200 million. What a hardship he’s facing!)

While some in the media might rush to push a more palatable narrative (especially those who have sensed the dollars available for supporting the LIV effort), it’s important to not lose sight of what Phil has done here.

Disappearing for months and skipping both the Masters and the PGA Championship to avoid facing questions, then attempting some transparent misdirection by citing his wife, family, and history of a gambling problem while not even bothering to change his bad faith PR spin strategy isn’t a sign of understanding or personal growth. It’s cowardice.

The irony, of course, is that a majority of fans don’t even know what’s happening. Television coverage has been loath to discuss the LIV venture for a variety of reasons, many of which involving the networks having rights agreements with the PGA Tour, which has taken an understandable hardline stance against their deep-pocketed upstart rival.

That means many casual fans aren’t likely to know the ins and outs of Mickelson’s absence, especially if he still plays the major championships. His legacy might remain mostly intact, to people who aren’t paying that much attention. It’s inaccurate to say Mickelson is shamelessly doing any of this. For the first time in forever, he seems to be acutely aware of how bad he looks here, hence the hiding.

But feeling a sense of shame isn’t the same thing as being sympathetic. Phil hasn’t earned that here at all. If he wants to go knock it around shitty golf courses with a bunch of aging and/or irrelevant players for obscene sums of money, that’s his right. But he and anyone in media carrying water for him or the LIV enterprise in general deserves all the criticism they’re getting and more.