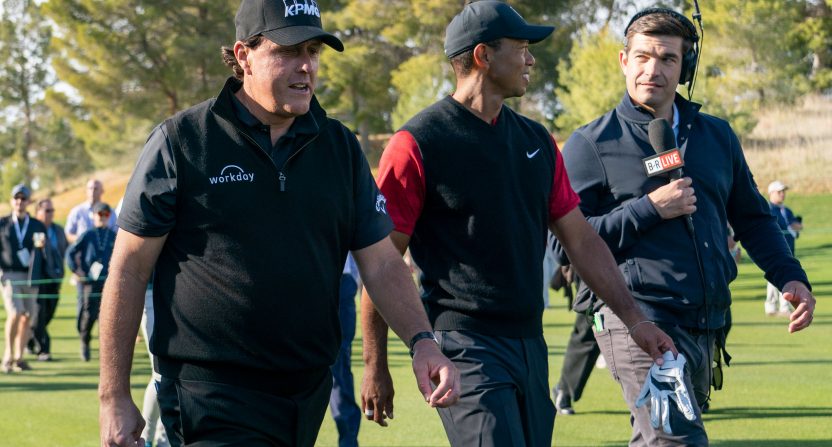 The PGA Tour’s televised product hasn’t changed much over the years. There are a few additions and tweaks, and the now-widespread use of shot tracer has been a true innovation even as some networks lagged behind others in their implementation.

Now, the Tour (presumably in conjunction with their broadcast partners) is experimenting with something new: interviewing players on the course during rounds. That’s via AP writer Doug Ferguson, who also notes the concept will start on a volunteer basis:

Several years ago, it asked players in contention on the weekend to allow for TV interviews before their rounds, usually as they were arriving or leaving the practice range. Now they are looking for volunteers willing to do interviews on the course during their rounds.

It’s in the experimental stage at the Sentry Tournament of Champions, and the willingness to take part depends on the player.

Of course, it’s that volunteer thing that could be an issue. Justin Thomas outlined the reasoning a lot of players will likely refuse to do it:

Thomas talks plenty during his round, usually to himself or with caddie Jimmy Johnson. The idea of stopping for a quick interview was not appealing to him.

“I’ve just been asked about it,” he said. “I said, ‘No.’ It’s not me. I do a lot of self-talking. That’s mine and Jimmy’s time, whether we’re talking about whatever, or even the next shot. For me, there’s no benefit. It’s only going to make me look worse.”

Rory McIlroy similarly shot down the idea that he’d be open to it, which is unfortunate to hear from two of golf’s biggest young stars. From their perspective, you can see how it might make sense; they’re playing for a lot of money every week, and professional golfers abhor a disruption to routine, no matter how small. The issue, as always, is that what’s best for golf on the whole might sometimes require the pros to do things a bit differently. Marc Leishman seems to understand why being open to change is better long-term:

“If they do end up having them, my advice would be to have someone who has played on tour to do it, to be a little sensitive of the questions and the timing of the interview,” Leishman said. “But anything where you can be more accessible to the viewers is a good thing. We want to bring more people to the game. It might be a way to give more insight to what we’re thinking at the time.”

For too long, golf broadcasts haven’t evolved. CBS will still use the same Bruce Hornsby song during a graphics package while Nick Faldo drones on, there will still be an odd focus on showing players making tap-ins as opposed to hitting full shots, and there won’t be enough live golf overall. Most sports coverage has evolved over the last few decades in an effort to remove the filter between the audience and the action to the highest degree possible. Golf coverage has instead embraced the filter.

That’s what made the initial promise of The Match so interesting. Yes, it was just two guys, but the chance for constantly live mics and on-course interviews felt like a real attraction. It sort of worked out that way, and in fact would have worked better if the only audio was on the course, even if it was sometimes stilted and artificial. There’s also the fact that answering a few questions from David Feherty while there’s a three-group wait on a teebox isn’t going to be too much of a taxing scenario for players.

Hopefully this will turn out like Olympic golf, when many of the top stars initially thought it was a waste of time only to change their minds once they saw it in action. And to be fair, there are plenty of things that could be better about golf coverage that don’t involve increased player access.

But so much resistance to even this kind of small change is frustrating to people who are hoping for a much larger overhaul.