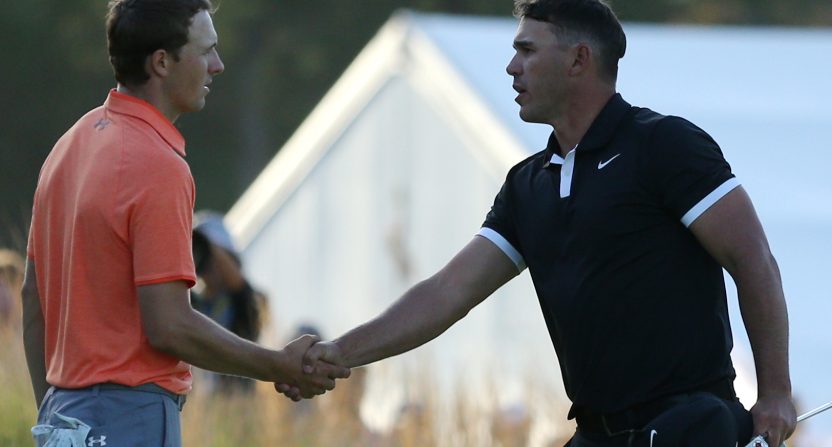 A few months ago, we wrote about news that the PGA Tour was partnering with Netflix and the team behind the wildly successful and entertaining F1: Drive to Survive for their own all-access documentary.

At the time, there were a few key questions still to be answered: which players would be participating? Would the major championships get on board to allow access? And, maybe most importantly, who would have editorial control? The PGA Tour, and many of its players, have a history of working very hard to avoid any hint of relatable humanity that might be seen by anyone as damaging to the brand.

In fact, access at all is at a premium. (I actually once couldn’t get a one-day practice round credential at the BMW Championship for a planned feature.) It’s a bit ironic, then, that all of a sudden the PGA Tour has apparently realized that reaching a different and younger audience is a good idea. The surging American F1 ratings this year being attributed widely to the success of the Netflix show are almost certainly a driving force in the Tour’s decision-making here.

So it was welcome news today when all three of those chief questions were answered as the PGA Tour officially confirmed the series was in production, and released the names of the players who have agreed to participate. To their credit, it’s about as diverse a group of players as could be hoped for in men’s professional golf.

That’s five of the top seven men’s players in the world (missing Jon Rahm and Patrick Cantlay, which is unfortunate as both those guys are fascinating), with names like Brooks Koepka, Jordan Spieth, Dustin Johnson, and Colin Morikawa standing out right away.

There are some obvious absences, too: Tiger Woods, Phil Mickelson, and Bryson DeChambeau chief among them. Tiger, though, isn’t really a regular player anymore and certainly not as he continues his rehab and recovery. Phil, meanwhile, is sort of his own thing; he and the PGA Tour have been at odds lately as he works fairly openly to promote at least one potential rival upstart pro league. Bryson has been semi-involved on that front, too, but he also is the biggest “protect my brand” guy out there right now, so this sort of project might not have appealed to him.

If anything, the fact that three of the most brand-conscious guys in the sport aren’t involved might actually speak to one of the other positive aspects revealed today: the PGA Tour, reportedly, won’t have any editorial control over the finished product. That’s according to Dylan Dethier at Golf.com:

“We do not have editorial control,” a Tour spokesperson said. “We will be involved to the extent that Netflix and the producers have the access they need to film at our events. We want them to make a great show, and we all agree the documentary needs to be as authentic as possible.”

The enthusiasm of Tour commissioner Jay Monahan has been crucial in getting to this point. People familiar with the process were impressed with his open-mindedness and that he became a crucial voice in bringing the project to market.

Dethier’s piece also notes that the four major championship governing bodies are on board with allowing access for those events as well, clearing the other major hurdle.

So, having answered those three questions, should people be excited?

Tentatively, yes. If it comes off as it sounds on paper, it could really make for a fascinating project. The list of players they’re going to be following for 2022 (some filming has apparently already taken place) is promising, with storylines up and down the list. It also features a few up-and-coming names that might get more airtime during the Netflix show than they get all season on traditional broadcasts. That’s what makes the F1 show work so well for Netflix; the first season saw top teams (at the time) Mercedes and Ferrari sit out as they felt it would be more of a distraction than anything.

Their absence allowed for smaller teams to take center stage, and that focus allowed for new fans to connect with the entire field of teams throughout the year, making battles at the bottom of the grid nearly as meaningful as those at the top. If this can help pull that off for golf, all the better. In fact, there’s really no downside for the PGA Tour if the series ends up entertaining.

The one issue that remains, though: the broadcast product itself is still objectively broken. What made the F1 show such a natural glidepath to gain a new audience wasn’t just the Netflix series. It’s that people interested could flip on qualifying or a race, and have a commercial-free hour or two of action-packed entertainment. In the United States, given time zones, it usually wrapped up in the morning or early afternoon on weekend days.

Golf doesn’t offer any of that. Golf also can’t promise that every player featured in the series is going to be playing every week. Squaring the potential differences is going to be the key if this project is going to contribute meaningfully to growing the audience (especially a new and younger audience.)

Still, for potential viewers, today’s new is pretty much all good. It’s just unfortunate we’ll probably have to wait another year to actually see it.